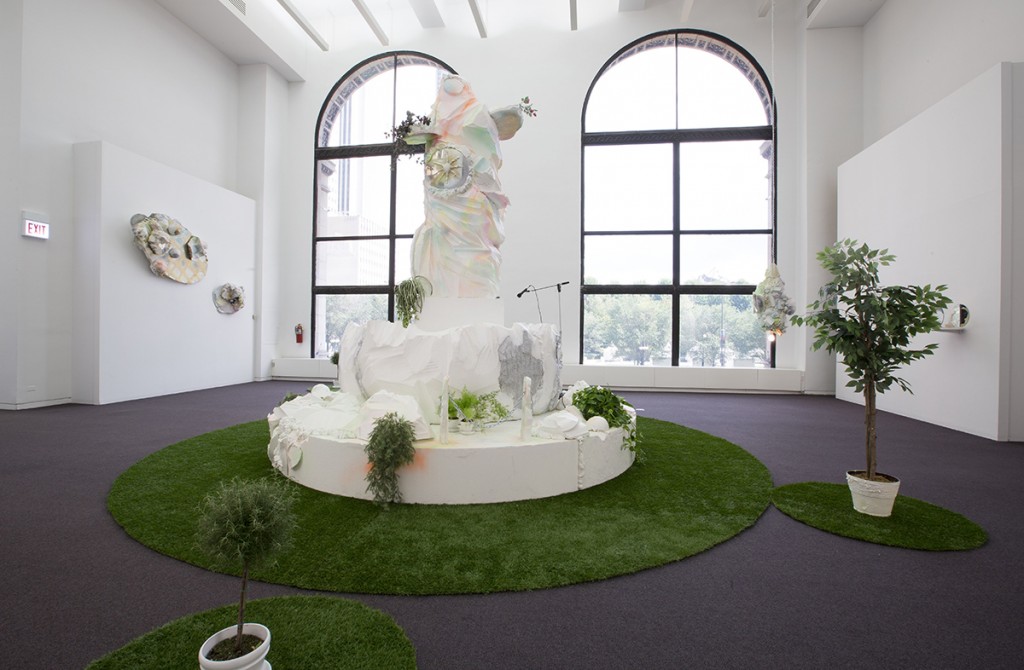 The John Simon Guggenheim Memorial Foundation (GMF) announced earlier this month that they have awarded 173 fellowships (two of which are joint fellowships) to diverse artists, scholars and scientists. In the foundation’s ninety-first competition for the United States and Canada, this year’s recipients were chosen from a pool of over 3,100 applicants. Among that talented group spanning over fifty-one disciplines with recipients ranging in age from twenty-nine to eighty-three is Sabina Ott, a Chicago-based painter and sculptor who is a professor of art at Columbia College Chicago. With the Guggenheim award, Ott intends to expound the scope upon her most recent work “here and there pink melon joy,” a site-oriented installation of paintings and sculptures completed in August of 2014 that was on display at the Chicago Cultural Center until January 2015.

Regarding the 2015 awardees, in the press release, the foundation’s president Edward Hirsch eagerly talks about this year’s fellows: “It’s exciting to name 175 new Guggenheim Fellows. These artists and writers, scholars and scientists, represent the best of the best. Since 1925, the Guggenheim Foundation has always bet everything on the individual, and we’re thrilled to continue the tradition with this wonderfully talented and diverse group. It’s an honor to be able to support these individuals to do the work they were meant to do.” The grant amounts vary from person to person, taking into consideration not only the foundation’s fixed budget but bring to mind the fellow’s other resources, purposes and the scope of their plans.

With the help of the award, Ott’s new project “there more than anywhere,” will aim to “create a large-scale outdoor environment that combines aspects of a pleasure garden, whose purpose is to encourage relaxation, with aspects of a playground, an environment meant to teach social skills to children,” explains Ott in her project proposal to the foundation. “Working on a large-scale outdoor environment will further my investigations into the relationships between people, places and things, as described by such authors as Jane Bennett, who expands on the ‘the distinction between organic and inorganic, or animate and inanimate, at the ontological level,’” calling the phenomena “enchanted materialism.” Ott will also experiment with sound and collaborate with musician Joe Jeffers in this new installation, implementing the medium not only in the surrounding space of the playscape but embedding into the sculptures as well. She will also be using some of the Guggenheim resources to create a large-scale installation at the Hyde Park Art Center opening in February 2016.

Ott has an extensive background in cross-disciplinary arts, getting her start in her hometown in Los Angeles, California after graduating with her Masters of Fine Arts from the San Francisco Art Institute in 1982. Her work can be found in renowned museum collections across the country including the Los Angeles County Museum of Art, the Oakland Museum of Art and the Whitney Museum of American Art. Her work has also been reviewed in Artforum, the New York Times and the Los Angeles Times to name just a few. “I am so grateful for the support of the Guggenheim Foundation and to my recommenders,” says Ott. “The award of a Guggenheim Fellowship will give me the time and resources to build upon the developments in my recent project and allow me to increase the scale and scope of my work in an impactful way for my career.” (Mahjabeen Syed)