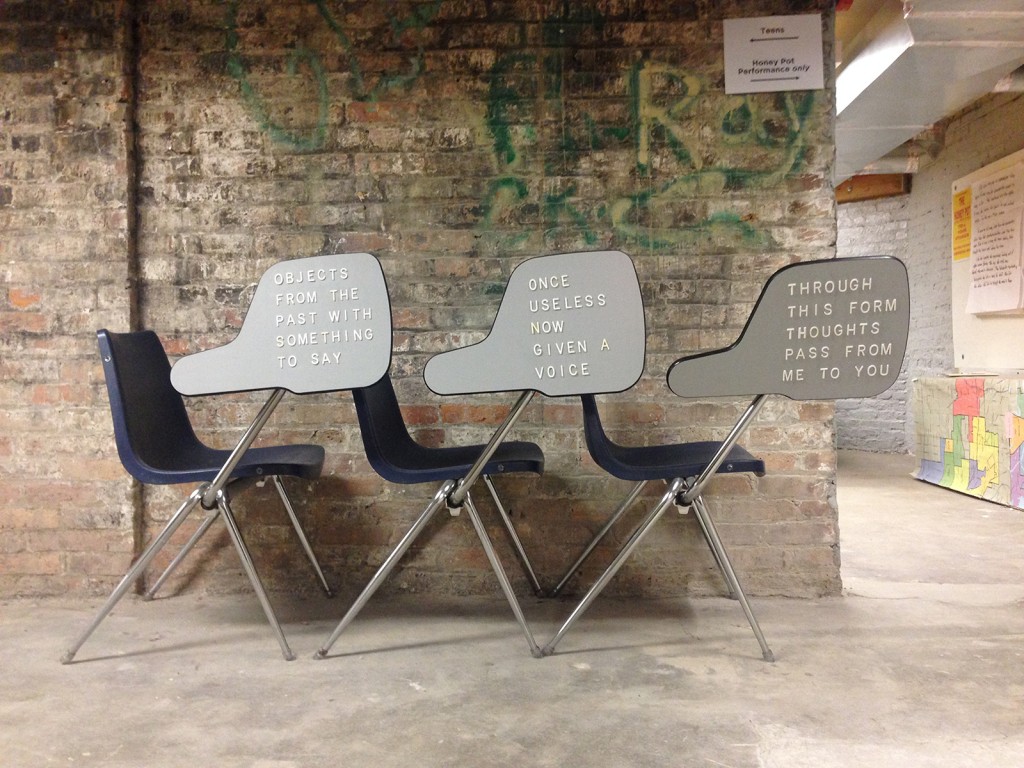 We’re excited to have Alberto Aguilar’s “Crossing Boundaries” text as the eighth in our Visiting Artist column, a recurring feature in which Newcity invites an artist to produce a text in relation to their current art practice. Here Aguilar adds writing into an exploration that brings all aspects of his life into his residency at University of Chicago’s Arts Incubator.

One-thousand words are what I am allotted to write this so I will not waste one and use all. Words have the ability to get one from the top of the page to the bottom and if arranged just right communicate something clearly to the reader.

I am a Crossing Boundaries Resident Artist through the Arts Incubator and the Center for the Study of Race, Politics, and Culture. This began in January and will last for five months. When given this title I could not fully understand what it meant or what boundaries I should cross. Rather than be overtly political I decided I would simply fold all aspects of my life into this residency. During the five months all shows that I am in, my teaching, the visiting artist program that I coordinate, my travels, my family, my new dog, my interaction with others, my curatorial projects, my other residencies are my Crossing Boundaries residency. I figured that by making everything part of the residency some boundaries would inevitably be crossed. Even upon being given the opportunity to write this a few days ago I decided it too would be part of my residency. That every word I write here would be a product of it, proof that boundaries were crossed. In this case the boundary between you and I is being transgressed through the vehicle of this publication and my 1,000 words.

It is a simple notion and framework that I follow, but my hope is that in fulfilling them, deeper implications will emerge. This happened in my basement studio at the Arts Incubator. I decided that I would not bring materials into my studio but source things that were already on site. I did not find much down there and even what I found didn’t always interest me. Like the school desks that were tucked away, covered in dust and not being used. I was reluctant to use them but finally decided to bring them to my area and lean them against the wall with the desktop flipped up. Upon doing this I realized that the flipped desktop resembled a speaking bubble coming forth from the seat. I started to think what these objects would say if they could speak. I found some old announcement-board letters in the teens’ classroom adjacent to my studio and came up with a few phrases that I glued onto the lifted tabletops. These phrases were self referential of the state of the desks but simultaneously alluded to possible past interactions of student and teacher. 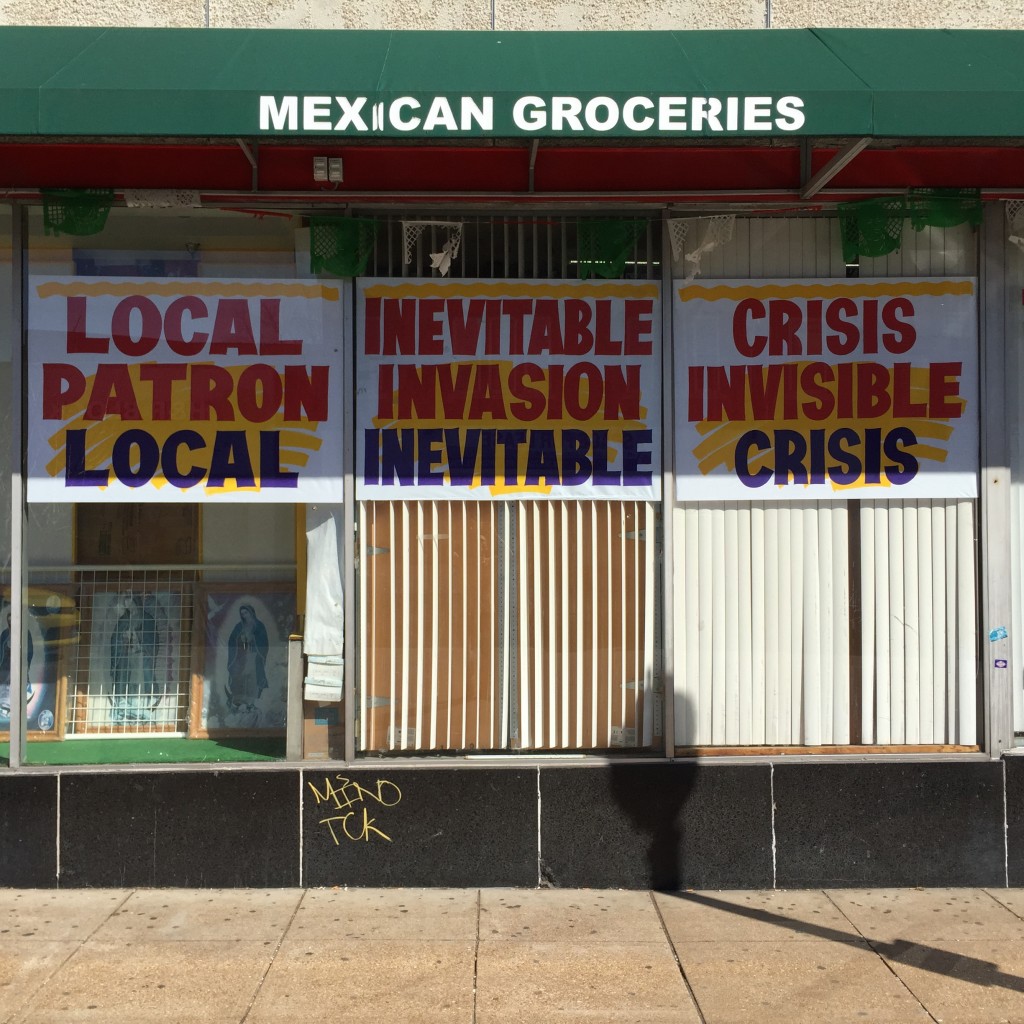 In my residency at the Luminary in St. Louis—within my Arts Incubator residency—I temporarily resided on Cherokee Street, a neighborhood that is in the midst of gentrification. One facet of my project there was to create hand-painted signs for the windows of a Mexican grocery store. I wanted these signs to speak to as many people as possible in the neighborhood so I decided to use perfect cognates, words that could be read in English and Spanish simultaneously. When designing the text for these signs, I began by going through a list of all the perfect cognates. I compiled my own list out of these words that I could relate to my experience on Cherokee Street. Using the words on my list, I came up with three-word phrases that more specifically related to the site and its current state. The three-word phrases were good but the way that they were arranged gave preference to an English read. After much thought I realized that if I only used two words and repeated one of them on either end, the read would be equal in both languages. The center word then acted as the bridge in the signs and the signs became the bridge for people of two languages and a neighborhood in transition. 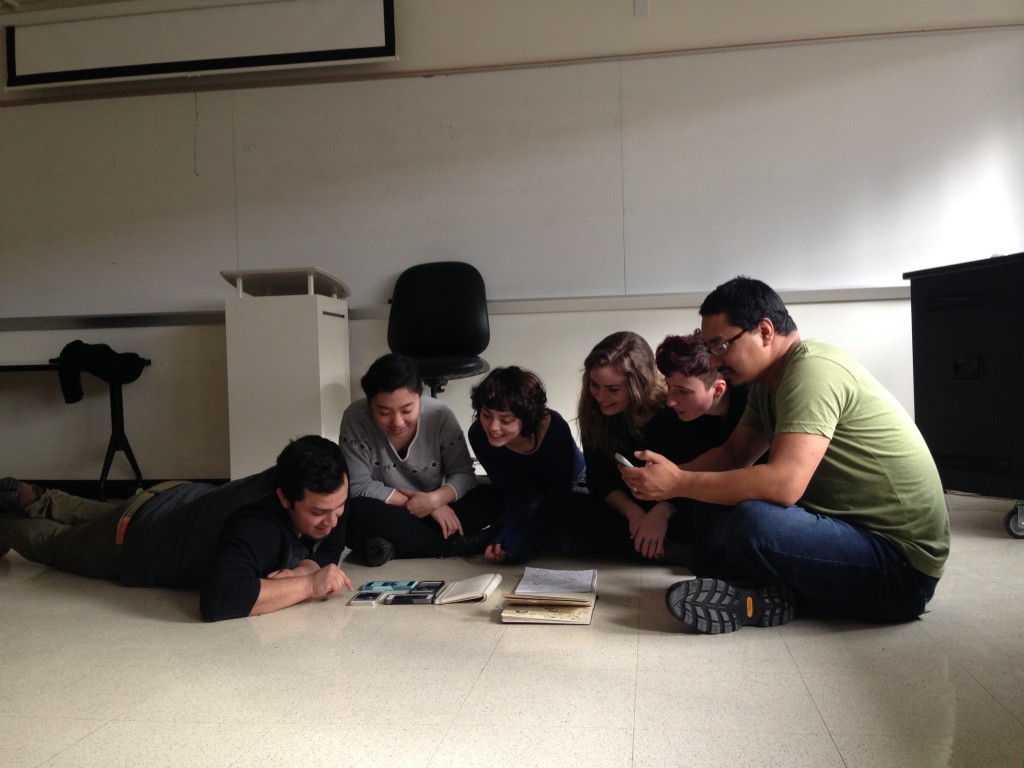 While on residency at the Arts Incubator, which is part of the University of Chicago, I am teaching a class that is made up of HWC, SAIC, Columbia College and UofC students. It is called Crossing Boundaries. The idea of the class is to take students out of their normal environment and into an immersive cross-institutional art experience. We travel to multiple schools, different neighborhoods, art spaces, artist studios, each other’s homes and make work amongst our journeys. I have been working with the HWC, SAIC and Columbia students since January and have begun to work with the UofC students while the former are on spring break. Next week the two counterparts of the class will be combined and I sense that this causes a mix of excitement and anxiety among students. That is OK because so much of the class has been built on the uncertainty of its outcome and where we will meet from week to week. 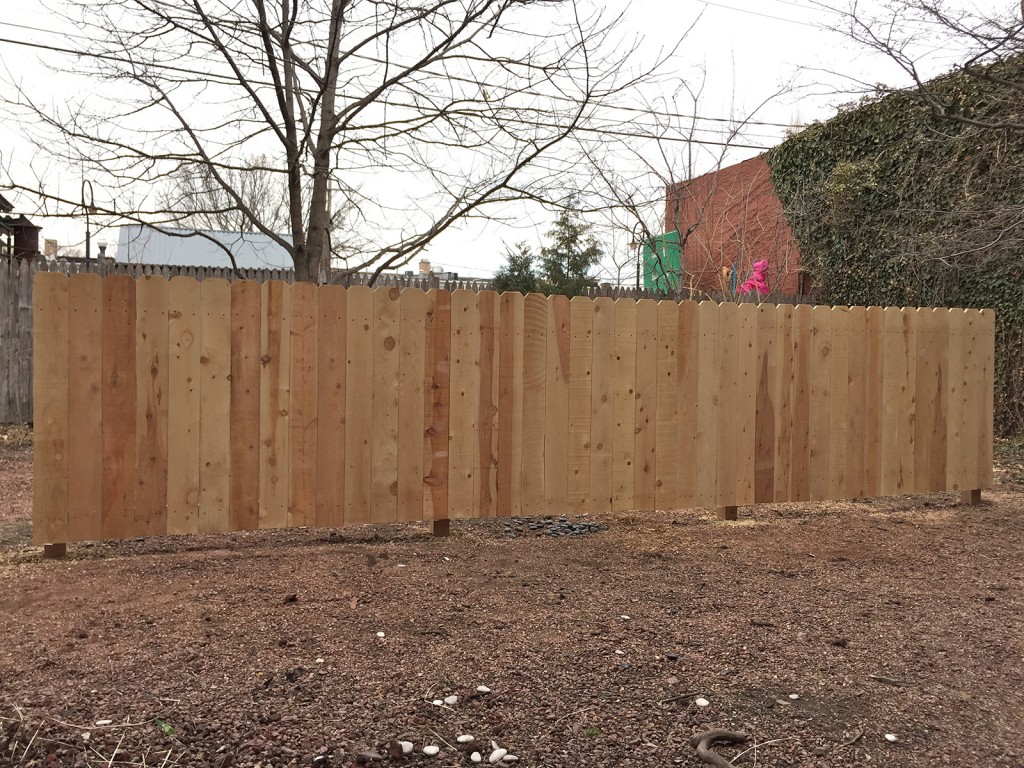 Currently I am installing an exhibition that I curated at the Riverside Arts Center. The show is made up of Latino/a artists from Chicago that use everyday material to produce works that have a monumental presence. It is titled “Material Normal Monumental.” The title is constructed of cognates because I wanted to indicate that the line of our existing in multiple cultures is blurry and sometimes invisible to the eye. As my contribution to the exhibition, I built a wooden fence with my daughter in the yard of the gallery with the sole purpose of allowing viewers to cross it. I do not know how it will be achieved but by the time you read this I will have figured it out as surely I have come to the end of this page using 1,000 words.