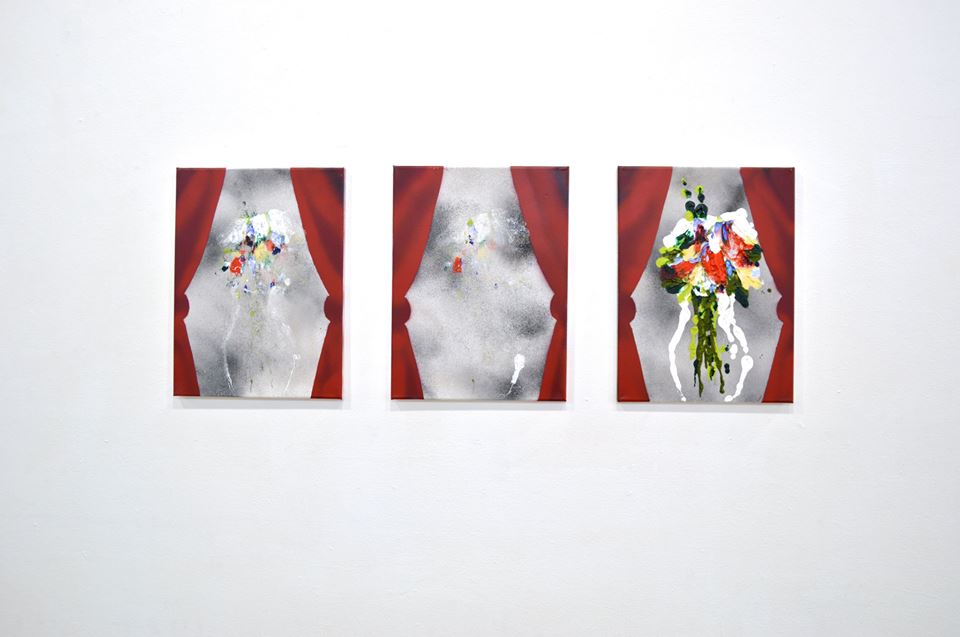 The works by Todd Kelly and Morgan Mandalay in “Happy Little” help bring the concept of the still life into the twenty-first century. Kelly’s pieces are the more straightforward of the two, with influences ranging from Dutch and French masters from seventeenth and eighteenth centuries to a visual representation of the gravitational pull of the planets. The Brooklyn-based artist uses oil and spray paint and collage to layer materials over one another, often creating expertly composed work that almost appears three-dimensional, as in “Theory of Gravity Still Life 13.” These complex pieces contain collaged shapes of abstract and representational elements, such as a Christmas tree or the artist’s initials. 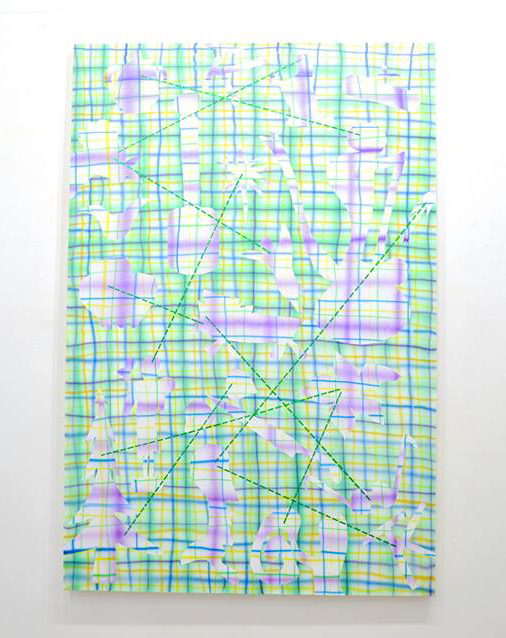 Mandalay also titles many pieces with a variation on the still life theme, such as the series “Still Life of Flowers and Red Curtains.” There are eight paintings from this series in the show, depicting a vase of flowers in varying degrees of completeness, always framed by the same red curtains. Made with oil and spray paint, these paintings are arresting in real life; the oil paint in some is layered so thick the flowers seem to be blooming off the canvas. Along a wall of windows sits “Still Life (with flowers),” a vase of the artist’s handmade flowers, framed by stiff red curtains, offering a more sculptural interpretation of the series’ idea.

Mandalay’s use of the still life often takes a performative and playful tone, perhaps as a result of the San Diego-based artist’s background in theater, as in the clever “Bed of Flowers.” Materials listed for the piece include cliché and handmade canvas flowers on a slow-leaking queen-size air mattress. “Bed of Flowers” also functions as a timed piece; the mattress will deflate by the close of the show.

The works by the artists manage to be both masterful and painterly, while bringing a fresh take to the well-worn still life. Through their use of materials, like Kelly’s airbrushing and bright acrylic color choices, to the obvious playfulness of Mandalay’s flower-strewn bed, the work allows the viewer multiple points of entrance. (Kerry Cardoza)