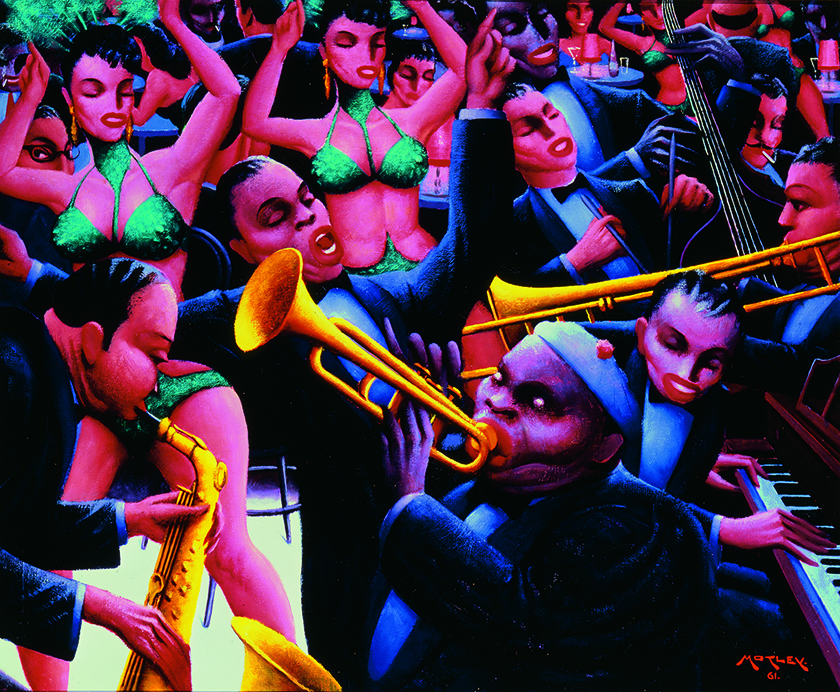 American life continues to be dominated by friction between its European and African diasporas. Possibly no American artist has been as immersed in that unfolding drama as Archibald Motley (1891-1981), among the first African Americans to address that theme with a thorough training in European pictorial space. As suggested by the thousand-mile-stare in his two self-portraits, wariness is the key to his response. He was too dark for the boardrooms of middle-class America, too well educated for the streets of Bronzeville, and too concerned with African-American identity for trendy galleries of modernist art. So he was probably uncomfortable in every public setting—except the dance halls in Jazz Age Harlem where urban sophisticates of all backgrounds mingled. His visualization of that world is ecstatic. It is also masterful, in both narrative and design, comparing well with the dance halls depicted by Renoir, Lautrec and Picasso, but with a greater emphasis on the congenial interaction between characters. 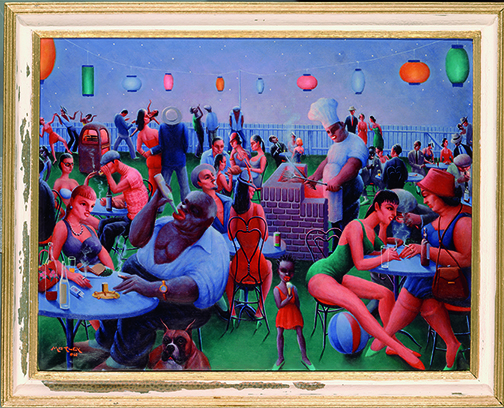 No less fascinating are the earlier portraits of his family, rendered to feel quite real and well loved. Within their formal settings and cultural artifacts, they work hard for respectability. Less real and more ambivalent are his depictions of street life. Mostly they appear to be celebrations of a lively community, but sometimes the exaggerated features resemble the racist Nazi propaganda from that era, while views of the nude performers in dressing rooms feel lurid and voyeuristic.

Overall, this retrospective—broader and deeper than the 1991 exhibit at the Historical Society (now the Chicago History Museum)—shows the development of a cartoonish style that’s progressively more about blunt narrative than naturalism, classical poise or painterly self-expression. He ventures into Surrealism when he travels to Mexico and depicts a world quite foreign to him. But otherwise, he’s on topic for the very real, problematic relationship between races, spending his last decade on one final work. Titled “The First One Hundred Years,” it marks the centennial of the Emancipation Proclamation. He left it unfinished, and it’s something of a frightful mess. But so is its subject matter. (Chris Miller)

Through August 31 at the Chicago Cultural Center, 78 East Washington