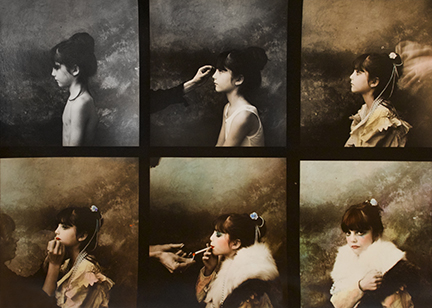 For the inaugural exhibition at his new photography gallery, Paul Berlanga has put together works of five leading European modernists: Lucien Clergue, György Kepes, Jan Saudek, Petra Skoupilová and Rutger ten Broeke, all in black and white, with the addition in Saudek’s case of subtle coloring. The “edge” referred to in the show’s title is decidedly surrealist, with the contributors using different strategies, approaches, and concepts to convey the visual strangeness, bordering and often falling into eeriness, that is surrealism’s hallmark.

The most intriguing and important work in the show is Saudek’s. Shooting in Czechoslovakia at the end of the Communist era, Saudek took to his basement, beneath the censors’ radar, where he staged erotic and fetishistic scenarios, and posed his models for theatrical portraits, creating a world exuding playful decadence that was at stark odds with the puritan morality purveyed by officialdom. Characteristic of Saudek’s approach is “Ilary Make Up,” 1983, a six-image photo-narrative that begins with a nude nymphet in profile in black and white, and then moves through her being groomed and dressed by an older woman, with color increasing successively, until she is all dolled up and has a cigarette lit for her. In the final image, her face is turned toward the camera and she has become a full-fledged vamp. On the border between sensuality and innocent child play, the sequence elicits a sense of odd indetermination, and—depending upon one’s moral proclivities—a smile or a frown. 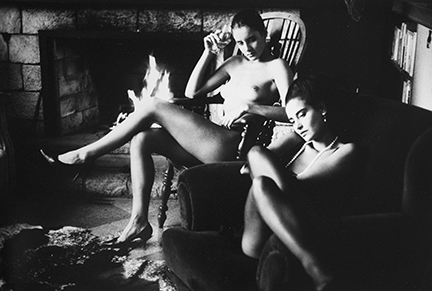 Another Czech scenario photographer from Saudek’s generation, who has not been seen in Chicago before, Skoupilová structures her erotic images by placing the nude young women grouped in them in sculptural configurations that set up a provocative tension between sensuality and rigidity. In a seductive image from 2002, two nude young women lounge in front of a flaming fireplace, one of them scrutinizing the other, who submits to the searching gaze with her head on her shoulder. It is all so flowing, but for their sharply crossed legs that form a barrier between their dreamlike relation and the rest of the world. (Michael Weinstein)

Through May 30 at Berlanga Fine Art, 230 West Superior