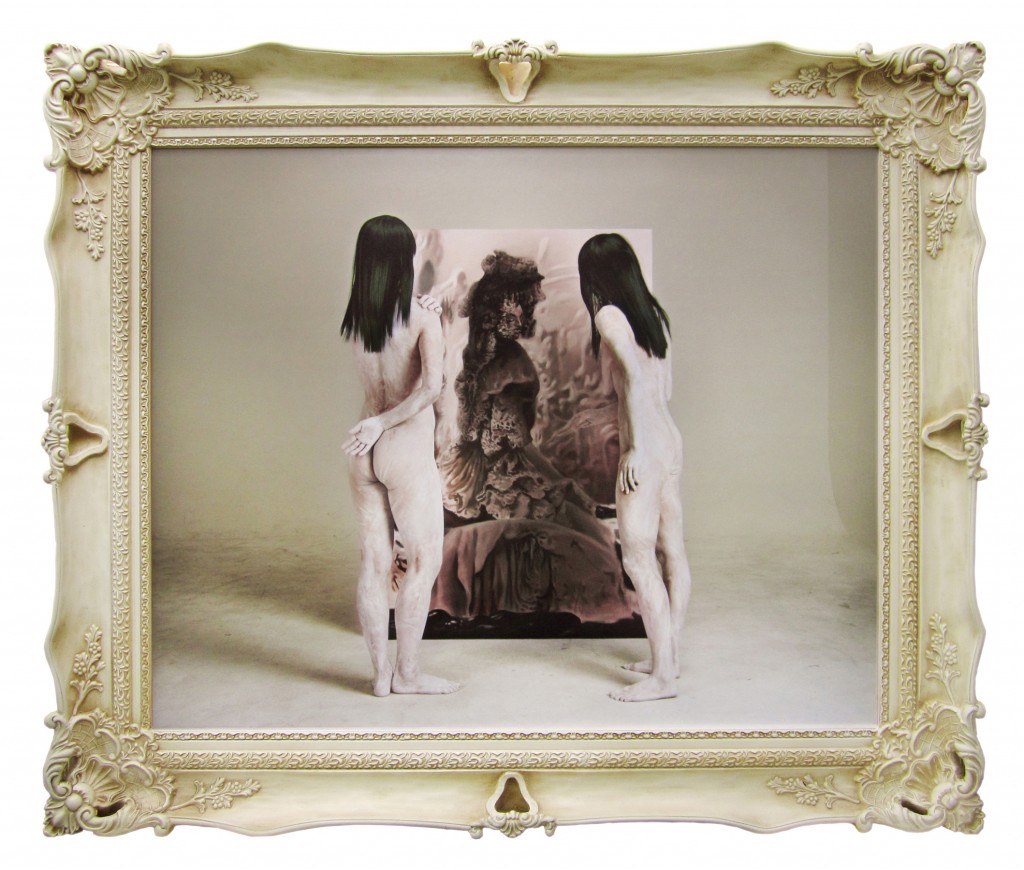 The subterranean “Blue Room Lounge” at Japonais is a dark, sleek, somewhat claustrophobic space, currently host to three photographs by Rim Lee, a project organized by Kasia Kay Gallery that shares in the space’s qualities. Each one centers on a pair of nude and nubile female torsos that sharply defines a sexual, but not a personal, identity. Like celebrants at a masked ball, their faces are not shown, so the various hips and breasts belong to a world of psychosexual fantasy more than to any particular person. In one image, the faces are turned away, staring at the artist’s own painting which depicts a disembodied, non-gendered human face emerging above a flaccid pillar. It’s an obvious reference to the work of Max Ernst, after whom this work, and the entire exhibition, has been named. But it may also represent an awkward self identity that hasn’t yet caught up with the sexual maturity of the figures staring at it. Indeed, there is something girlish about all three photographs that seem to rest between the comfortable, well-ordered world of a happy childhood—and the confusing, sometimes dangerous, world of adults. In the other two images, giant bird masks cover the heads of the two attractive nudes. Covered with fluffy down instead of feathers, the birds are more like oversized chicks than adults who have already flown the nest.

The passage into adulthood is the greatest drama of every human life and Rim Lee has given it the mystery that it deserves. But unlike her abstract paintings, which are not on view here, these photographic storyboards do not feel self-sufficient. Will an adult personality ever be built? Will the artist ever move beyond her fascination with the wounded, PTSD world of Max Ernst? With the many manipulations in costume, set and choreography, these pieces come close to movie making and narrative drawing with skillful manipulation of dramatically monochromatic pictorial space. But all this artfulness, executed by the short, strong hands self-portrayed in every image, seems to aim at nothing higher than celebrating itself. (Chris Miller)