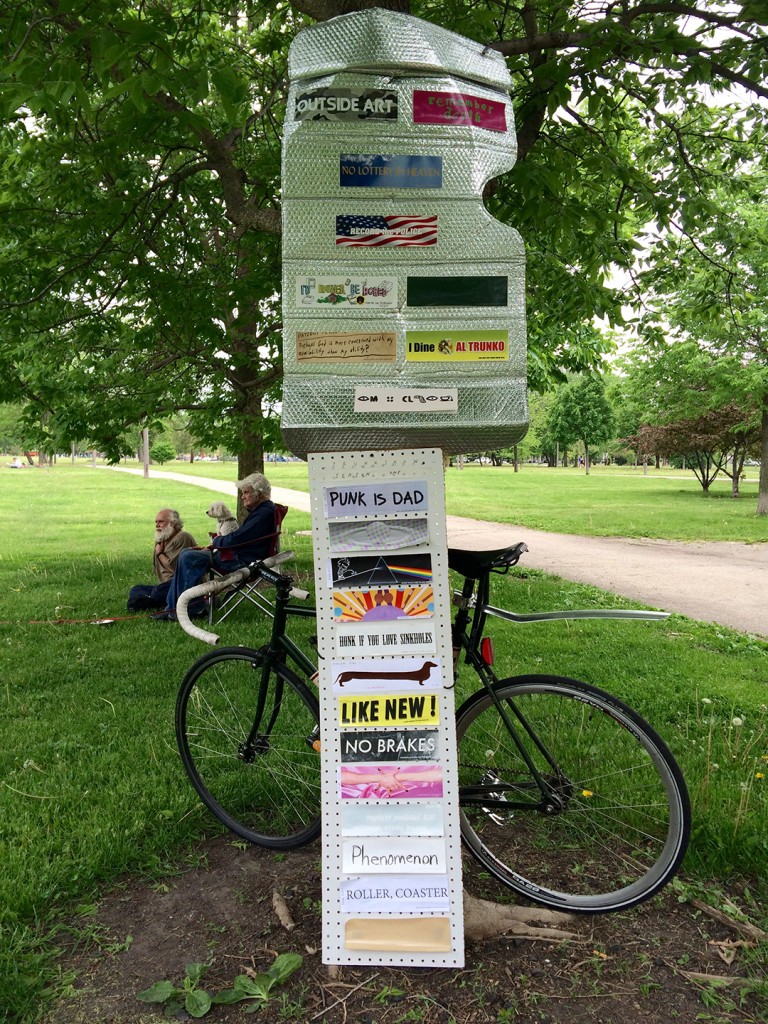 On a recent sunny Sunday afternoon, a few dozen people gathered near the boathouse in Humboldt Park for an opening of new work by Lilli Carré. The work was a bumper sticker reading “I’m for clarity” spelled out in Rebus, pictograms that spell words phonetically, for the mobile gallery Trunk Show. The puzzles-and-games theme of Carré’s project extended to the snacks on hand, “signifier” pasta salad, and the activities, lawn games.

Trunk Show, run by Jesse Malmed and Raven Falquez Munsell, unveils a new sticker each month on the couple’s well-worn 1999 Ford Taurus. They started in 2013, motivated by interests in alternative exhibition spaces and in offering the works as a subscription series. The stickers sell a la carte for five dollars, or collectors can subscribe and receive the whole season’s work.

Subscriptions help make the project self-sustaining and appeal to patrons collecting the art as a multiple. This season each sticker has a print run of 100. Munsell says the production model was not meant to create exclusivity. “It wasn’t about a sense of false scarcity,” she says, but about keeping the work affordable.

Collectors approach the project in varied ways. Jason Lazarus, who designed January’s “Record the Police” sticker, layers each new piece on top of the previous one on his car. Most people, Munsell says, are more precious with them. Some collectors have asked for a plastic sleeve, to slide the stickers in and still preserve them as objects. 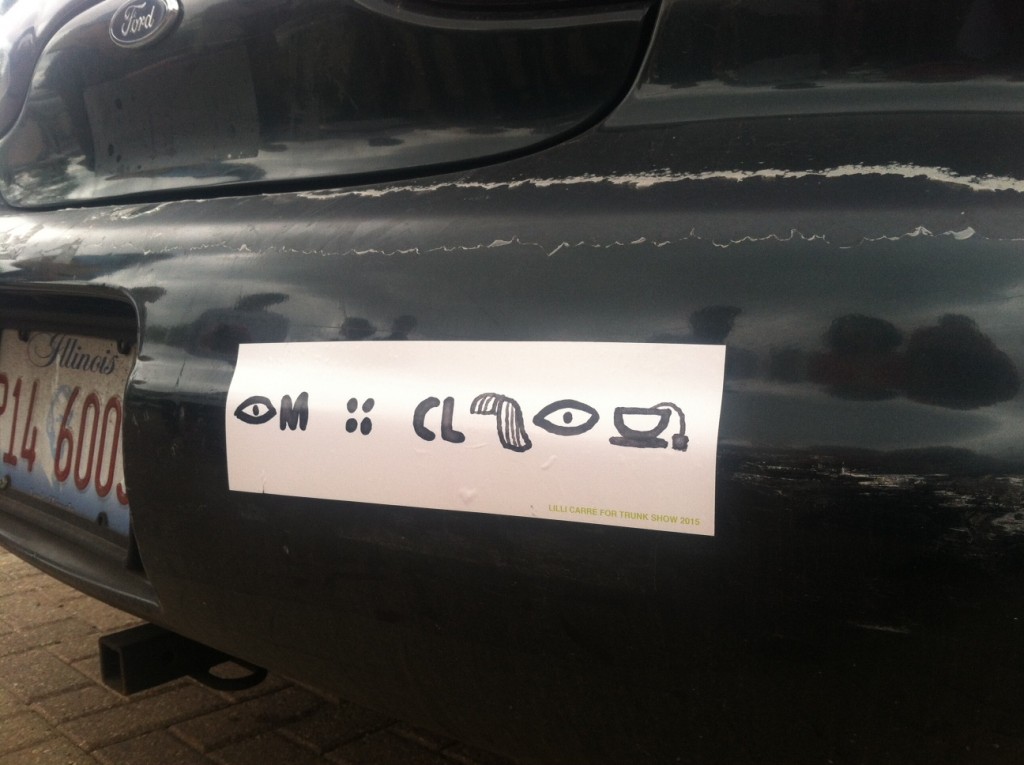 Artists have been playing with bumper stickers as a medium since the late 1980s. Marlene McCarty, inspired by graphic-design-oriented artists like Jenny Holzer and Barbara Kruger, produced stickers with time-period appropriate messages like “HONK If Your Body’s Not Yours.” Bumper stickers are a concise way of communicating to the world; it’s easy to see their attraction for artists. As drivers are forced to read them and respond, artists can use them as functional props to convey meaning, or to comment on their mass appeal.

June’s artist Edie Fake says he likes the low-stress format. “People can collect them like a completist and like them and treasure them,” he says. “People can also treasure them by using them.” Fake’s sticker unveiling will be concurrent with his solo show opening June 19 at Western Exhibitions. His work involves things hidden in patterns and the power of combined forces; the stickers will spell out a message when placed together.

Many artists consider the secondary audience, people on the road, when coming up with ideas. Carré thought about the bold statements drivers often make with bumper stickers. “You really have this strange captive audience,” she says of people stopped in traffic. “It was an interesting challenge to try to think of something that could be experienced in this brief interval and still ask to be stared at.”

The curatorial model also allows collectors to actively respond to each show. “If people really do put them on their cars it’s like the shows are expanding,” Munsell says. “Ideally they can be anywhere across the country.” (Kerry Cardoza)