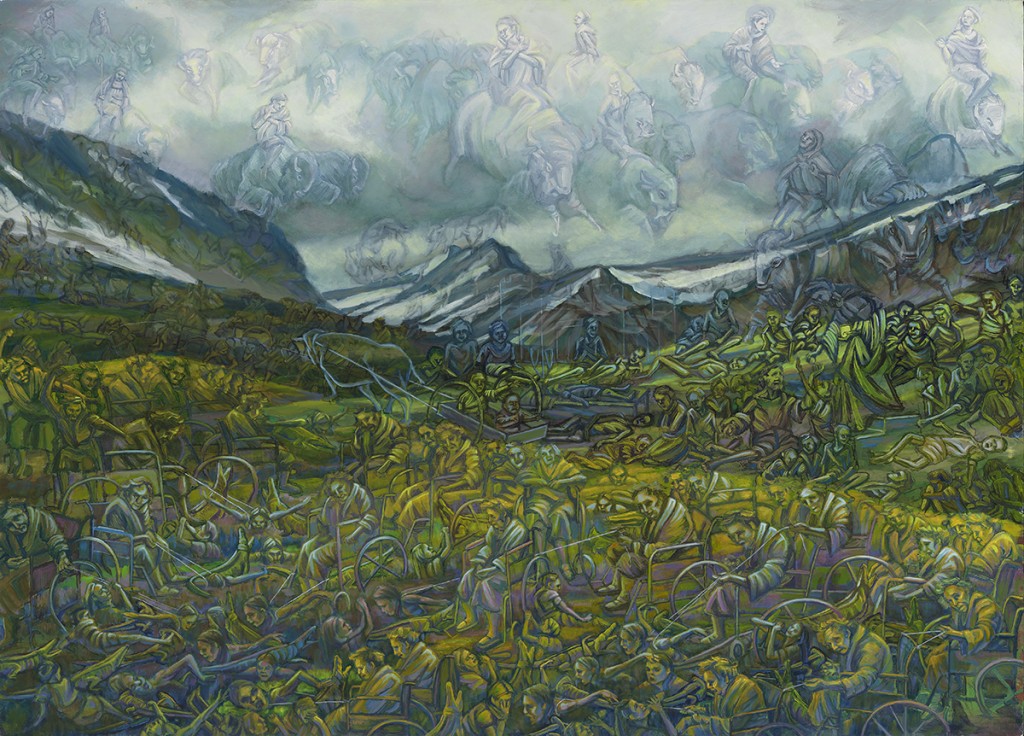 Mary Porterfield paints nice Western landscapes, or at least that’s how her paintings appear from a distance of twenty-five feet. Mountains in the background, dramatic clouds overhead, and a roaring river running through the middle: it’s all quite conventional, suitable for a hotel near a national park. However, when viewed closely, the sky, earth and water are filled with dozens of faint, ghost-like human figures that seem to inhabit a parallel universe.

Sometimes they are playfully cavorting in the water—but usually their activities appear metaphorical of a more desperate struggle. In one image, a large crowd of people in wheelchairs throws lariats to grasp beyond the reach of their confinements. With the occasional appearance of haloed saints and traditionally metaphorical animals (lions, bulls, eagles), that desperate struggle often seems spiritual in a Biblical kind of way. Such scenes share the sincere intensity of the illustrations made for religious screeds as they might depict some awesome, eschatological event like the Rapture. Certainly, no hedonistic aesthetic has directed this artist’s drawing of human bodies. They’re neither strong, sensual, elegant, vibrant, nor heroic, but are as stiff and awkward as statistics, living in a drab, dreary world that feels like the waiting room of a trauma center.

None of which would immediately prompt, at least for me, “a philosophical discussion regarding the struggle to live a compassionate life,” which is the artist’s stated intention. But still, these are memorable images, as they present such a fractured coexistence between the spacious natural world and the tormented inner life of humanity—especially in rural America where bucolic forests coexist with the catastrophic narratives of fundamentalist religion. And similar to our Walmart world of mass merchandising, what looks good from a distance is far less appealing when studied up close. This is America’s inner life, and it ain’t pretty. Is it more compassionate to exemplify such a condition, or raise us to a better one? That is the philosophical question with which this exhibition has left me—so perhaps the artist has fulfilled her intentions after all. (Chris Miller)