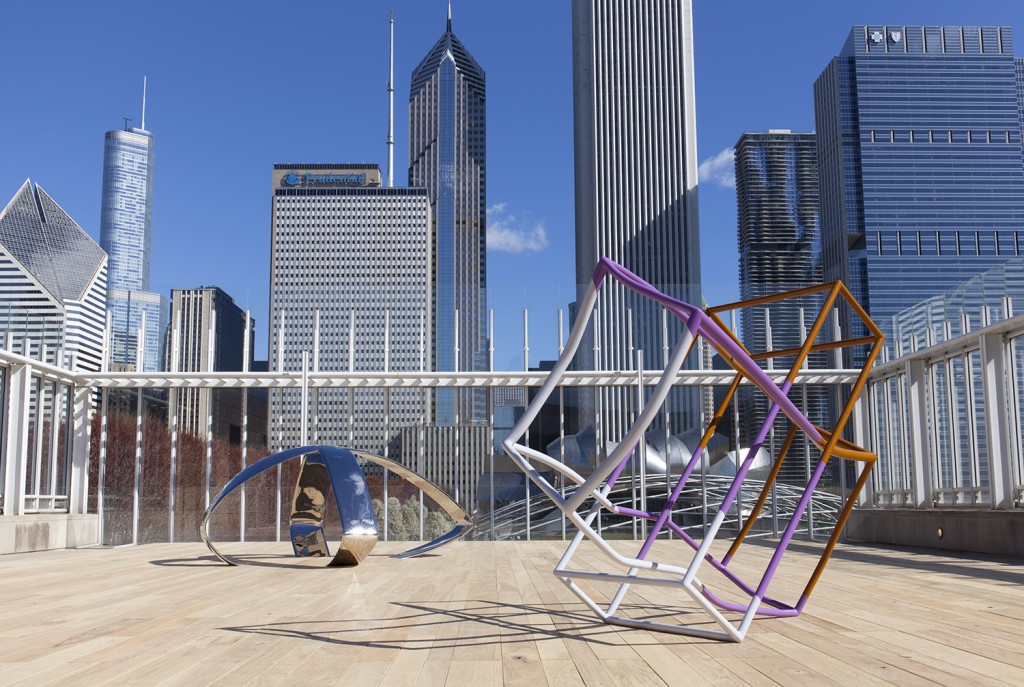 Installation view of Liz Larner, on the Bluhm Family Terrace, the Art Institute of Chicago

In Liz Larner’s current exhibition on the Art Institute’s Bluhm Terrace, two freestanding stainless steel sculptures have been placed at a diagonal to each other. While the generous amount of space between the works engenders but a faint conversation between them, the expansive wooden stage upon which they rest unites the pieces together as a pair. The urban lumber platform, constructed by Larner’s hands and held together by countless golden screws, is made from unflashy materials that would typically appear discreet—however, the large expanse of ash-wood boards fitted tightly together boldly contrast the terrace’s industrialized cityscape with a warm, simplistic rawness.

On the platform’s far corner rests “X,” a sculpture made from polished stainless steel so shiny it reflects its surroundings like a mirror. Crouching low to the ground on bended legs, the elliptical sculpture rests motionless atop four limbs that curve first outwards then sharply inwards, ending in thinly chiseled bases that delicately elevate the structure atop its wooden stage. Otherworldly in surface and shape, it hovers in a state of ever-landing, temporal weightlessness. Poised and motionless, the piece’s stance dares viewers to solve the problem behind its title, and quickly before it either falls to earth or flies to space.

Across the platform, colorful counterpart to “X” twists and turns its orange, purple and white limbs into a more playful game of problem solving. Where “X” is stoic and serious, “6” is lively and expressive. The leaning sculpture’s contouring lines link together into a graceful equation that viewers untangle with their eyes. Two intertwined rectangular shapes lean in opposite directions, one straight and symmetrical, the other imperfect and bowed—coming together, the shapes cast an undeniably cross-shaped shadow onto the ground.

The grade-school instruction “solve for X” initiates a process of discovery and disentangling, as behind each “X” hides a conclusion that can only be found by using surrounding numbers and information. Similarly, viewers of Larner’s sculptures must seek meaning by tapping into our familiarities and the surroundings within which we encounter the work. (Maria Girgenti)

Through September 27 at The Art Institute of Chicago Bluhm Family Terrace, 111 South Michigan.