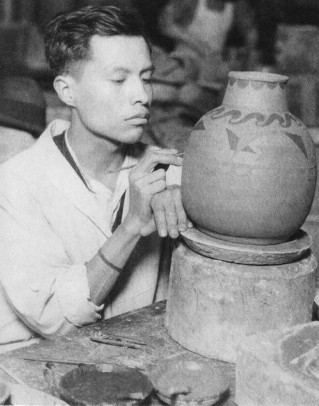 The National Endowment for the Arts (NEA) has awarded a $20,000 grant to the University of Illinois at Chicago (UIC) to create a Chicago-focused online collection of Latin American and Latino art, which will be the Chicago Latino Art Now! Virtual Gallery. The UIC-based Inter-University Program for Latino Research, an association of universities nationwide committed to increasing Latino scholarship, will support this project.

“The Chicago Latino Art Now! Virtual Gallery is a permanent digital space for art that will showcase a survey of Chicago art and visual culture since the 1930s,” says Olga Herrera, the principal project investigator, in an email interview with Newcity. For instance, artists closely associated with the Hull-House Kilns such as Jesús Torres, Miguel Juárez and José Ruiz will be featured on the gallery. Additional examples include Mario Castillo, Ray Patlan and Marcos Raya, among others linked with the 1970s mural movement.

Above all, this project aims to provide essential education and resources on Latino art to Chicago and the Midwest, available online through a digital art collection. “Although Latino and Latin American art in the last ten years have made significant strides,” Herrera explains in the press release, “the art production of the Midwest, and in particular Chicago, continue to be conspicuously absent in the U.S. art historical canons, major exhibitions, publications, classrooms and narratives.” That said, the Virtual Gallery will underpin Latin American and Latino art history, and acknowledge the “redefinition of art prompted by changing demographics,” as Herrera describes it to Newcity.

Both Herrera and Maria de los Angeles Torres, a project investigator, see this gallery “as an interactive educational resource,” the press release states. Although the virtual gallery is accessible to everyone, it is geared toward middle- and high-school students and teachers. Indeed, this project is collaborating with the Smithsonian Latino Center’s Latino Virtual Museum to create a “digital teacher’s toolkit,” which will include plans to engage with an artwork’s meaning, context and visual components, Herrera writes. The Smithsonian Latino Center also aims to bolster Latino presence, and supports initiatives such as online platforms. According to Herrera, the Chicago Latino Art Now! Virtual Gallery will be accessible through the Smithsonian Latino Virtual Museum.

The Chicago Latino Art Now! Virtual Gallery will debut in April 2016. This timing coincides with the inter-university program and the Latino Art Now! conference—a three-day event in Chicago. (Amy Haddad)