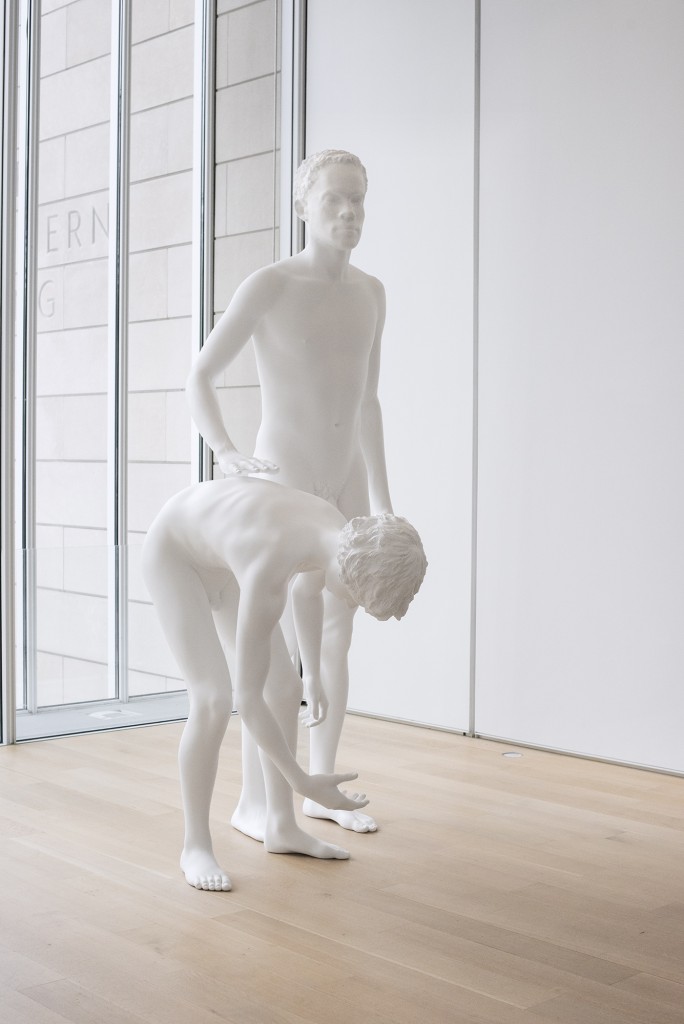 Charles Ray. “Huck and Jim,” 2014.
Installation view at the Art Institute of Chicago.

Charles Ray’s figurative sculptures sparsely populate the second floor of the Modern Wing in this major midcareer retrospective. Walls were removed to give the nineteen works plenty of breathing room. The pieces, cast in white and silver materials, create a cool, calming effect. Combined with the hushed atmosphere, examining the work feels like sneaking up on someone, as in “Sleeping Woman,” where a stainless-steel rendering of a homeless woman naps on a public bench. 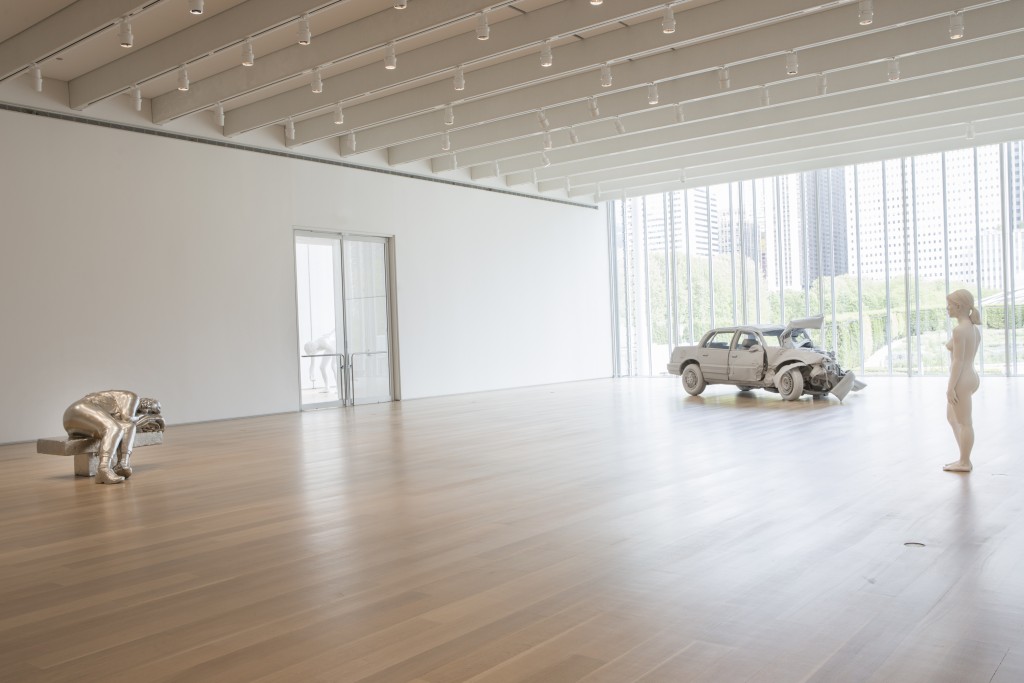 Installation view of “Charles Ray: Sculpture, 1997-2014” at the Art Institute of Chicago

The show’s crowning piece, “Huck and Jim,” Twain’s infamous duo, scaled 150 percent, towers over viewers. Displayed publicly here for the first time, it has already created controversy for the Chicago-born artist. The characters are rendered nude, as described in a passage before bed, and Jim reaches out to pat Huck’s back as he bends to scoop frog roe from the river. Originally slated for installation in front of the new Whitney Museum, they eventually declined to stave off potential conflict. The combination of Jim, a fully nude African-American man, shown in close relation to a naked white teenager, has proven a challenge for curators. The work is beautiful, and loaded with meaning, but the Art Institute has it in a cramped space outside the main rooms, making it difficult to appreciate.

“Unpainted Sculpture,” a fiberglass re-creation of a totaled 1991 Pontiac Grand Am, is another standout work; it resembles a cross between a showroom car and an action movie prop. Ray and his assistants spent three years dissecting the car, making molds of every piece, and reassembling them. The level of detail is astonishing, down to the “Jesus is Lord” trunk emblem. Ray felt the car had the presence of the dead driver; the uniform light gray color helps bring a still, ghostly feeling to the shrine-like piece. The strongest works also capture a psychological mood—the relationship of Huck and Jim, the site of a tragic death. Ray falls short in pieces that seem like exercises on the way to deeper ideas, like “Tractor”—a silver carcass of farm equipment, or the lifeless “Horse and Rider,” installed in the museum’s south garden. (Kerry Cardoza)

Through October 4 at the Art Institute of Chicago, 111 South Michigan.