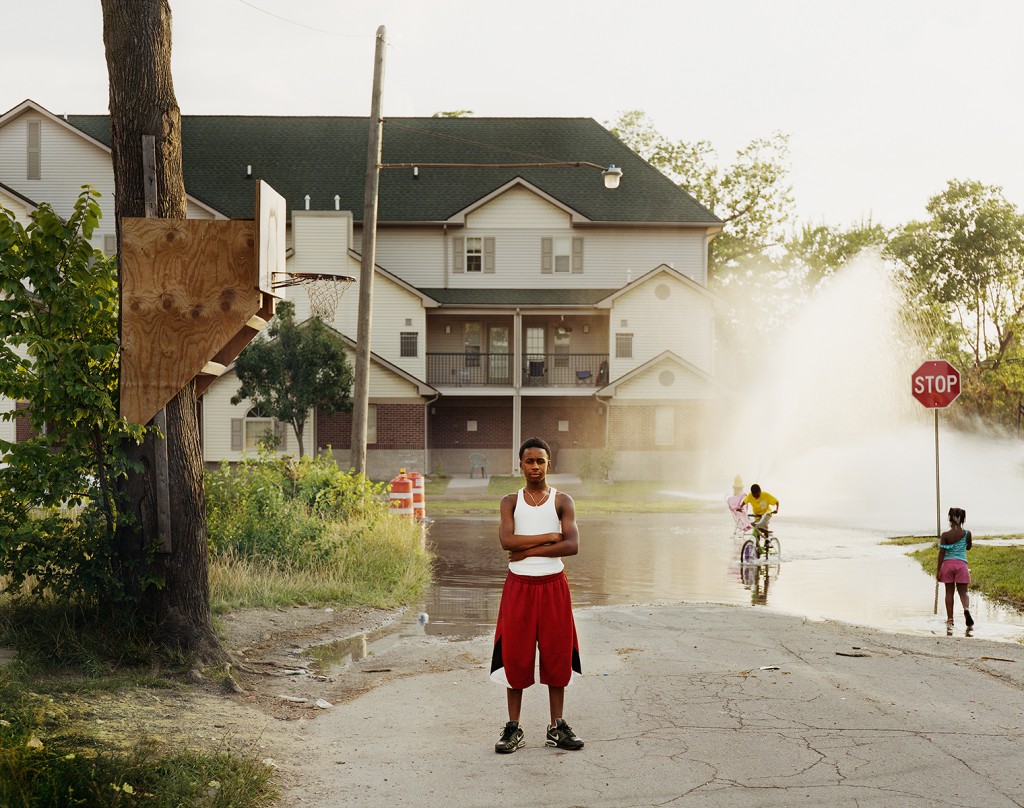 It’s all about social class in Dan Farnum’s color street portraits of mainly youth in his hometown of Saginaw, Michigan and the outskirts of Detroit. Farnum is middle class and in his thirties, an early Millennial on the cusp between X and Y; and his subjects, white and black, come from the lower rungs of the economic ladder, though not abjectly poor. When he was young, Farnum heard and saw all the stories about tough and gritty Saginaw, a victim of deindustrialization, but he didn’t experience it directly. Now he is drawn to that site to come closer to the life that had been mediated to him so that he can connect with it more intimately and to test the sensibility of “prestige from below.”

As is the case for most of the middle-class white-male photographers who try to fill a need for what they believe is a more authentic reality, Farnum is an appreciative outsider. He does not attempt to “dignify” his subjects for sentimental respectable sensibilities, nor does he romanticize them as noble or ignoble savages; he takes them as they are willing to have him take them, meeting them on his walks and having them agree to pose for him informally in front of his tripod-mounted view camera.

In the most representative and effective of Farnum’s images, a young African-American man in a truck driver’s undershirt and baggy red shorts stands in the middle of a paved lane, standing straight with arms folded across his chest at a long enough distance from the camera to project a powerful presence, but not individualized. The same holds true for all of Farnum’s shots of strong young men, all of whom are taken at inaccessible removes. That is not the case for his images of young women and younger males whom he represents through close-up headshots. He was able to get close to those subjects, although, even then, he does not seem to have established a personal connection. Farnum shows how difficult it is to cross over the boundaries of class. Having nothing to impose on his subjects, Farnum is still unable to make himself one of them. (Michael Weinstein)