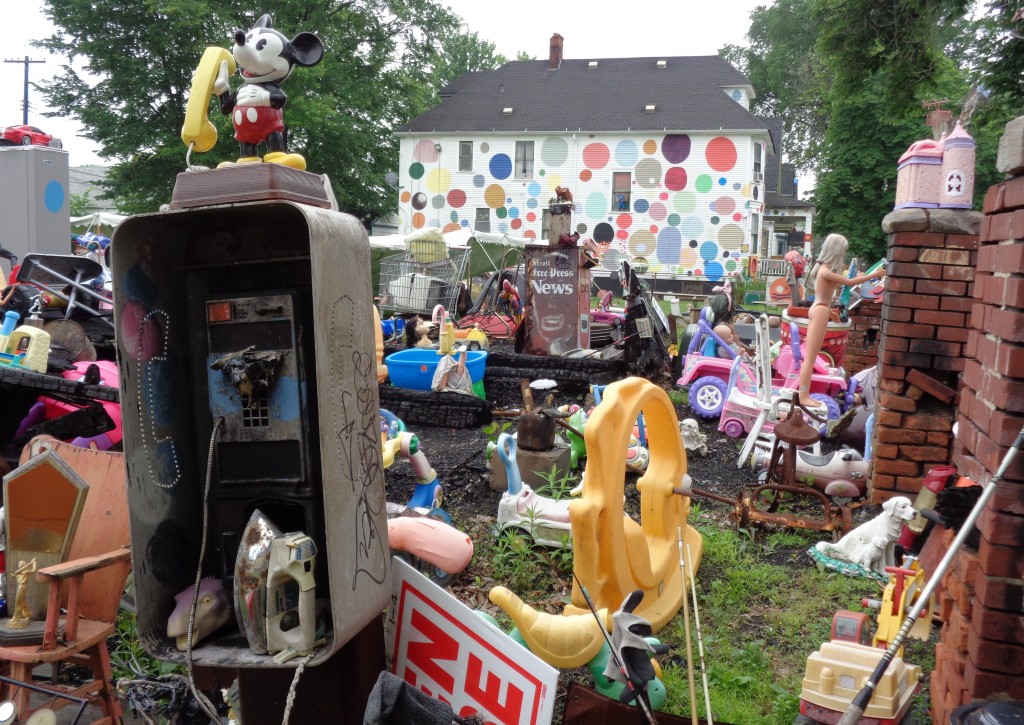 When you first pull up to the open-air art installation on Heidelberg Street in East Detroit, you’re struck by the remnants of houses that have recently been set afire by arsonists. Twelve blazes have gutted six installations in the last two years. The devastation and loss are felt at once, never absent throughout the exhibit, and serve as commentary on the plight of Detroit’s inner city. But Tyree Guyton and his volunteers continue to clear the ash and debris, create new works, and transform the space into one that persists in provoking thought, inciting imagination, and drawing in people from all over the country and world.

The two-block radius of the Heidelberg Project is populated with compositions of discarded objects: old shoes, dolls, defunct pay phones, stuffed animals, toy cars, umbrellas, TVs and tires. A sooty-faced Tweety Bird lies fallen on its side in a cage. A blonde doll rides a toy horse atop a pile of worn shoes. A herd of diverse plush animals pack into a polka-dotted sailing vessel with the words “Noah’s Ark” painted across its side. A ceramic pig, painted red in parts, stares out from a vintage stove with chair legs for arms, clothed with gloves, pointing in different directions. A two-story tree, which looks like it has survived a fire, is draped entirely in stuffed animals, dolls and shoes, and crowned with painted shopping carts. Salvaged and rearranged, these juxtapositions of objects evoke a range of themes: diversity, salvation, struggle, rebirth. 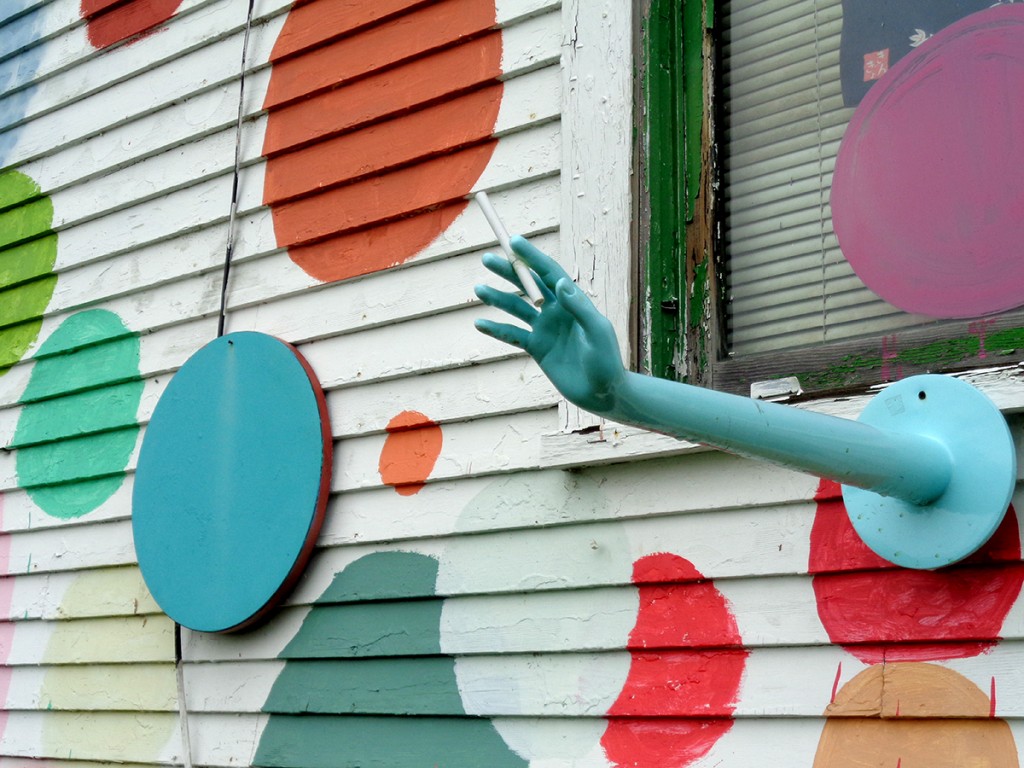 Only a few houses on the premises remain standing and only a couple appear functional. Multicolored arrows and numbers mark one of the houses; it’s used as an office and art gallery. Another house, formerly named the “Dotty Wotty House,” now the “New White House” is polka-dotted with various colors. A toy Superman bounds from a second-floor window of the house, a mannequin arm and hand with a cigarette between its fingers stylishly but monstrously protrudes from the house, and a mirror makes the viewer part of the veneer.

The project hosts a range of educational programs, especially for Detroit’s next generation of young people. While there, I witnessed a little boy present Guyton with a book he wrote and illustrated about the project, including its fires, and its rebuilding thereafter. He’s been a regular visitor to the Heidelberg Project since he was very young. I also observed a car full of parents and their youngsters disembark the vehicle and donate materials for future installations. They each individually bestowed Guyton with pieces of “magical trash,” and beamed when Guyton placed their gifts into the tableau. 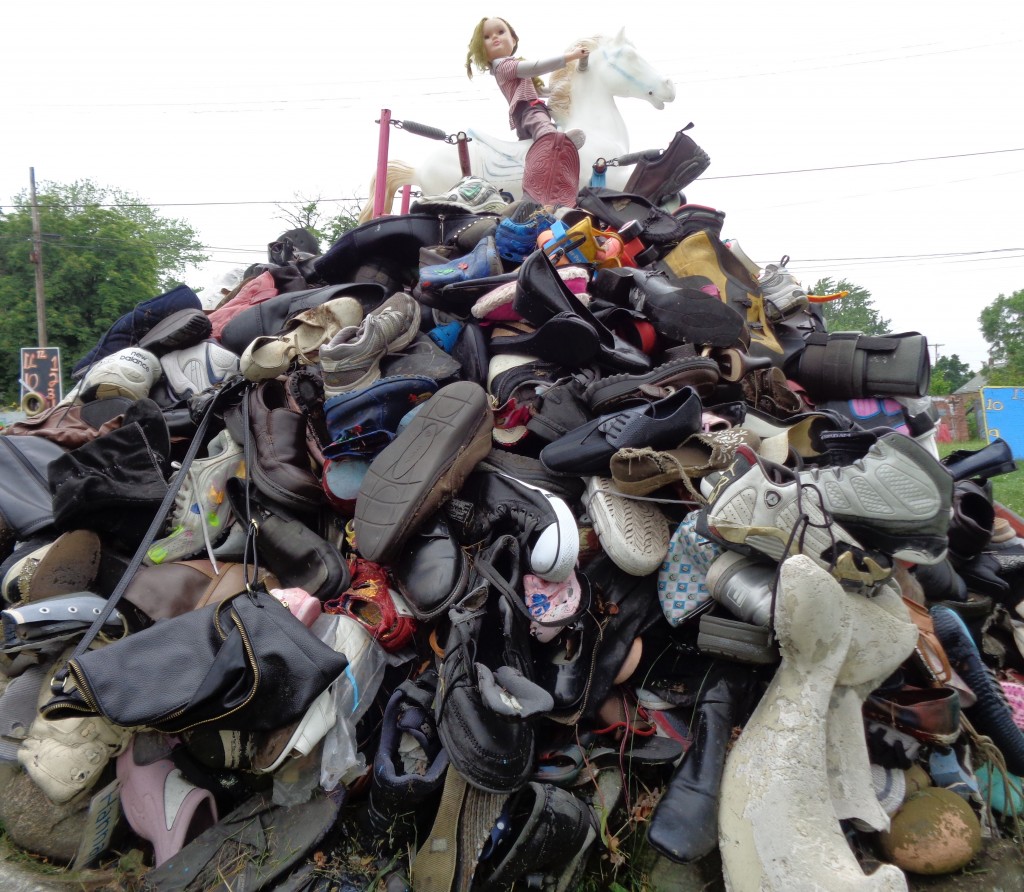 Whether it’s the project’s general mission to “improve the lives of people and neighborhoods through art,” its belief that “a community can redevelop and sustain itself, from the inside out, by embracing its diverse cultures and artistic attributes as the essential building blocks for a fulfilling and economically viable way of life,” its perseverance in the face of adversity, or its similitude to Detroit’s moment of transformation, over 275,000 people visit annually from all over the country and from more than 120 foreign countries. It’s the third most visited tourist site in Motor City. That said, arrive early. (Amy Danzer)

For more information about the Heidelberg Project, visit heidelberg.org