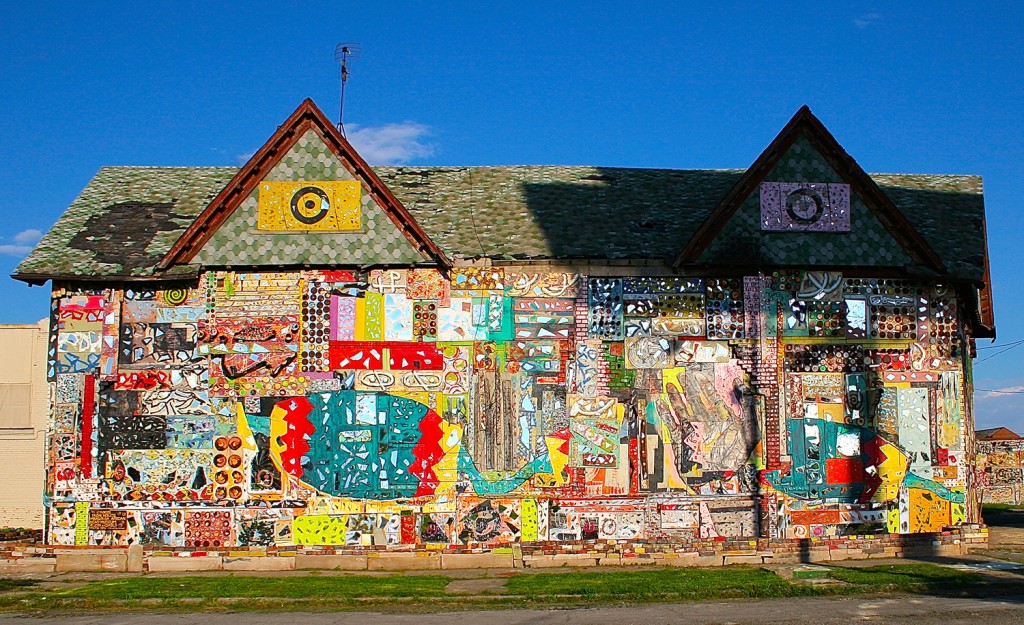 The twenty-first century has brought with it the re-emergence of contemporary conceptual artists engaged with penumbral zones. These artists are interested in site, positing new ideas for usage of once-inhabited homes and urban spaces. Whether the middle of the desert or the center of a blighted neighborhood, these sites exist on the theoretical—albeit times physical—margins of society. Artistic engagement with these interstitial spaces is on a material level, with art and architecture converging to create radical and experimental approaches to living. Positing ideas for architecture, technology, space and the body’s relation to it, artists are projecting utopic ideals for the future of the quotidian urban environment. What emerges from this are hybrid works of art and cultural production.

Many of the artists working within the City of Detroit are responding to the strengths and challenges of decades-old policy-making; working among and within immense expanses of land to develop site-specific and site-responsive projects. The state of Michigan, like much of the Midwest, was developed by federal policy-making initiatives to encourage settlement of lands that existed outside of the thirteen original states. The Homestead Act of 1862 was a policy that supported individuals who were interested in land ownership, by providing initiatives for the development of federally owned property. The United States government created this system to encourage homesteaders to seek out public land, and inhabit and cultivate it for a set amount of time. Once the homesteaders proved that they met the aforementioned requirements, ownership of the land was transferred into their hands.

When talking about Detroit in the present, it is necessary to consider the past 150 years of land use policy, housing and other municipal ordinances that made it possible for the city to be shaped into its current form. Detroit is a hub-and-spoke city, with present-day Campus Martius acting as the point of origin, and major roads, such as Woodward Avenue, Grand River Avenue, Jefferson Avenue and Michigan Avenue radiating from its center. This pattern of development will serve as the foundation for this essay on the city and its arts practitioners—both the new wave and the old guard. Taking the form of Detroit’s development is an opportunity to traverse the distance between four entirely different, yet connected, projects—highlighting the rich interdisciplinary approaches taken by these leaders in the city’s arts and cultural rebirth. 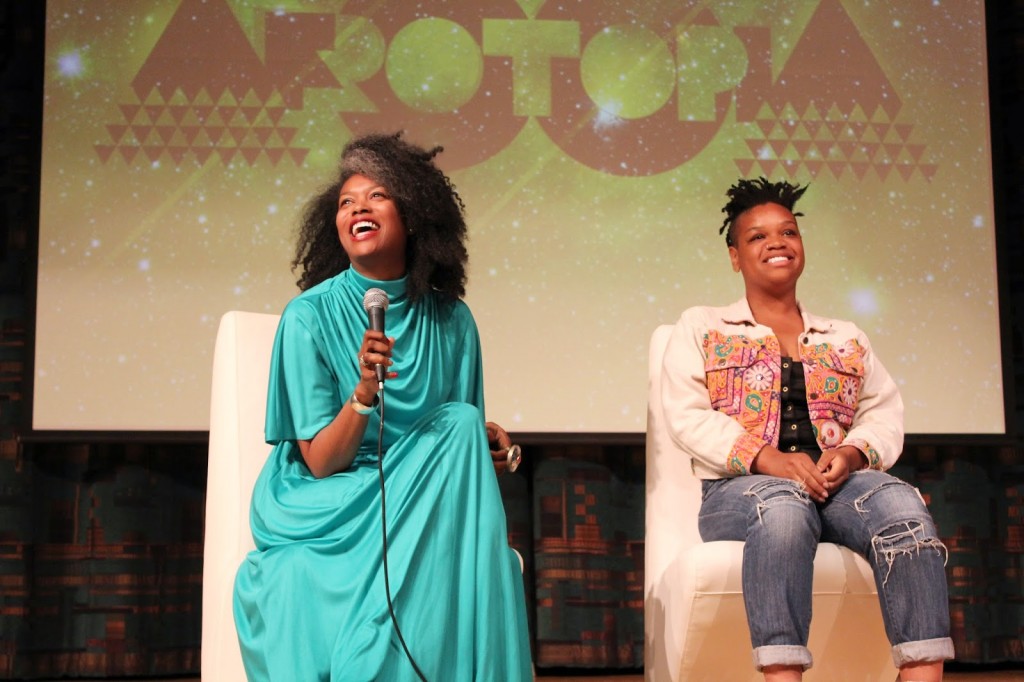 Here, there, and everywhere: AFROTOPIA

The overarching trope of otherworldliness that spreads across the aforementioned projects is what AFROTOPIA creator Ingrid LaFleur described in her TedxDetroit talk as “radical notions of utopia.” To LaFleur, all Detroiters are superheroes, imbued with otherworldly powers that they use to realize their dreams everyday. LaFleur is an artist, curator, teacher and cultural producer who recently relocated to her hometown of Detroit to be a part of the arts and cultural rebirth. Since dropping down into the cultural fabric of the city, she has been active in organizing salons in private homes, teaching students, making work, giving lectures, participating in exhibitions and organizing AFROTOPIA. 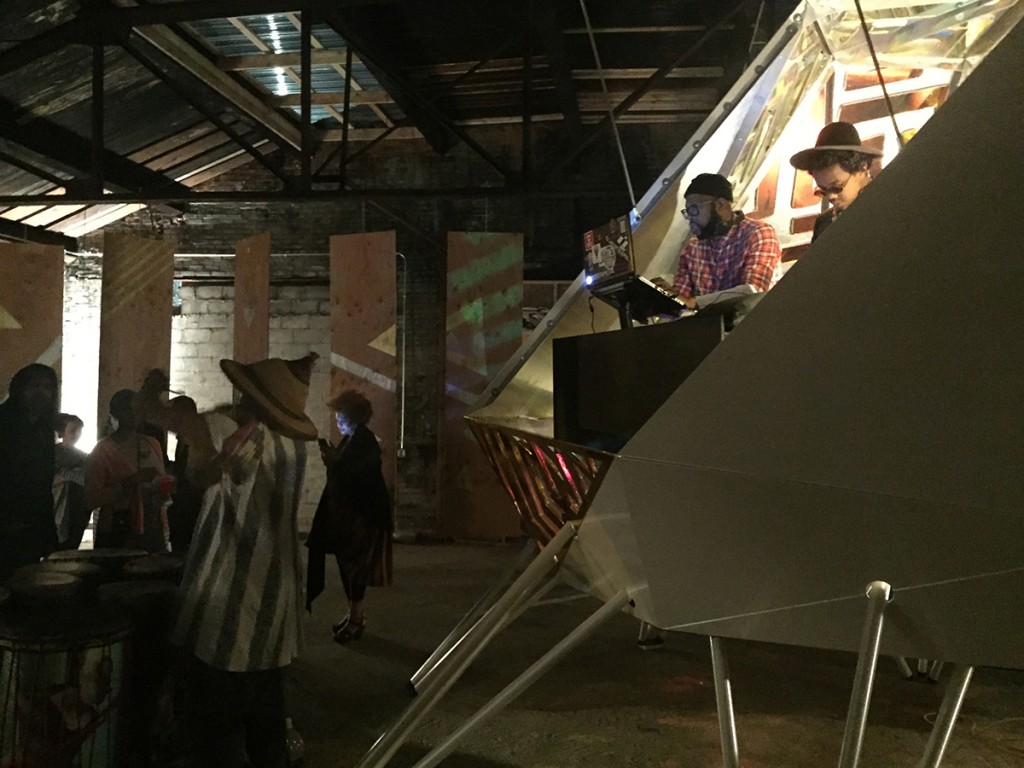 Collapse is a recurrent motif throughout LaFleur’s ever evolving AFROTOPIA, which is apparent down to the ontology of the word (created through LaFleur’s combination of Detroit and Afrofuturism). It assumes a non-linear position on time, existing simultaneously as an idea, place and project living through different dimensions, universes and realities. Influenced by speculative modalities including science fiction, fantasy, magical realism and non-western cosmology, LaFleur has realized multiple iterations of AFROTOPIA, including a three-day film program in May 2015 that focused on Afrofuturist filmmakers, produced in partnership with the Charles H. Wright Museum of African American History. Upcoming projects include Sigi Fest, a performance festival that celebrates the heliacal rise of the star Sirius, or Sigi Tolo. The festival will be housed at the House Opera: Opera House, a redevelopment project focused on spatial political activism, created by V. Mitch McEwen, architect, urban planner, and member of the artist collective HOWDOYOUSAYYAMINAFRICAN?. McEwen’s House Opera initiative is located in the Southwest neighborhood of Detroit, and the programming is being developed in collaboration with other local artists and collaborators, including Complex Movements.

Ingrid LaFleur can be found online at ingridlafleur.com or afrotopiaisnow.com. For an expanded interview, please see here. 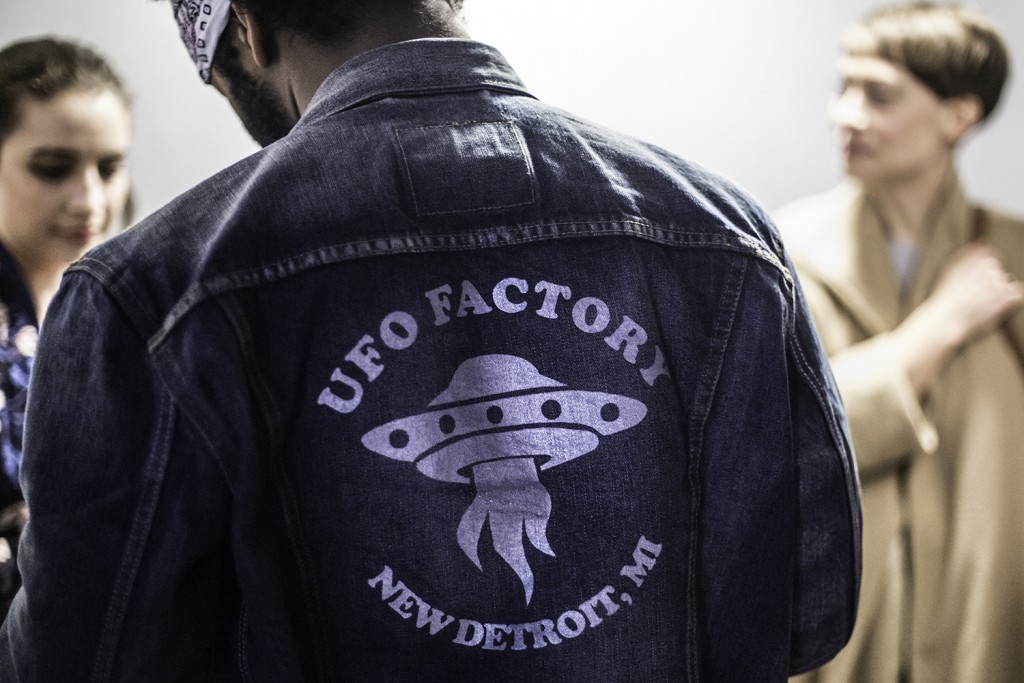 A jacket in the crowd promotes UFO Factory and a new conception of Detroit/Photo: Monica McGivern

Virginia Benson, a native Detroiter, started Party Store Productions in 2014 in response to a desire to expand the programmatic arc of her day job as the talent buyer at the Majestic Theater. After a year in her former position, Benson found herself more invested in the smaller shows she was producing. The combination of this interest and the revenue stream (the smaller shows were not the money makers that the bigger venue was looking for) inspired Benson to quit her job and start Party Store Productions, so that she could book the talent that she was invested in at the smaller venues that could support them.

Around the same time, the group that started UFO Factory was finishing renovations on the building’s current location across the street from the old Tiger Stadium. UFO Factory, developed out of an independent art space in Eastern Market, has had multiple iterations, including participation in 2008’s “Considering Detroit,” a group exhibition at MOCAD that included an installation created by the art collective TIME STEREO, consisting of a cardboard replica of the original UFO Factory location, a live music program and an exhibition within an exhibition. In the current location, UFO Factory hosts rotating visual art exhibitions, performances, events, dance parties and shows. 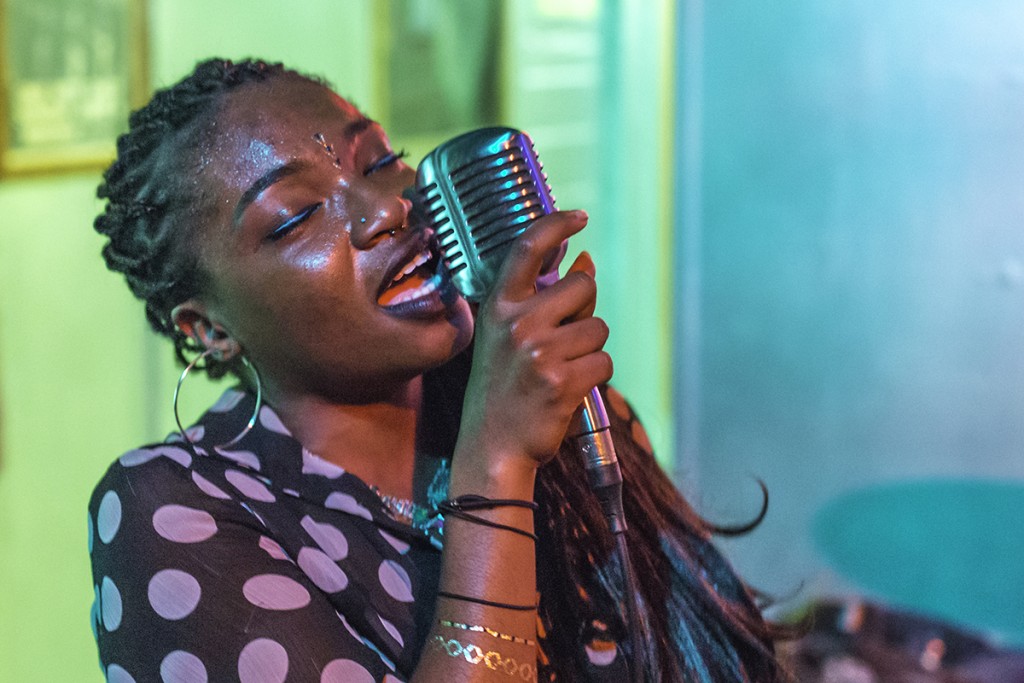 Now at the end of her first year working independently, Party Store Productions has developed into an opportunity for Benson to book music acts that she is passionate about at various smaller venues in the city. Benson collaborates with UFO to book their national and local music-based shows, where the venue’s uniqueness allows for more experimental programming. “The owner is supportive and willing to trust my taste which is awesome,” stated Benson in a recent email interview. “The building and the name naturally lead to more psych/cold wave/minimal synth projects than I had been doing prior to UFO. There’s a grittiness and realness that comes from having to figure out how to get things done [in Detroit] with limited resources. The community of artists is incredibly supportive of each other and noncompetitive.”

UFO Factory is located at 2110 Trumbull Street, Detroit, and online at ufofactory.com. Party Store Productions is online at facebook.com/partystoreproductions 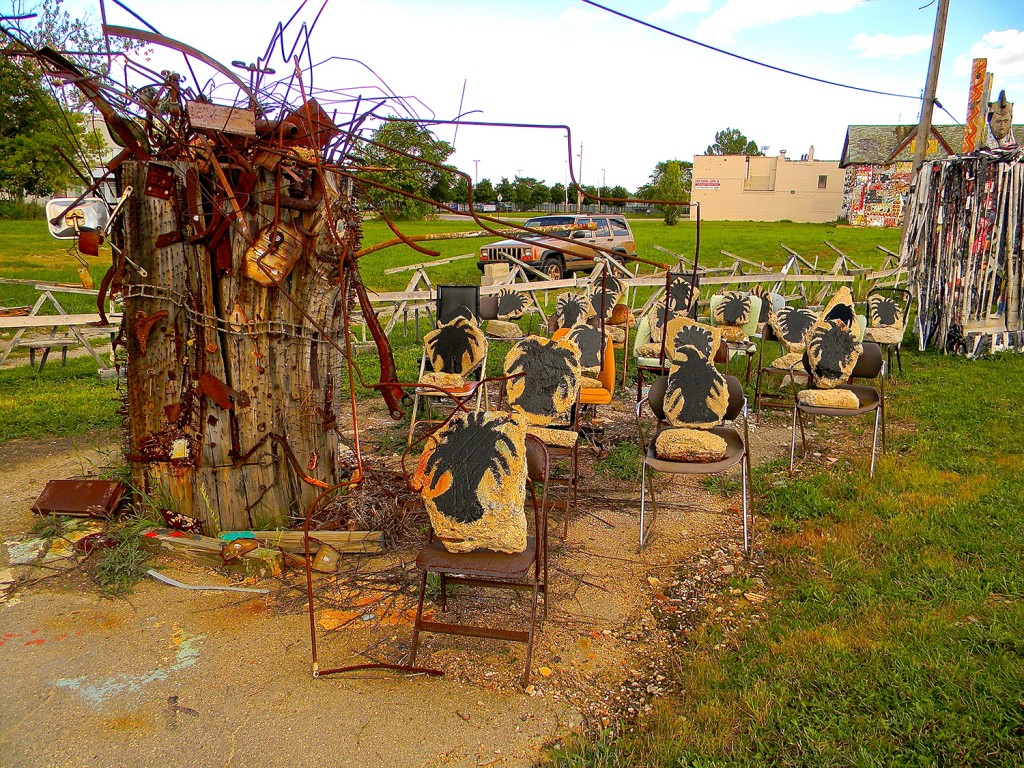 Working in Detroit’s near westside for years, artist and historian Olayami Dabls has created an art environment that is in conversation with a generation of artists that have been working with the detritus of material culture. Through the lens of the city’s economic decline and racial divide, Dabls creates sculptures and spaces to congregate that call to mind the work of Noah Purifoy, Tyree Guyton, Thornton Dial, Theaster Gates and Rick Lowe. His desire to create interior public space and belief in the transcendental experience of art fuels his desire to develop the African Bead Museum, on the corner of Grand River and West Grand Boulevard, into a fully functional museum of African art. Currently part of the Knight Arts Challenge program, Dabls is working through 2017 to match a grant of $100,000 for the structural redevelopment of the African Bead Museum, so that he can fully realize his mission to engage with the community through exhibitions, programming and classes.

2015 marks the thirtieth anniversary of the MBAD African Bead Museum, and Los Angeles-based artist Corazon del Sol, daughter of conceptual artist Eugenia P. Butler, and granddaughter of gallerist Eugenia Butler, has been working directly with Dabls to organize fundraising efforts. In a phone interview with del Sol, she elucidated her concerns regarding development in the City of Detroit. “So much art funding is being poured into the city,” said del Sol, “and all these middle-class kids are moving to the city and getting the funding. These new projects are amazing, but it is important to highlight what has been there.”

“What is Stroker” exhibition at Trinosophes/Photo: Garrett MacLean, courtesy Trinosophes

“A young, gifted and brick building in the magic city of sound”

Located on a corner of Gratiot Avenue just outside of downtown Detroit in the Eastern Market neighborhood stands a former spice-processing facility with a clean windowed façade. Just beyond the glass is Trinosophes, a gallery and performance space that is co-directed by Rebecca Mazzei, former deputy director of MOCAD, and musician and event producer Joel Peterson. Now beginning their third year, Mazzei and Peterson have embarked on an ambitious series of programming that highlights the intersection of music and the visual arts. 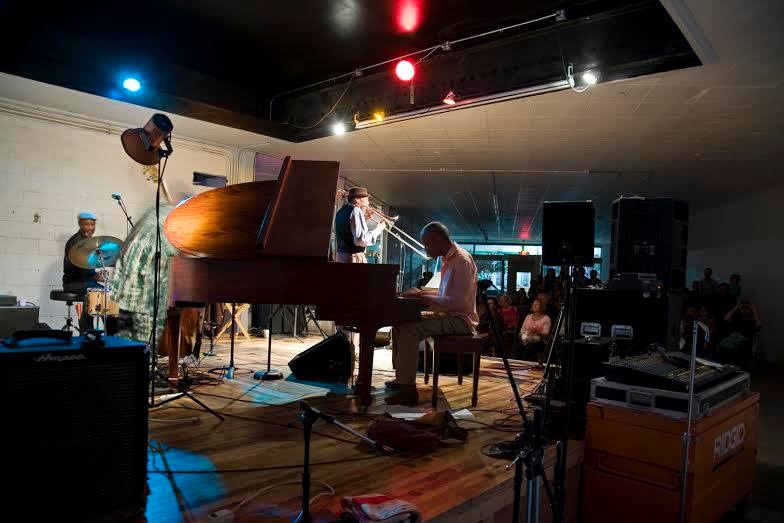 Their Detroit Commissioning Project, which the website states is “an initiative supporting ambitious new work by Detroit artists as well as visiting artists collaborating with locals,” was recently awarded a $10,000 Knight Arts Challenge grant. The grantees for 2015 include Thollem McDonas and Clem Fortuna, Bob Ostertag and Pat Lewis and Samantha Linn, as well as an unspecified “individual artist who has contributed significantly to Detroit culture.” Trinosophes programming has recently expanded to include a library that includes collections from notable Detroiters, with a focus on labor history, anti-colonial movements, Marxism, feminism, radical art and contemporary protest movements.

Recent programs include “Yusef Lateef: Toward the Unknown,” March-May 2015, an exhibition of visual art by the famed jazz multi-instrumentalist; “Detroit/Berlin Connection: What’s Next?,” a public workshop and discussion about the future of the Fisher Body Plant, and performances and residencies that feature local, national and international musicians. Upcoming programs include the Detroit Art Book Fair, presented by Dittoditto, an independent bookstore and publishing house founded in 2012 by Maia Asshaq and Andrea Farhat.