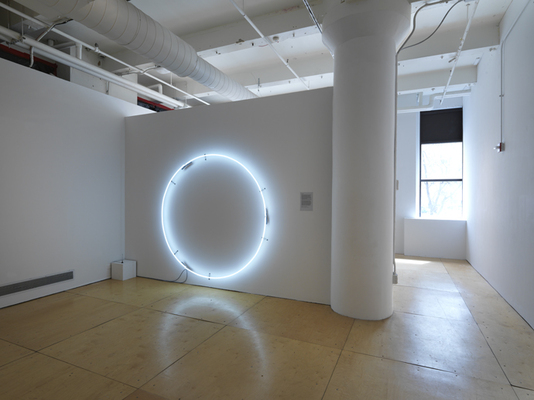 “After Today” purports a dichotomous nature in Chicago, a city overcome with struggles, but resilient and bent on improving the well-being of its inhabitants. A continuation of Gallery 400’s ongoing initiative “Standard of Living,” which delves into how we get by in today’s economy, the exhibition is an examination of Chicago’s present and future, the hardships of today and the aspirations for a better tomorrow.

Chicago’s wounds are not concealed. Poverty, violence and systemic injustice are unmistakable. Marianne Fairbanks’ “Patchwork Pall,” is a swing-set draped with a shroud dyed from the foliage encircling the houses of those forced to abandon them. The piece serves as a somber reflection of changing socio-economic and geo-political conditions, the mourning of a deceased community. 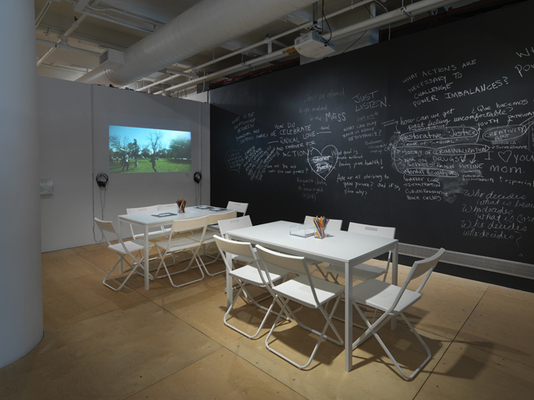 Taking a conversely more kinetic form, Jan Tichy’s large neon ring entitled “Chicago Nature (After Nauman)” is interconnected with police scanners which monitor Chicago’s long-suffering Englewood neighborhood. The ring illuminates each time a call is sent in from a patrolling officer. The work has an intriguing accord with Bruce Nauman’s “Human Nature/Life Death.” As Nauman’s neon peace sign flashed words such as “hate,” “pain” and “death” the viewer of Tichy’s work must contemplate the more subtle implications of what each flash of the ring represents.

“After Today” is not without hope. “96 Acres,” named for the footprint of Cook County Jail, is a series of community-activated art projects featured in a multimedia installation. The projects give voice to those who have lived in the constant shadow of incarceration, outside or within the jail’s walls. Community members express animosity over the omnipresent nature of a fractured justice system; while former inmates and young people alike search for hope in the most precarious of present circumstances.

Like Chicago itself, “After Today” is at a focal point between two realities, a present, shaped from an arduous past and the optimistic desire to cultivate a strong community in the days to come. This is a moment for reflection as much as a call to action. (Noah Hanna)