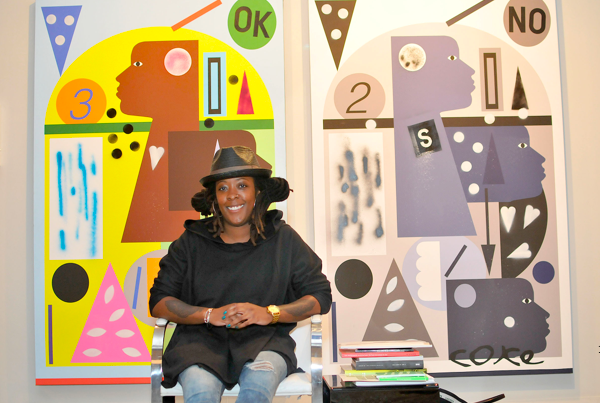 Nina Chanel Abney stands in front of a large auditorium full of people. It’s 2011, and she’s just been welcomed to the stage of Washington D.C.’s Corcoran Gallery of Art, where she’s giving a visiting-artist lecture. “I’m a little nervous, but it’s been very humbling to be a part of the ‘30 Americans’ exhibition,” she begins. “Just four years ago, I was in school and I signed up for an artist studio tour and we went to Kehinde Wiley and Wangechi Mutu’s studios—and now I’m in a show with them and it’s a little bit weird.” With a smiling mouth and quivering voice, she continues. “This is my first lecture, so I hope I do a good job for you guys.”

As she turns and begins flicking through an image slideshow projected on the large screen behind her, she cautions her audience: “Most that are familiar with me know that I rarely talk about my work in detail.” Large paintings loom across the screen behind her, swirling with bright blocks of carnival-like colors, flatly rendered masked figures and seemingly random text and numbers. Seeking inspiration from sources such as the latest tabloids, internet gossip and popular music, Abney’s paintings emit an aura of sensory overload in a digital age where information and opinions are easy to find and difficult to tune out.

With each slide that flashes by, Nina’s voice becomes more stable and her stance more at ease. As an artist who experienced rapid success immediately after earning her MFA, Nina is used to being thrown into the spotlight; just one day after the unveiling of her 2007 thesis show at Manhattan’s Parsons School of Design, Kravets Wehby Gallery sent her an offer for representation that would quickly grow to include a series of sold-out solo shows, widespread recognition and a waiting list for purchases. 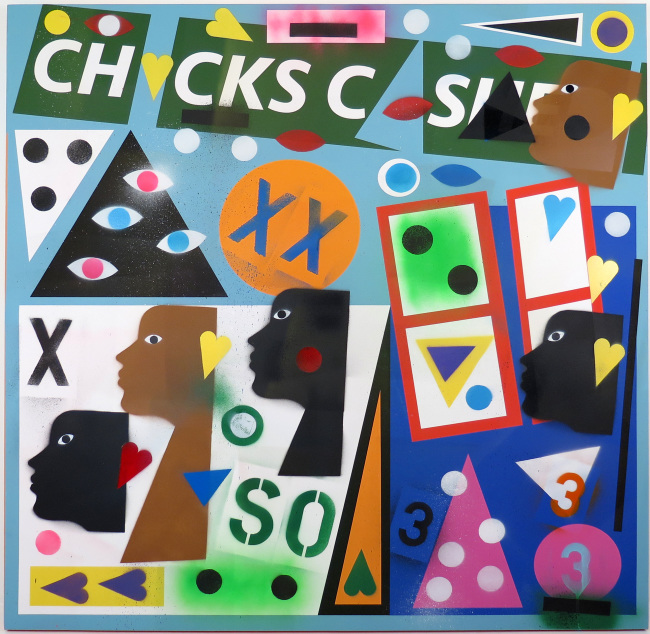 Abney pauses her lecture to play a clip of “South Park,” then chuckles before explaining she’s drawn to the show because “first they make you laugh, but then they make you think… I’ve characterized my work before as ‘easy to swallow but hard to digest’.” Abney achieves this in part by using bright, happy colors and simplistic shapes to depict happenings that are oftentimes difficult to address. Most recently, the Chicago native has debuted her first hometown show with “Run Run,” a twenty-five-foot on-the-wall installation at Monique Meloche Gallery in which brown and white figures with their hands raised in the air run through a field of colorful symbols, rainbows, text and numbers.

Nina’s lecture concludes, the floor opens for questions and a young woman raises her hand to inquire about the meaning behind a pair of figures on the screen that have three eyes. “I can’t answer that for you.” Nina says candidly. “A lot of people are grasping for meaning and want to know what every object is about. I like to let people figure it out on their own.” (Maria Girgenti)