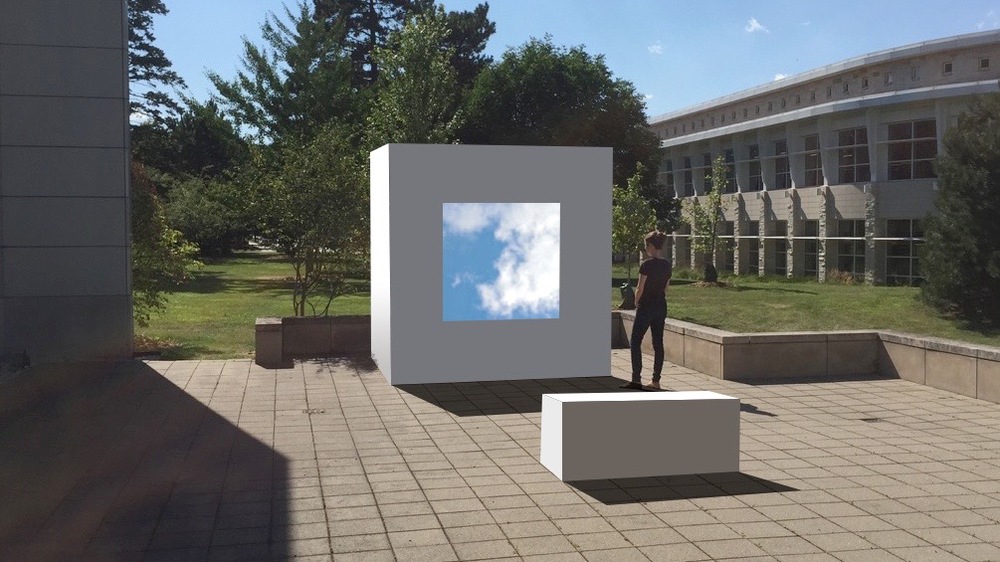 David Wallace Haskins’ “Skycube,” an outdoor installation that reflects and focuses the ever-changing three-dimensional sky, will debut on August 11 outside of the Elmhurst Art Museum. This three-ton cube (eight by eight by eight feet) will include a square aperture that brings the sky to a viewer’s eye level.

Haskins, a Chicago-based artist, works with a team of experts in various fields, including physics, ecology and psychology, to investigate and experiment with sound, time, light and space. Artists such as J.M.W. Turner and René Magritte have grappled with the sky in artwork, Haskins acknowledges in a phone interview, but with “Skycube,” Haskins invites viewers to participate in a phenomenological experience.

According to Haskins, “Skycube” is an opportunity to engage with uncertainty in the midst of a society that wants to control everything. The type of weather or time of day will impact this piece of art. Visitors may be visually immersed in a blue sky with white, billowing clouds during the afternoon; at night, they may see a dark sky filled with planets and stars. In this way, the installation is akin to “a living painting” that constantly changes. “Skycube” also has sculptural qualities, given its massive, cubic shape.

“Skycube” is the first of its kind for Haskins, but in previous works he has incorporated the concept of a three-dimensional sky in wall works. Viewers of these works have described the experience of seeing the sky in this way as a “spiritual or philosophical shift,” the artist explains. “By putting something so overtly familiar in an unconventional context, we are introduced to it anew,” argues psychologist E. Paul Holmes in his essay, “Regaining Our Balance,” in reference to Haskins’ “Skywall” and “Skycube” works. This transformation has the potential to evoke “mystery, wonder, and maybe even awe” in an introspective and contemplative space.

As an outdoor installation, Haskins’ “Skycube” will be publicly accessible at all times, offering transcendent experiences to those who stop by to have a mindful moment. Haskins hopes that this artwork will slow people down and open them up in their daily routine. (Amy Haddad)

“Skycube” opens at the Elmhurst Art Museum on August 11 and shows through the spring of 2016.