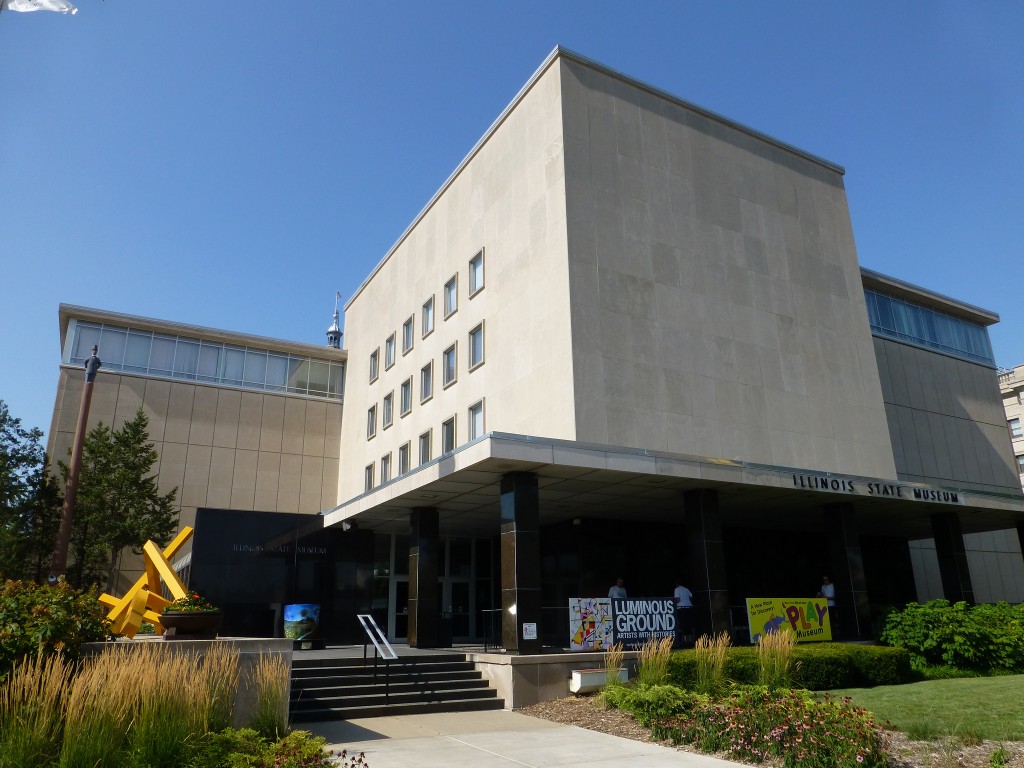 Last week, a bipartisan Illinois legislative commission rejected Governor Bruce Rauner’s proposal to close the Illinois State Museum system. The vote of the Commission on Government Forecasting and Accountability is a non-binding but weighty gesture against the efforts of the state’s Executive Office to reduce Illinois’ massive budget deficit through severe and uneven cuts in public spending. The Illinois State Museum is a network of five sites that serve distinct but complementary purposes in the preservation and cultivation of Illinois history and culture: a natural history and art museum in Springfield, an on-site archaeological museum of Native American history at Dickson Mounds, a contemporary art museum inside of a repurposed riverfront warehouse in Lockport, a gallery and artisan shop in downtown Chicago, and a museum and gallery in the southern community of Rend Lake. The cuts would reduce the projected $6.29 million annual operating budget of the museum system to $1.5 million, saving Illinois approximately $4.8 million in the next fiscal year. The retained funds would be spent maintaining the facilities and collections of nearly 13.5 million objects housed by the museums during their indefinite closure. Illinois will continue to keep rare and precious artworks and artifacts related to the heritage and history of the state, but the taxpayers who pay for the care of these things will no longer be able to access them.

Illinois residents are accustomed to poor fiscal management and its symptomatic rashes of budgetary slaughter. Rauner’s proposed closure of the Illinois State Museum is not shocking because it is uncommon, but because the logic of the closure is itself unbelievable even from the standpoint of fiscal responsibility. The budget that Rauner is wrestling to alter—one passed with bipartisan support by the Democrat-controlled state legislature—is almost $4 billion in the red, more than twice the amount of the previous year’s budgetary deficit, which was approved and then amended mid-year to adjust for anticipated shortfalls. For the coming year, the projected savings of closing the museums amount to less than one percent of the total projected deficit and less than 0.02 percent of the total operating budget of the State of Illinois.

The arts are not alone in these squabbles over imaginary pennies. Also included in the plan for deep cuts or total suspension are the state’s ceased contributions to the Low Income Home Energy Assistance Program, the abrupt closure of juvenile correction facilities, tight restrictions on eligibility for elderly services and low-income childcare, and large cuts to higher education. Critics have noted that the progressive values at risk among these proposed measures indicates Rauner’s effort to compel the legislature’s Democrats to join the negotiating table with violent threats to the party’s signature social and cultural allocations. Whether the product of savvy strategy or violent hatchet-swinging, the effects of the cuts are very real: the Illinois State Museum gallery in Chicago has closed its doors and returned consigned artworks to their owners, while the museum in Springfield has given back objects on loan from private collectors and other institutions. Both sites have cancelled current and upcoming exhibitions, including important shows by Native American artists. In other realms, funding for immigrant integration assistance, HIV and AIDS programs, and after-school teen enrichment programs have been called back since early April. In Chicago alone, these cuts hit hard in a city still reeling from the closure of fifty public schools last summer. 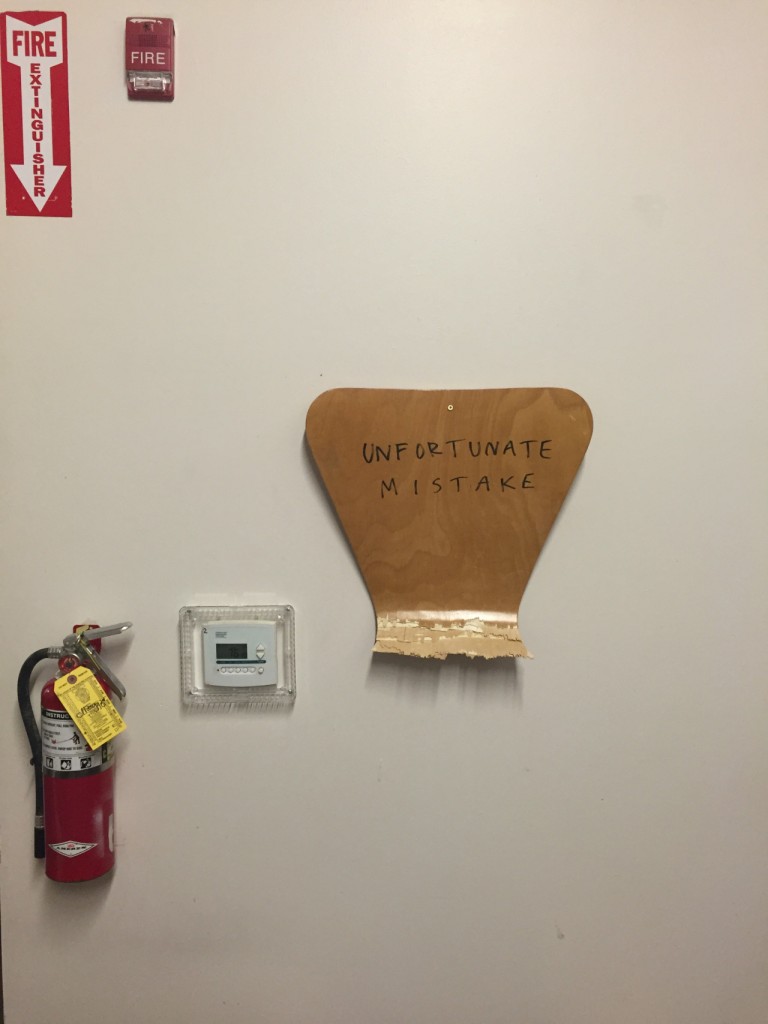 There are no clear statistics on how many Chicago Public Schools students dropped out as a result of the 2014 school closures, but surely, the forced migration of precarious youth across neighborhoods and gang lines had some profound cost which cannot yet be measured. Dropping out is rarely an act of courage, but a few former graduate students at the University of Southern California have made it so. In May of this year, the entire 2016 class of MFA students at the Roski School of Art and Design—formerly the Roski School of Fine Arts—dissolved their MFA candidacies after a year of upsets and disappointments during which the university administration drastically altered the terms of their acceptance letters to reduce their funding, undermine their curricular stability and faculty interactions, and curtail their studio visits. These seven students were not the only ones to leave: Last December, the program director A.L. Steiner stepped down. Soon after, faculty member Frances Stark, whose brilliant solo show currently adorns the first floor gallery of the Art Institute of Chicago’s Modern Wing, left due to unexplained friction with the administration. In an interview with the New Yorker in May, Stark supported the Roski dropouts, asserting that “the issues that led to this walkout, the lack of transparency or ethical behavior on the part of the USC Roski School’s upper administration, are precisely the ones that caused me to resign several months ago.”

The administration of USC has made no secret of its priorities with regards to the arts. The newly appointed Dean of the Roski School also serves as the director of the Jimmy Iovine and Andre Young Academy for the Arts, Technology, and Business of Innovation, a degree-granting venture in integrated design and arts that operates separately from the Fine Arts departments. Using the latest corporate lingo, the Academy’s mission statement calls the Academy “a transformational presence…[to] empower the next generation of disruptors …[to] ply their skills in a global arena.” In a state-of-the-art workspace and fabrication facility amusingly named “The Garage”— a name meant to evoke the rebellious and “disruptive” creativity of rock bands and the founding myths of tech giants such as Apple, which was begun in an actual garage—students transform their creative energies into monetized commodities that are ripe for the market.

All of this has little to do with art education and preserving cultural heritage, and this is precisely the point. At this leading American university, creativity is an asset to be nurtured for the sake of profit. If the fine arts departments will not concede to cooptation by the forces of capital, the engine of innovation will make a separate space to incubate the kind of growth it desires. Ironically, the Roski MFA students who left their program employed the very tactic of disruption that supposedly defines the ethos of these new, quasi-academic capital ventures. By dropping out, these former students not only made the shadowy deceits of their former university visible, they also made space for expansive solidarity amongst their peers. As they put it in their open letter to the dean of the school, dropping out was a means for “dropping back into our expanded communities at-large.”

The USC Seven left school without degrees, yet we have much to learn from their organizing principles. In July, hundreds gathered at the Illinois Statehouse to protest the proposed closure of the museums. Protesters made strong statements, some even linking Rauner’s slashed budget to the cultural destruction wreaked by the Islamic State at ancient sites and museums in Iraq and Syria. Among the many state services on the docket for dismissal, the Illinois State Museum has garnered the most attention and support. For lovers of art and culture, this is encouraging. However, this wellspring of attention should be shared with other causes, like social services for low-income families and funding for higher education and youth services. The museum, a place where culture and history are made visible, could leverage its timely visibility for widespread advocacy for state obligations. Since Rauner has already gathered these seemingly disparate causes on the chopping block, it is time to recognize the fundamental connectivity between culture and the people it serves, and to act on this solidarity with appropriate disruption.