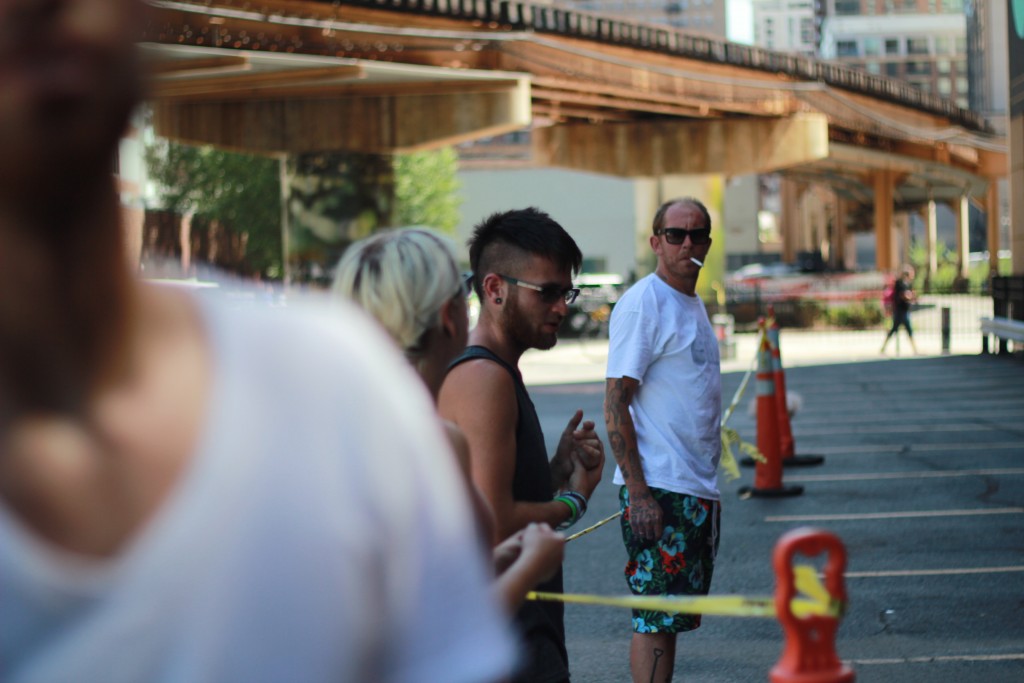 Ben Eine at the site of his mural on South Wabash

The sky is clear and the sun is hot. Two figures stand inside a lift that reaches the top of a two-story parking garage in the South Loop. Dipping and stretching their dripping rollers, they carefully paint around a twenty-four-foot-tall letter “A.” As I get closer, I notice a third figure standing below them. Feet pacing and eyes looking up, he squints into the sun and lights a cigarette.

“Ben?” I ask. The artist turns around quickly, smiles and shakes my hand. Beads of sweat glisten on his forehead, and his hands and face are covered in orange paint. Despite my surprise visit, he is welcoming and good-humored. Motioning upwards, he wastes no time in explaining his current project. “So, seven letters. I wanted it to be positive, I wanted it to be happy—” He is interrupted by a parking attendant who’s asking the status of the lift’s next move. As he walks off to instruct, I make note of his attire: the bold décor of his countless tattoos, Hawaiian print shorts and bright blue sneakers complements the colorful 240-foot long mural-in-progress, which spells out “HARMONY” in swirls of neon paint.

He walks briskly back and says, “It’s a public space. I would like to write something else, but it’s not my wall.” I ask what he wanted to write, and his wide grin reveals a golden tooth. “I don’t know… Scabies? Yes, scabies. In a really beautiful font.” He flips his cigarette and adjusts his Prada glasses. “And I found out spray paint is banned in Chicago. To have a can of spray paint is a felon. So I have like, two-hundred felons!” 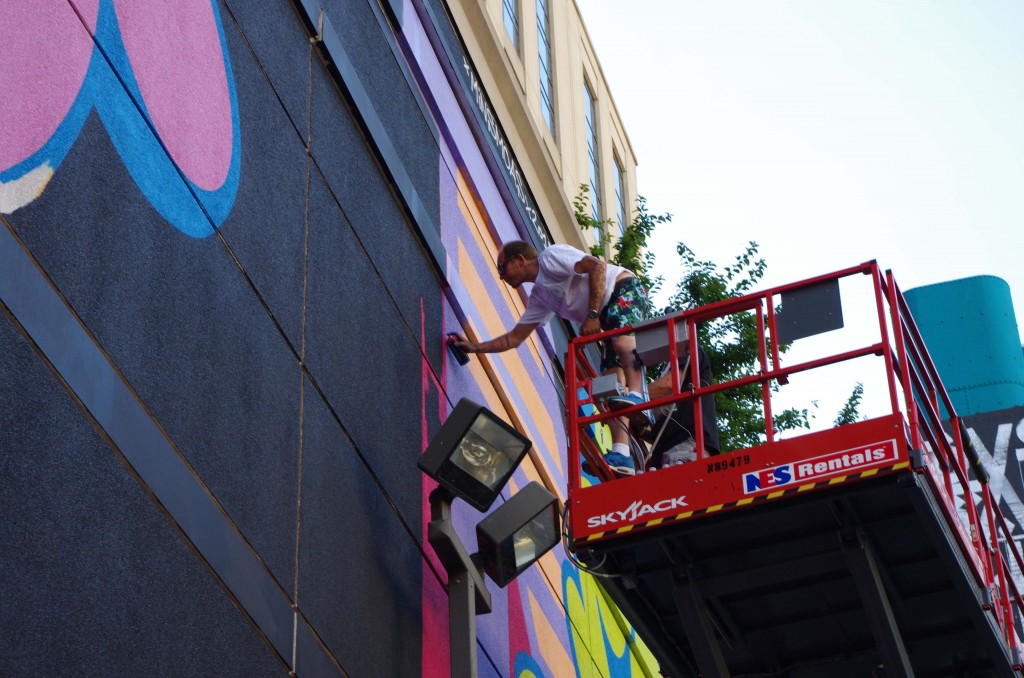 Ben Eine working on his mural at South Wabash

With multiple convictions for criminal damage and a tattoo reading “guilty” across his neck, the London native is no stranger to bending the law. At age fourteen, Eine began tagging trains and walls with bright, colorful lettering. As an adult, he worked a respectable day job and continued tagging during his lunch hour. When Britain’s prime minister gifted Barack Obama one of Eine’s screen prints in 2010, Eine was immediately recognized as a leading figure in the contemporary street art movement whose signature letterforms recall the heyday of old school graffiti.

Eventually, I ask about Banksy and his easygoing demeanor vanishes. Eine is frequently mentioned alongside Banksy, as they were once friends and collaborators. To break the tension, I ask him to answer in three words. “Go fuck yourself,” he says. I laugh, and he caves. “Selfish, rude, obnoxious.” Pausing, he adds a fourth: “Genius.”

Eine changes the subject to bring up his current show at Vertical Gallery, which features his work alongside that of Sickboy and Word to Mother. “They are two of my favorite artists,” he says passionately. “And we don’t just paint walls. Half of what we do is talking to people like you. We are weirdly a brand, and if you want to be smart and successful you have to take it a little bit seriously.” (Maria Girgenti)