Started as a Tumblr project by Marc Fischer and Public Collectors, “Hardcore Architecture” explores the surprisingly suburban outposts of hardcore underground bands from the 1980s, juxtaposing names like Suburban Mutilation and Crimes Against Humanity with cookie-cutter homes, two-car garages, and well-maintained lawns. The exhibition is housed at The Franklin, a home with its own two-car garage and well-maintained lawn, and includes the Google Street View images Fischer culled alongside zines and a display of T-shirts and tapes from the artist’s own collection.

The exhibition’s DIY sensibility—Risograph images printed on newsprint are simply taped to brown backing on The Franklin’s walls—aligns with the quality of “Maximum RocknRoll (MRR),” the magazine from which Fischer culled addresses for the homes. The collectively run magazine listed reviews of bands with an associated address and dollar amount for buying tapes, urging fans to connect to the artists via their mailboxes with handwritten letters. The homes, which were often the childhood homes of a member of the band, display the containers of their upbringing, which contradict with the band logos and other imagery that exemplify the ideals created in the basements of these same homes. 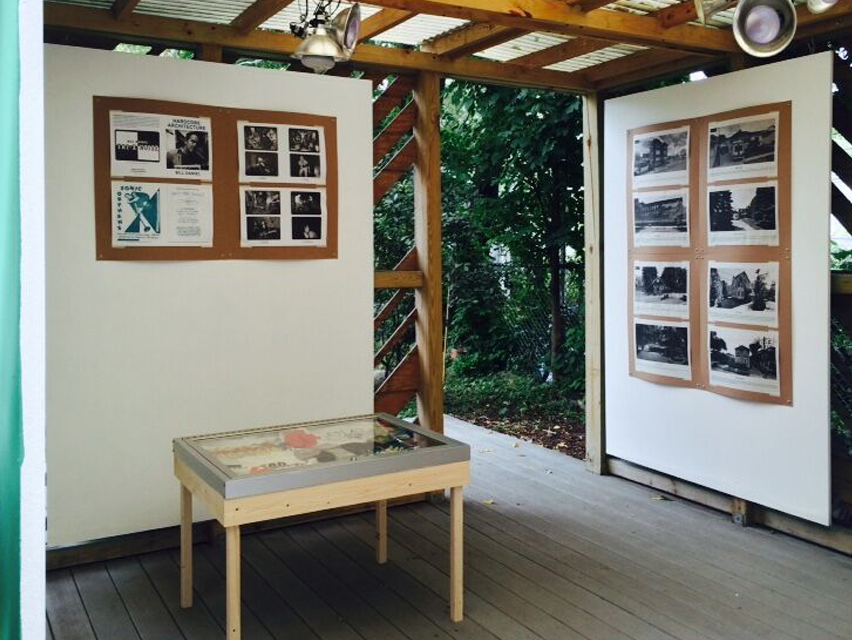 The composition of the digital images contextualize Fischer’s hand in the process—their cropped frame eliminating the addresses he culled in order to protect the current residents of the homes, some of which are still the members of bands featured. Fischer also captures the images in a way that expresses complete photographic control as he digitally cruises down the street in order to get the best view of the home, landscape, and surrounding suburban terrain.

The exhibition provides a domestically visual vantage point of bands that have previously been absorbed audibly, marking with a pindrop the types of environments the bands were lashing out against. An interactive component by composer Norman Long offers guided sound walks that ask participants to tune out visual stimuli, instead focusing on the acoustics of the Garfield Park neighborhood. (Kate Sierzputowski)

Through August 29 at The Franklin, 3522 West Franklin.