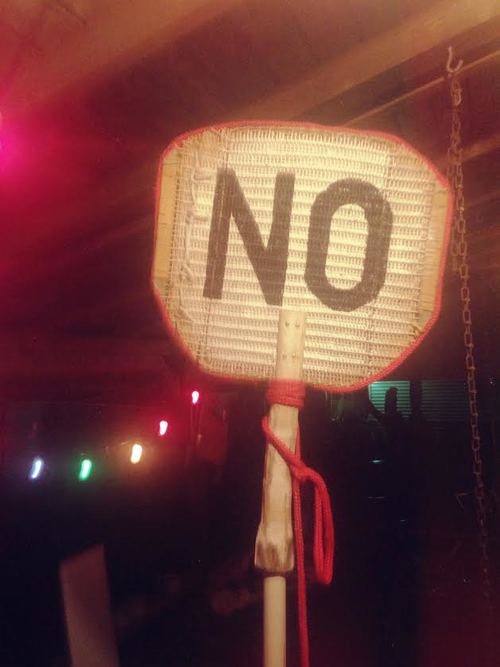 As Chicago swelters in the high eighties, Nolan Simon and Dylan Spaysky have installed the gallery at Night Club with fans made from banal household items: candle lighters, antennae, pine branches, and carpet. This show deigns to beat the heat.

Painted on these fold-out facsimiles are images of police violence and displacement, migrant travails and riot shields. All but one of the fans are displayed with only the front in view, and the only fan with a visible back declares one word: “NO.” This refusal—of another side, or of the viewer herself—mirrors the painted fronts in a tone of accusation. By locating state repression on handheld fans, the artists fan political flames and bring the war home through their artifacts of everyday construction.

Do the rough-imaged accounts of photojournalist aesthetics cue the viewer into their own accountability toward these issues, or do they merely proffer “awareness”? The fans—made uselessly cumbersome and, in any case, fixed to the wall—suggest our impotence. In perfect coincidence, Night Club’s air conditioning broke down just before the opening, rendering the space humid, sweltering and still. Helpless in the heat, we bear witness to the paucity of merely knowing these phenomena, trammeled in the winds. Can we cool ourselves down?

Fans winnow, disburse and relieve. We consume these paintings, thereby dispelling the attendant heat. There is often a deep disparity between “those things which make art and those things which art makes,” Jutta Koether notes in her novella “f.” To sit idle and to speak is to “bloviate,” a word derived from “blow.” The simulations at Night Club have a similar bent. Fans: when cheering or buffeting, we might get too distracted to notice the content. The work in this show overlays the painted image or scene above, obliterating its household support. The continual distraction between support and painting makes viewing a little more uncomfortable. This is not because there are queries of what role these little artifacts play in the happenings depicted—which is a facile point, in any case—but because two different aesthetic pleasures are combined. “Fights” gives us our own, because it offers little relief. (Paul Smith)