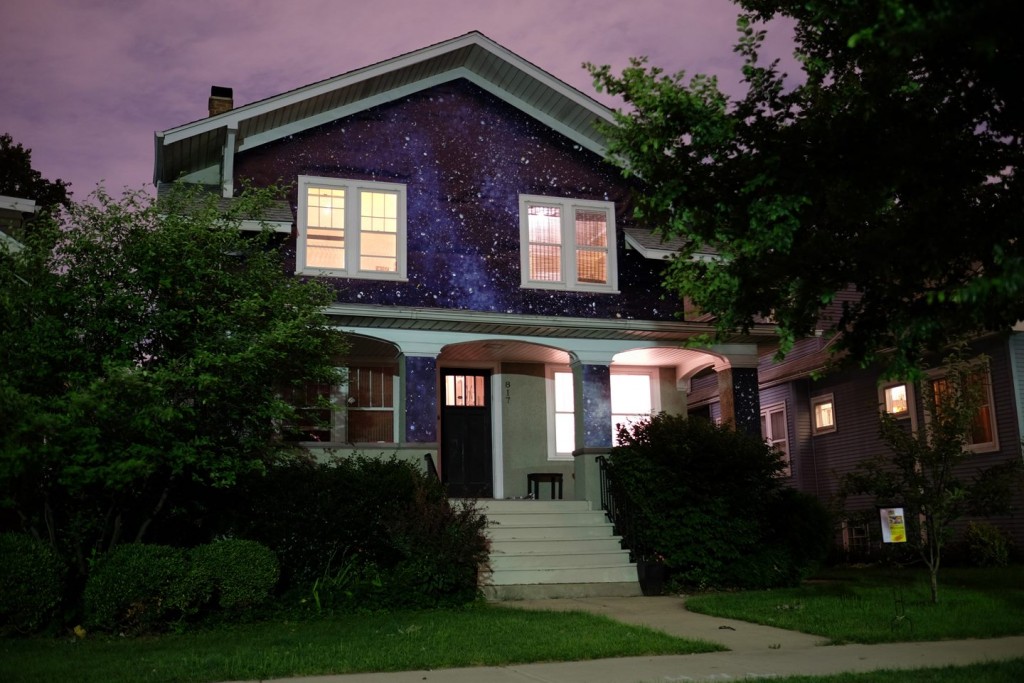 Playfully eschewing stereotypes of pink flamingos and garden gnomes, the 2nd Terrain Biennial is dedicated to featuring interventions into the conventional landscape of front yards by emerging as well as established artists who have been invited to create site-specific works. Founded in 2011 by Chicago artist Sabina Ott, contributing artists are selected for their ability to challenge the space between public and private, function and decoration and figure and ground.

This year’s biennial takes an international scale, but remains centered in the Chicago suburb of Oak Park across from Longfellow Middle School on Highland Avenue. Unlike many alternative exhibitions, these public artworks will be accessible at all times. According to Ott, one of the goals of the exhibition was to engage pedestrians, visitors, teachers, students and neighbors with myriad forms of contemporary art. Another goal with “Terrain 2.0” was to expand the scope beyond Oak Park.

“It seemed that the Biennial would be more interesting,” explained Ott, “if there were curators other than myself and locations that varied geographically. I have been thinking about Terrain potentially becoming a worldwide phenomena—a grass roots kind of thing, by which people could produce and present artworks in their yards and in their neighborhoods as a means to break down the hegemony of the museum-gallery-art fair system and have world class art in the front yards across the globe. This has actually happened!”

The Biennial gathers seventy-five artists who have created site-specific works in sixty locations internationally. And while the epicenter of the exhibit is still in the leafy hamlet of Oak Park and surrounding communities such as Riverside and River Forest, the Biennial includes displays in Milwaukee, Wisconsin; Memphis and Knoxville, Tennessee; Sioux Falls, South Dakota; Asheville, North Carolina; Dallas, Texas; Oakland and Los Angeles, California; Viborg, Denmark; Ontario, Canada; and Phnom Penh, Cambodia.

“Each installation is amazing,” Ott glowed. “The artists have really gone full on, no holds barred, with this project. Kate McQuillen covered curator Claudine Ise’s entire house with an image of the night sky that glows in the dark. Robert Burnier has a tangle of tents as if a hurricane struck the yard of artist Scott Stack and Allison Ruttan. Bernard Williams installed a huge racing car built of wood in the front of the Oak Park Art League.”

To augment the exhibits, Ott enlisted a team that included Aubrey Manson, a recent MFA graduate student from the School of the Art Institute of Chicago, to produce the website for the Biennial, which will provide information, documentation and details on the participating sites. The 2nd Terrain Biennial is supported by a 2014 Propeller Fund Grant, the Guggenheim Foundation and a community supported Hatchfund campaign. (Mahjabeen Syed)

The 2nd Terrain Biennial will run from August 23 to September 30 at multiple locations. More information is available at terrainexhibitions.tumblr.com.