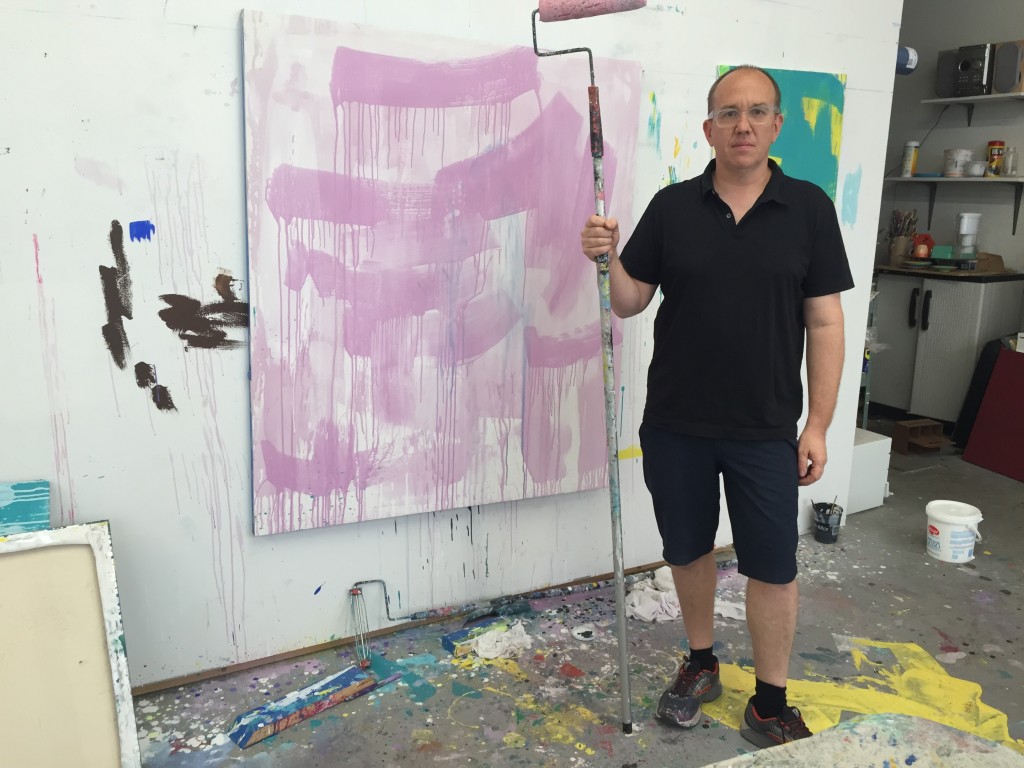 Scott Reeder in his Detroit studio 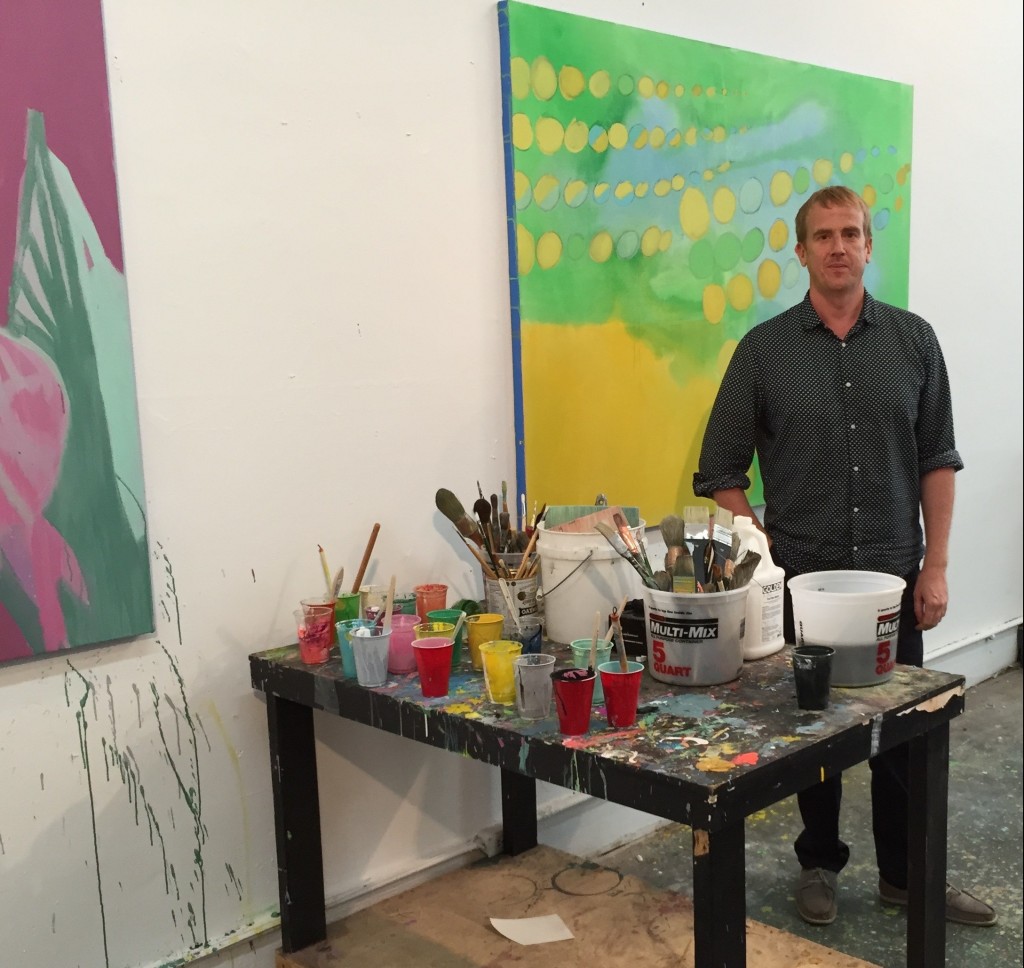 Tyson Reeder in his Chicago studio

In a year of important anniversaries at major visual art entities in Chicago, none is more surprising, or significant, than the 150th birthday of the School of the Art Institute. Surprising, in that unlike so many of the city’s oldest leading cultural organizations which were founded in the 1890s and are thus a mere 125 years old or so, SAIC was founded as the Chicago Academy of Design in 1866, five years before the Great Chicago Fire. And its significance, already noteworthy in evolving into one of the top art educators in the world, is magnified by the fact that it was the school that later gave birth to the Art Institute of Chicago itself.

Among the various celebrations planned for this milestone, one of its centerpieces is an exhibition called “Civilization and Its Discontents: SAIC Alumni Exhibition, Selections from 1985–2015,” which runs September 1-October 24, and hosts its reception on Friday, September 18, 6pm-9pm, at the Sullivan Galleries, 33 South State, Seventh Floor. The exhibition, which features about three dozen artists who’ve graduated in the last thirty years, is curated by the brothers Scott and Tyson Reeder, both faculty members at the School, and both accomplished visual artists in their own right. I discussed their collaboration in person with Tyson and via telephone from Detroit with Scott.

The SAIC show you’re curating is a centerpiece of the school’s 150th anniversary but covers just the last three decades. How did the whole thing come together?
Scott: We wanted to focus on the last thirty years because that is a story that maybe isn’t told as much about the school. I think people know a lot about the Imagists, but then there’s that time after that is lesser known, especially outside of Chicago. 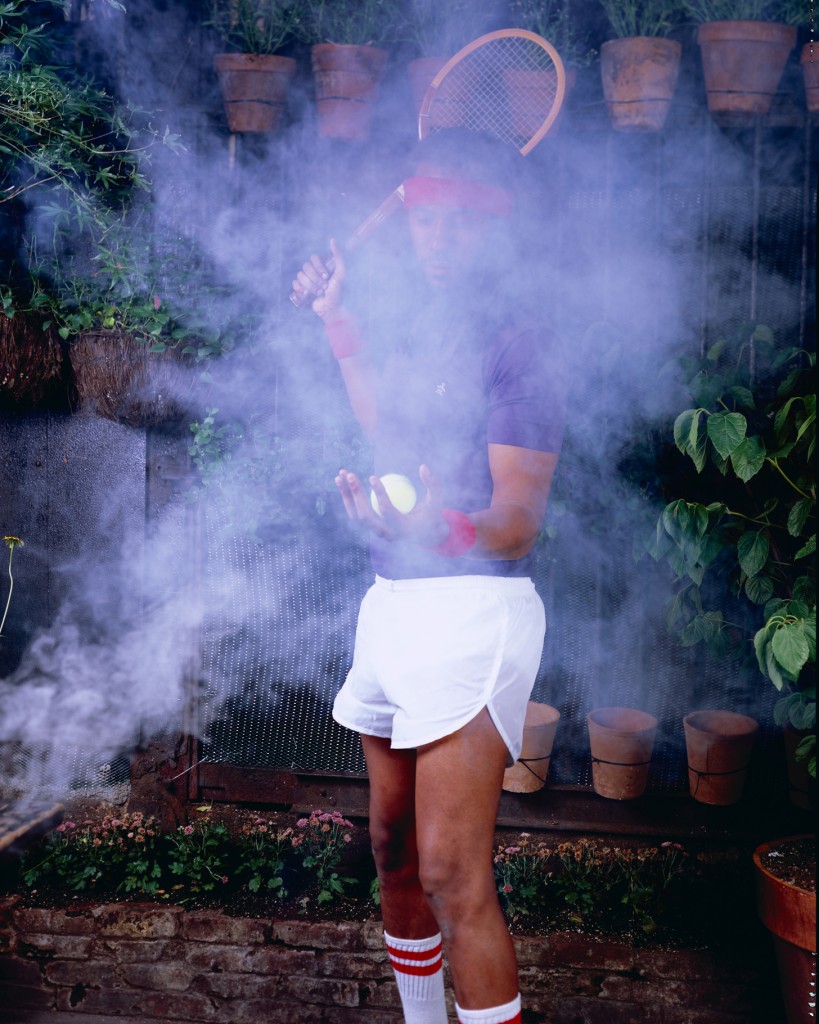 How did you go about choosing the artists and their work?
Scott: If the Imagists were really good at building these sort of internal worlds, then the group of artists we’ve chosen for this show are a little more concerned with the external world. We titled the show after the Sigmund Freud book, “Civilization and Its Discontents,” a pretty broad title, but a lot of the artists in the show have a political or identity aspect to their work. And we wanted to include this Chicago community of collectors. We borrowed a lot of the work in the show; I think almost all of it is borrowed from local collections.

Tyson: We’re trying to fill a little bit of a vacuum in what’s been celebrated locally, not as a counterpoint to this sort of more widely known Chicago history—specifically in painting—but more as an extension or continuation of the already rich, celebrated history of pre-1985 work. We’ve been in the Midwest long enough to have a connection to a certain generation of nineties grads: people like Jessica Jackson Hutchins, Siebren Versteeg, Rebecca Morris, Amanda Ross-Ho. The discontent part is a little bit tongue in cheek that can be discontent in sort of a formal way, a kind of rigorous attack on shared traditions—in something like painting or sculpture—or in a more political sense, like Tania Bruguera or Rirkrit Tiravanija. It’s also playing on the inherent rebelliousness of being an art student at an art school. Jerry Saltz talks about caring and not caring: steeping yourself in knowledge in what you do in a great school like that, absorbing as much as you possibly can, but also having a moment late at night in your studio where you kind of rebel against it.

Did you do something with, like, contemporary work versus student work?
Scott: That was originally an idea: you’d have one new thing and one old thing. But it was just kind of difficult. Some artists didn’t want to be represented that way. Some people just didn’t have their old work. Tyson and I curated something at White Columns in New York several years ago. It was called “The Early Show,” and it was all work made in high school or before. It was a mix of established and more emerging artists, but it was a really intense show to organize because we were sometimes borrowing things directly from somebody’s mom. “I’d better get this back!” You know? Jeff Koons was going to be in that show, but he wanted to show this photograph of himself as a child that is actually a part of his real, mature work. So we had to reject Koons from the show because part of that whole show was you had to be comfortable with a certain amount of embarrassment or potential embarrassment that you were going to show this early work. 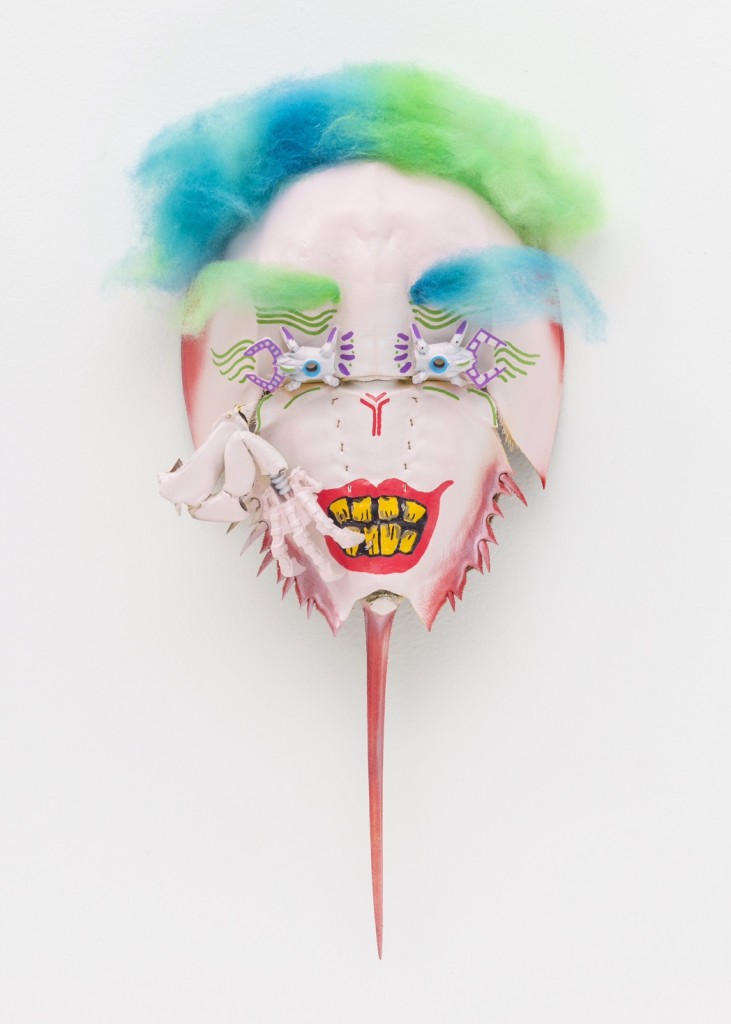 What’s the show going to look like when you walk in? How is it organized?
Tyson: It’s about half as much work as you’d normally see in, say, an MFA show. So that might be one way to visualize it; it’s hung a little more sparsely. It’s white walls with evenly spaced work, but it kind of sparkles in a space that’s usually content to have a ton of work. The face-offs get kind of interesting. We have Sterling Ruby, nineties undergraduate degree, paired with Gordon Hall, who is a more recent graduate, maybe three years ago. There are those kinds of tensions between completely different generations. Jeanne Dunning is right near a Puppies Puppies who graduated like two years ago. Then there’s this kind of memory lane or this lounge that we’re constructing. To the left as you come in, there will be this more dimly lit space, the dead-end of this long corridor, and we planned on tiling the walls with images that have been trickling in from artists of just anything from when they were a student. We’re getting a lot of student IDs that we’re going to blow up really big. Everybody has crazy haircuts and looks completely different. We’re also getting social images of people hanging out in their Logan Square apartment in the nineties or of a band they saw. That’s a way to rope in Chicago as a community extended beyond the school. The other component to the lounge is every artist is giving us one song that they would consider the soundtrack to their life as an SAIC student and we’re making a mix tape of all of these songs that might be on sale or just playing in the background. The other component in this lounge is some T-shirts that are specifically taken from pieces in the show—really nice wraparound shirts by Vis Com alums who run a store called Maybe Sunday in Pilsen.

Talk a little bit about your collaboration and your story.
Scott: I’m older by like four years. We don’t really do much collaborative painting; those things are sort of separate, our painting practices. As kids we had a secret band. We usually didn’t play out; it was just in our parent’s basement. We still have that secret band when we go visit our parents for Christmas. We make an album every year. We’ve always done stuff together, but I think our big art collaboration is this space we had in Milwaukee, the General Store, that was half gallery and half store. We did two Milwaukee art fairs in this Polish bar that has a bowling alley in the basement. Then we did two art fairs, one in New York and one in Cologne, that were in the dark—they were called Dark Fair. They were all lit by candles and flashlights; there was no electricity or very limited electricity. We’ve done a lot of curatorial kinds of projects over the years; the common thread is that they have some kind of limitation built into them. Another show we did was this four-colored pen show, where we asked sixty different artists to make drawings using those ballpoint pens that have the four colors red, green, black and blue. Each artist we sent a pen. It was kind of interesting the way it leveled the playing field. It wasn’t necessarily the biggest artists who made the best four-color pen drawing. We did two shows with Gavin Brown in New York: “Drunk Vs. Stoned,” where we divided up artists into either camp. We just took the dictionary definition of the two states of being: drunk is lowered inhibitions and stoned is heightened sensitivity. So most artists are either one or the other. Agnes Martin would be stoned. Jackson Pollock: drunk. We’ve had pretty good luck with our curatorial things getting a lot of people to say yes, and I think it’s because when you’re out showing—once you’re done with school and you’re an exhibiting artist—there’s a lot of pressure for you to develop a style of work and stick with it. There’s not a lot of room for experimentation or serious play or whimsy.

Tyson: Even when we were in college and younger we would team up in the summer and make videos. The way we’ve come together is a sort of shared community of friends. These friendships have lent themselves to these curatorial projects. That’s also the benefit of this show: this network of people who have different intersections to us than just a cold email from a curator. 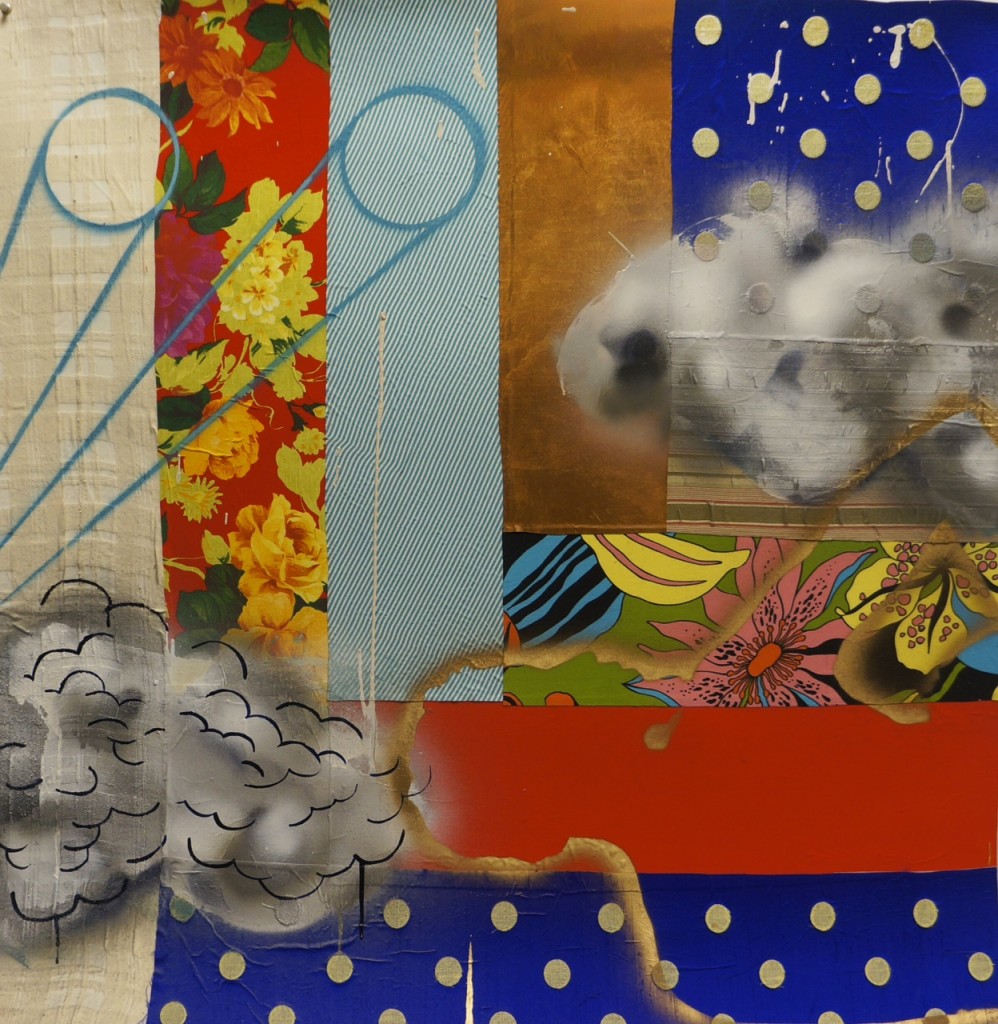 When you guys are doing this curation together, whether it’s the SAIC show or anything else, what’s your process? Do you fight like crazy?
Scott: It usually doesn’t get too contentious, but it is always surprising. Even when we’re selecting work for the show, we’d have four different drawings and invariably I would be like, “Those are definitely the two good ones!” and Tyson would say the other two are the good ones. Usually we come to some consensus. There hasn’t been a lot of conflict. As artists we’re different. Tyson is, I think, more of a materials person and I’m maybe more of an ideas person. Tyson is a real painter’s painter. So we both have this thing where we make lists, in our studio practice, of possible paintings. My lists are all words about the content of what to paint, and then Tyson’s idea list is like “blue polka dot on gold” or “black scribbles on pink”; it’s like he’s thinking more in color and surface and materials.

Tyson: I definitely think he has a more conceptual approach, where a lot of times he makes these lists of ideas and executes these ideas. He used to make a dartboard, where he’d have three ideas for a painting, and then just throw it. He’s into this kind of chance process where the title or the idea precedes the making. I think I have an inverse approach, where I’m more of a sensualist where I find something through the making: through playing with color. I get an idea halfway through making the painting, if that makes any sense. There’s a kind of chance embrace of just kind of starting and maybe more of an old-fashioned sense of solving a painting through the labor of it. I think that’s a key difference.

Any final thoughts?
Scott: I don’t want to make it sound like we weren’t interested in the Imagists. Part of the reason Tyson and I wanted to teach at the Art Institute was that we both were really influenced by the Imagists when we were younger and we love their work still. We’re just trying to add on to that story. It’s not supposed to be a counterpoint or dismissive or an attack; it’s just adding on to that history that’s already really rich. I just wanted to make sure I said that because I know that, for some people, it might be disappointing or misleading if they want to see 150 years of work, but that’s not what our angle was. We’re not curators, really, we’re artists, and we are seeing everything through our own quirky Reeder lens.

This interview was published in EXPO Chicago magazine 2015.