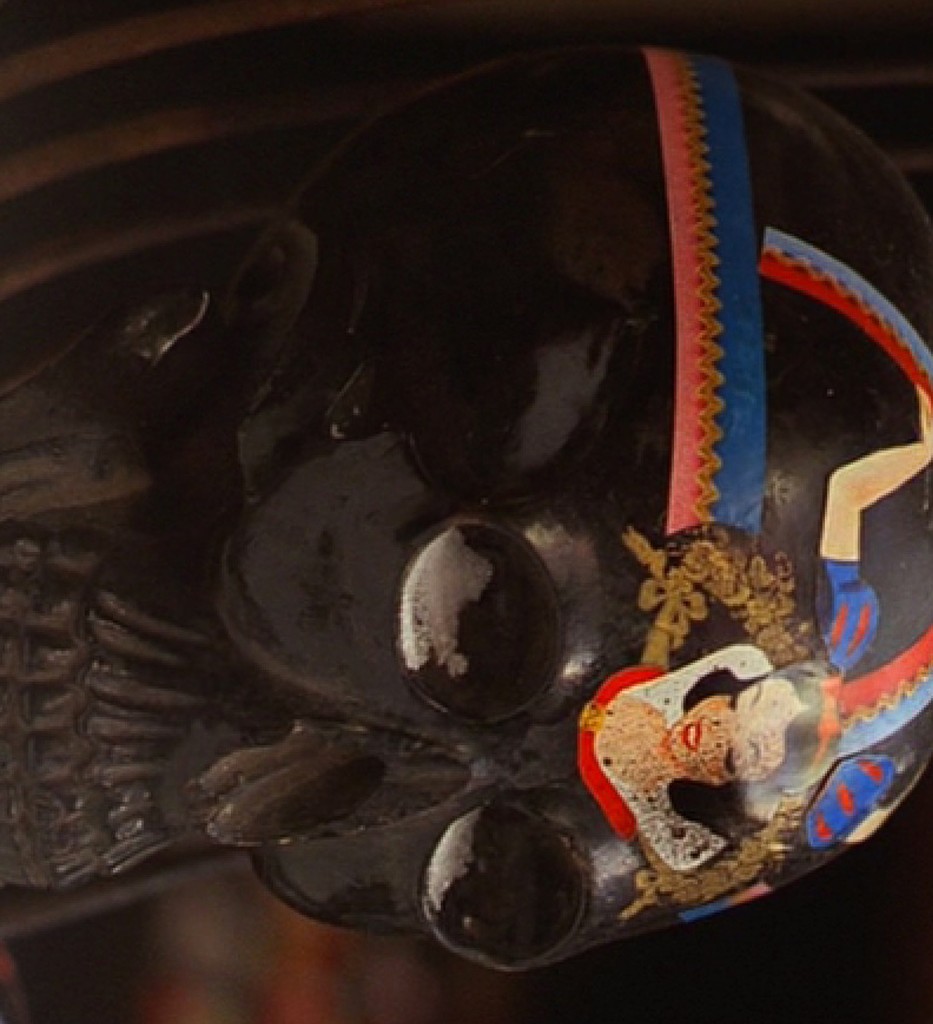 The thing that was sent to me in its intended but unsettling orientation.

The above image was sent to me anonymously in the middle of the night. Shocking as it appears, I was relieved to receive it. You see, weeks ago I had contacted a few artist friends to ask them to reflect on the upcoming fall art season in Chicago and to ask one to “take over” the task of appraising it. To my surprise, they were reluctant to describe it, even those who had exhibitions of their work opening in the coming weeks. Later, I realized that their silence was my doing, having asked a question that could produce no coherent answer.

Much like the drawing game made famous by the Surrealists, Chicago’s 2015 fall art season is an exquisite corpse—a thing of grotesque beauty that is the dream of no one, but the creation of many. At first glance, it appears sinister, like the Block Museum’s solo show of newly commissioned works by Chicago artist Geof Oppenheimer. Rumor has it that the sculptor has filled the museum’s ample galleries with austere and foreboding installations resembling the cinderblock constructions of grim institutions, like prison, or perhaps your corporate office. Even more menacing, Irena Haiduk, also Chicago-based and also exhibiting new work, will haunt the eaves of the Renaissance Society’s transformed gallery with the Sirens of Greek mythology, luring visitors unexpectedly into a debate on the revolutionary possibilities of art and social change amidst current political upheaval worldwide.

Indeed, international politics emerge as a significant subject this season, with the National Museum of Mexican Art taking on the history and present-day violence against Mexican immigrants to the United States with visceral, new sculptures by Rodrigo Lara Zendejas. At the Museum of Contemporary Photography, North Korea is in focus by way of official and unofficial images of life in the “Hermit Kingdom,” where the movement of people and information across borders is strictly state-controlled.

On a happier note, this season brings several art anniversaries to celebrate. The School of the Art Institute of Chicago marks its 150th year of educating artists with an exhibition of work by significant alumni in its Sullivan Galleries and a series of alumni talks with notables Chris Ware and Jeff Koons. Russell Bowman Art Advisory is celebrating its thirteenth year with a group show of its stable favorites, while the Loyola University Museum of Art is honoring its ten years with a collection show and “greatest hits,” including a reprise of its 2008 exhibition of Warhol’s “Silver Clouds,” a room filled with roving silver helium pillows first realized at the Leo Castelli Gallery in 1966. The Smart Museum will mark the 125th anniversary of the University of Chicago with a purportedly experimental installation of works from the collection that speak to the notion of memory, cultural and institutional, as well as a show on Expressionism in a century of German and Central European art. If their 2014-15 season is any indicator, these exhibitions will be as rewarding as they will be unexpected.

Another University of Chicago venue, the Logan Center, will show recent video and photographic works by Agnès Varda, the great French New Wave filmmaker, who will be present for a week of residency culminating in a lecture and screening. For experimental film enthusiasts, this will be a chance to witness history. Speaking of history, Intuit will present an exhibition of the captivating and disturbing collages by World War II veteran Richard Saholt, an exquisite-corpse-maker in his own right.

The stomach of this beautiful beast will be EXPO Chicago, our fair city’s one and only international art fair, resurrected four years ago by the enterprising Tony Karman and this year stronger than ever. I have said it once and I will say it again, no American city surpasses Chicago in the rigor of its visual arts—whether this is its greatest strength or its weakness is the matter of a separate debate. This year, EXPO will host its largest series of artist projects and conversations to date, including such highlights as Hans Ulrich Obrist in conversation with members of the Hairy Who—Gladys Nilsson, Karl Wirsum, and Art Green; in a different conversation, Solveig Øvstebø, Thelma Golden, and Franklin Sirmans—all curators of important institutions—will discuss the value and impact of public art collections, moderated by Jacob Proctor.

For those looking for some kind of relief, even of the comic variety, the South Side Community Art Center will present “Black Comic Book Heroes and Villains,” which promises to respond with humor to some of the more serious questions of black political consciousness raised in the Museum of Contemporary Art’s summer and fall headliner, The Freedom Principle, which is a must-see before it closes in November.

In the West Loop, the Chicago Artists Coalition will present a solo exhibition by Myra Greene incubated during her residency there, an exhibition of collaged, quilted and photographed African fabrics that beautifully take on formal questions as well as symbolic concerns. Also showing collage, Rhona Hoffman will exhibit abstract figurative works by Nathaniel Mary Quinn in the Brooklyn artist’s first solo show. In his Washington Boulevard space, Kavi Gupta will show a complex installation of new sculptures, paintings and other objects by Scott Reeder, who has also curated with his brother Tyson Reeder the SAIC anniversary exhibition mentioned above. Shane Campbell has a very busy season, starting with the fanatic abstractions of Mimi Lauter and the weighty constructions of Japanese formalist Kishio Suga.

Another major organ of the Chicago corpus, the newly minted Architecture Biennial will bring many great minds together to contemplate the history and future of the built environment. The subject of its own special Newcity issue, it is enough for now to note that several major institutions are partnering with the citywide event. The MCA will open the first solo show of Polish architect Ania Jaworska, who will present abstract prints related to architectural ideas. The Art Institute will debut the first comprehensive exhibition of work by David Adjaye, the international architect with African roots whose projects address local contexts and history in consideration of the global legacy of architectural modernism. In the States, he is best known for designing the Smithsonian’s National Museum of African American History and Culture.

There is much more art to see this fall in Chicago than can be captured here. My thoughts return to this sideways fossilized skull with its Disney princess adornment, sent to me no doubt as revenge by one of the artists I mercilessly polled to assemble this preview. It is an unlikely mascot for the fall, but I will take it as the head of this season’s exquisite corpse and like its body, the new and the bizarre will butt up against the seasoned and the dead this fall in Chicago. The result will be something none of us could have predicted, but we will all find beauty in one place or a few, and perhaps also in the incongruity of the juxtapositions themselves.