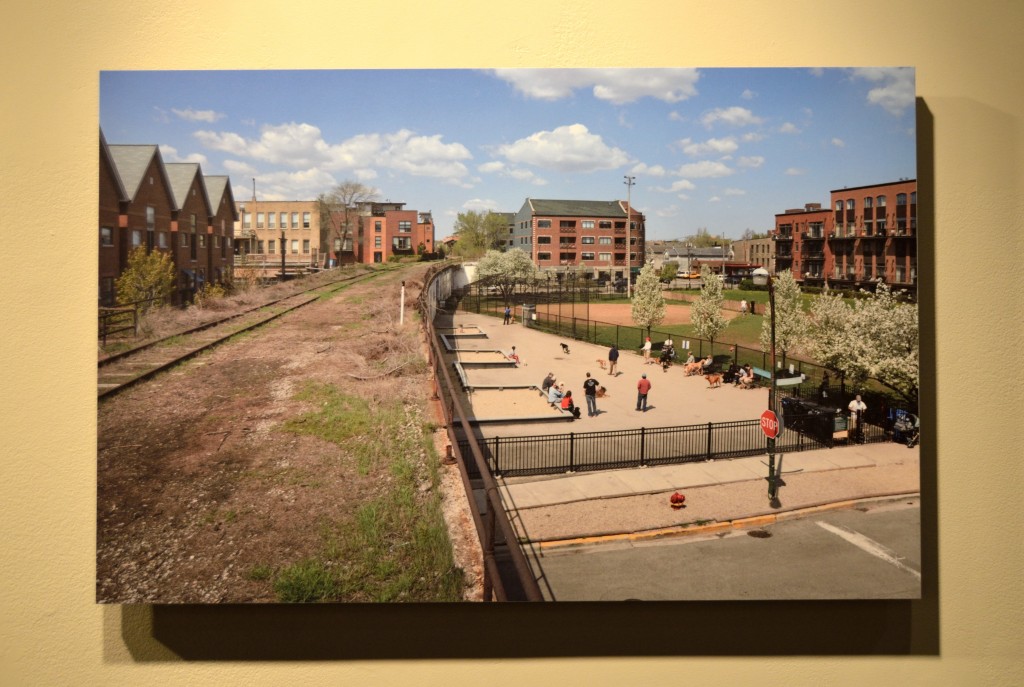 One of the most inspired recent additions to Chicago’s public spaces is The 606, a trail that follows the tracks of the once-abandoned elevated Bloomingdale train line that runs in a straight line through Humboldt Park, Logan Square, Wicker Park and Bucktown. To be on the trail is to be transported to a world that is apart from and above the city, yet is immersed in it, as the tops of buildings at times form walls on both sides. The experience is invigorating and empowering, especially because the line has been left in a partly rough state. It is a place where people can jog, stroll and walk down to several ground-level parks that dot the route.

In his clean and very slightly muted, medium-format color photographs of the trail, David Schalliol evokes a meditative mood. Although his images are varied by their degree of elevation above the tracks, the points of the route where they were shot and the seasons and times of day they were taken, they share the same perspective of looking down the path into the vanishing horizon, inviting a moment of reflection before proceeding onward. The show’s banner image is the only large photo, a mural-size panorama shot at dusk and englobing both sides of the tracks including a graffiti-laden fence; a bridge arching upwards; burning points of light in the distance; lines of apartment buildings and rough gravel, weeds and rails at the center. The vision that we see here is not one that we could ever glimpse, much less hold, with our naked eyes. The scene envelopes us and we are drawn inside it, so that we lose sight of our surroundings in the gallery. The smaller images are appealing and sensitively composed, but they are less successful than the photo-mural because they force us to look at the scene from a dominating distance rather than being beckoned to dwell within it. Yet they generate their own sense of place, as we look down on the elevated trail from even higher ground, monarchs of what we survey. (Michael Weinstein)