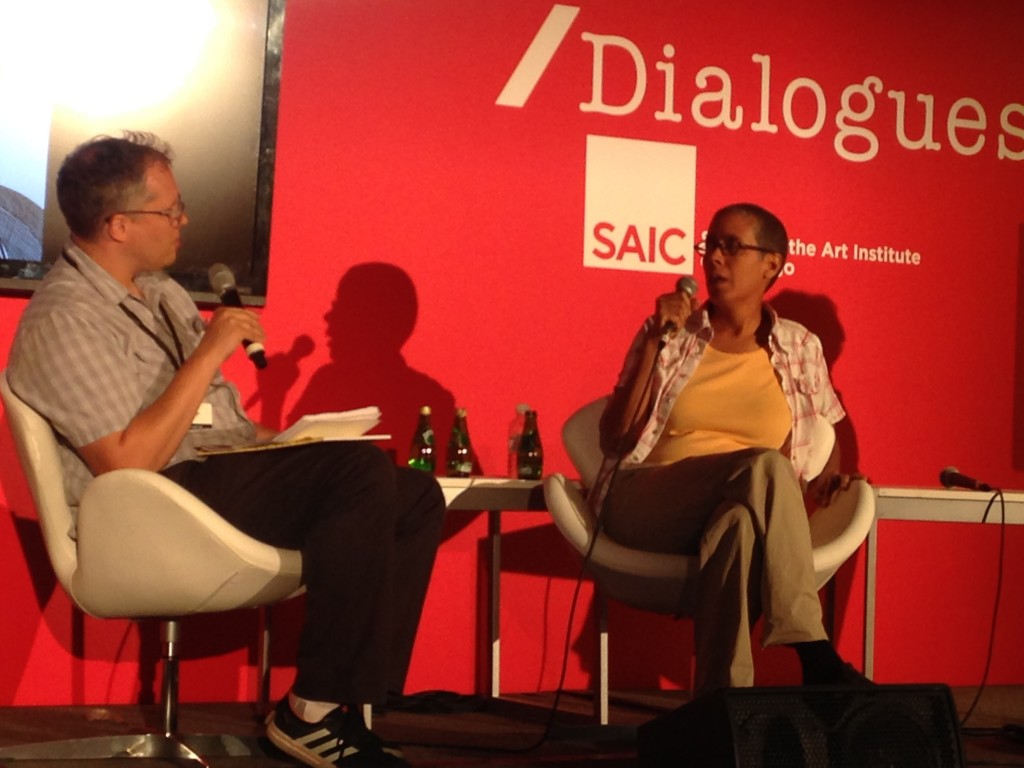 Duncan MacKenzie and Laylah Ali in conversation at EXPO Chicago, 2015.

If anyone was awake and on-time for the kickoff of EXPO Chicago’s /Dialogues series at the rough hour of 11:30am this Friday morning, they were likely not on the VIP party boat last night. And if you missed both, you suffered no great loss. The first conversation in the /Dialogues series was on collecting, an appropriate if not popularly engaging topic for an art world gathering that is centered on art commerce. Given all the attention paid to on-site installations, special projects and performances, and curated sub-exhibitions by museums and nonprofits, one can easily forget that EXPO is, after all, one big art market. Setting aside the question of tokenism, these extensions make the fair well worth visiting for the average visitor (read: non-collector).

The second conversation in the series was truer to form, a “one-on-one” between Bad At Sports’ Duncan MacKenzie and artists Laylah Ali and Nancy Lupo. The trio was joined at the last minute by Richard Holland, who with MacKenzie founded Chicago’s beloved art blog and podcast. Awkwardly conceived as separate interviews of each artist, the conversation nonetheless raised pertinent questions about the very role talking plays in art world discourse. In between observations on the relationships between form and materials, texture and pattern, and audience perception versus artistic intention, the artists and their critics performed the strange ritual of talking about things—art objects, that is—that are largely assumed to “speak” for themselves by their very presence.

In the interview-cum-conversation, this apparent hypocrisy between words and form played out in unexpected and amusing ways. After remarking that the flatscreen displaying images of her works washed out their color and darkness, Ali observed that the talk might have been better on the radio, where description alone would have to suffice for images that could not fully represent the absent artwork. Of course, veteran consumers of Chicago art criticism will know that Bad At Sports produces a prolific podcast series, so Ali’s comment was spot on. When Holland asked Lupo if she considered her work to respond to the old debate around art versus craft, she replied bluntly “No, I am not interested in that conversation,” before launching into a more generous response that showed, in fact, that she did consider the issue, just not in the terms offered by her interviewer. These hiccups and stumbles are familiar to anyone who has done studio visits or even just ventured to ask the question, “So, what do you make?” Awkward as they are, they are necessary efforts that make great strides to bring down the barriers that seem to separate contemporary art from ordinary life.

Language plays a crucial role in communicating the meaning of a work of art, and even the most militant arguments for art’s autonomy cannot dispense with the very words that convey these dogmatic beliefs. As we learned from MacKenzie’s and Holland’s probes, meaning for Lupo is tied to the process of making, or how the artist herself creates form from gathered materials, many of which are readymade things she alters and reassembles. For Ali, whose comic-inspired gouache paintings offer open-ended situations between mysterious, human-like characters, meaning emerges in the mind of the viewer, who will enter the work with an excess of narratives to lay down on the ambiguous void the artist has opened with her images. Neither perspective is more or less valid than the other, nor are they mutually exclusive. But for the more casual visitors to the city’s one and only international art fair, these discrepancies and disagreements can seem much more welcoming when they arise in a conversation with a maker, instead of in the solitude of the anxious mind trying to make sense of art’s many and inherent contradictions, all the while roaming the busy art fair. (Elliot J. Reichert)