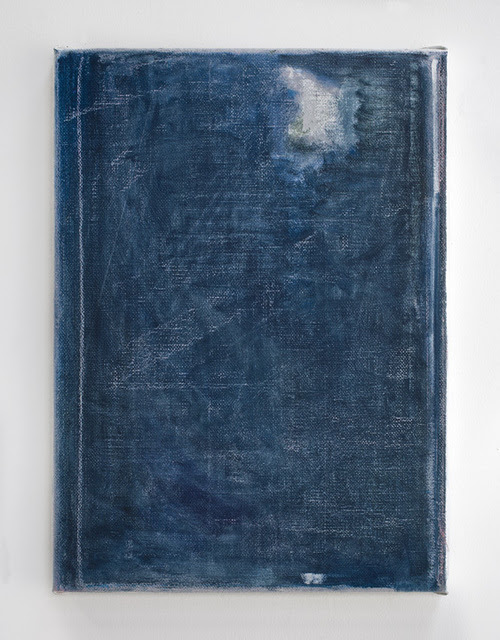 1. John Zurier at Anglim Gilbert Gallery/Booth #416
Possessed of an emotional depth lacking in much of the glitz and glamour at this year’s fair, these three deeply hued but modestly sized works are understated and serene. Berkeley-based artist John Zurier’s work is heir to the expansive space of both Richard Diebenkorn’s “Ocean Park” series as well as Matisse’s early experiments with Cubism—think “Open Window, Collioure.” Reproductions simply do not do them justice, the luscious satin surface of these monochromatic distemper on linen paintings are a slow read; a welcome respite from the rapidly consumed art-product readily available elsewhere.

2. Hackett | Mill/Booth #740
Since EXPO’s inception, Hackett | Mill has brought a fine selection of artists comprising the core members of the Bay Area Figurative movement. In the mid-fifties, this group of painters, led by the quixotic David Park, broke away from the then-trendy approach of Abstract Expressionism and embraced representational subject matter albeit with an expressive touch. In addition to Park’s beautiful oil-encrusted work “Three Men,” this year Hackett | Mill is also featuring several large-scale collages by the almost forgotten Conrad Marca-Relli; an appropriate connection given the amount of collage on view by contemporary artists this year.3. Keith Sonnier, “The European”/In-Situ #8 Let’s just cut right to it: from Jessica Stockholder to Daniel Buren, many of this year’s IN/SITU and EXPO PROJECTS installations are little more than elaborate lights. Keith Sonnier’s “The European” seems to own that reality without resorting to size or clever gimmicks as a self-justification. An elaborate series of bent and folded neon tubing suspended from the ceiling, the work pays homage to the artist’s roots in the Minimal and Postminimal moments. This relatively unobtrusive work comes across as amiable and effervescent without being childish or falsely naïve, a tough trick to pull off.

4. Galerie Micheline Szwajcer/Booth # 407
Art fairs aren’t a place where you typically see works that kill your buzz—or your desire to spend—but the collaborative works by Jos De Gruyter and Harald Thys at Galerie Micheline Szwajcer are heavy. Featuring a bevy of life-size burlap puppets hung from the booth’s walls, there is something scary and vaguely oppressive about these effigies in everyday clothes whose arrangements and shabby condition seem to suggest the plight of migrants on the move. Conveying an emotional range and profound sense of humanity lacking in a lot of the easy-bake abstraction on offer, these installations are not to be missed.

5. Victoria Gitman at Garth Greenan Gallery/Booth #308
Garth Greenan’s booth may rate as the gutsiest move by a gallery at this year’s EXPO. While most spaces are packed to the gills with stuff that’s gonna look hella-good over that couch in your Gold Coast condo, Garth Greenan’s oversized booth features only three paintings, and they’re tiny at that. The works “On Display” and two untitled works by painter Victoria Gitman are delicate images of purses immaculately painted and surprisingly hold the space. This airy space instantly disperses the fair’s prevailing claustrophobia.