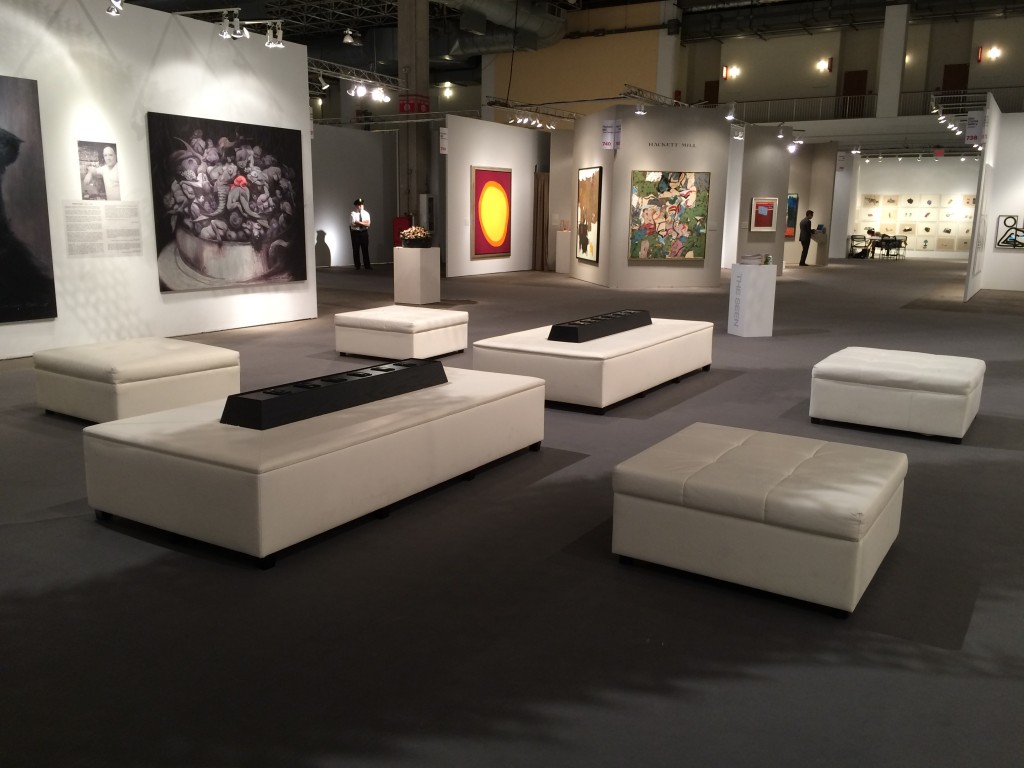 1. Von Lintel Gallery/Booth #302
Von Lintel specializes in the standard mediums of painting, photography and other works on paper, but the art presented is anything but average. The gallery’s artists explore the possibilities of material and method, creating otherworldly images through abstraction and a focus on detail. Edward Burtynsky’s C-print “Colorado River Delta #6, Salinas, Baja, Mexico” (2012) is akin to a hand-drawn map, while Canan Tolon’s painting “Untitled 8.3” (2013) could easily pass as a meticulously structured collage. The booth provides a good mix of artists creating subtle abstractions and visual surprises that are worth a longer look.

2. Hunter Reynolds. “Survival AIDS–Act-Up Chicago–A Revolution,” 2015/EXPO Projects
For this site-specific installation, Hunter Reynolds has created a wall-sized, stitched photo installation of Chicago news clippings, images of himself as his alter ego Patina du Prey or his body tightly wrapped in colored tape for a mummification performance, as well as stories reflecting on his life and work as an HIV-positive gay man. The news clippings tell of the criminalization of HIV-positive people and related stories focusing on HIV-positive women. They illuminate connections between the historical work of groups like Act-Up and link to current social issues. Fear and hostility toward HIV-positive people remain, even as research brings greater understanding of the disease. Reynolds’ walk through history serves as a stark reminder that despite advances in medical science and social norms, the AIDS crisis is not over.

3. Sung Jang. “MOBI,” 2015/In-Situ #6
Sung Jang’s “MOBI” is an incredible creation of injection-molded plastic stacked in succession to create surfaces and shapes: seats, perches, dimples and resting places. Each module contains three s-curved shapes joined in the middle to evenly distribute weight and support people who are invited to sit on the forms. Crowds relaxed and lounged comfortably on “MOBI” as if plopping down on a traditional bench.

4. Pavel Zoubok Gallery/Booth #413
Art fairs can be overly serious affairs, so it’s  especially gratifying to be reminded of the beauty or pleasure art objects can inspire. For nearly twenty years, Pavel Zoubok has focused on artists making mixed media work installation, collage and assemblage to create a historical and market context for these forms. Artists such as John Evans, Lisa Hoke and Joe Brainard (sorry; no Nancy cartoon drawings) have works on view that are quirky, funny, charming and cute, but the inclusion of prolific Czech poet, translator and visual artist Jirí Kolár is a real treat. The whimsy of Kolár’s intricate and complex collages often belies an underlying anti-Communist politic, but all with humor, as a good reminder that even in the midst of crisis, we should lighten up. 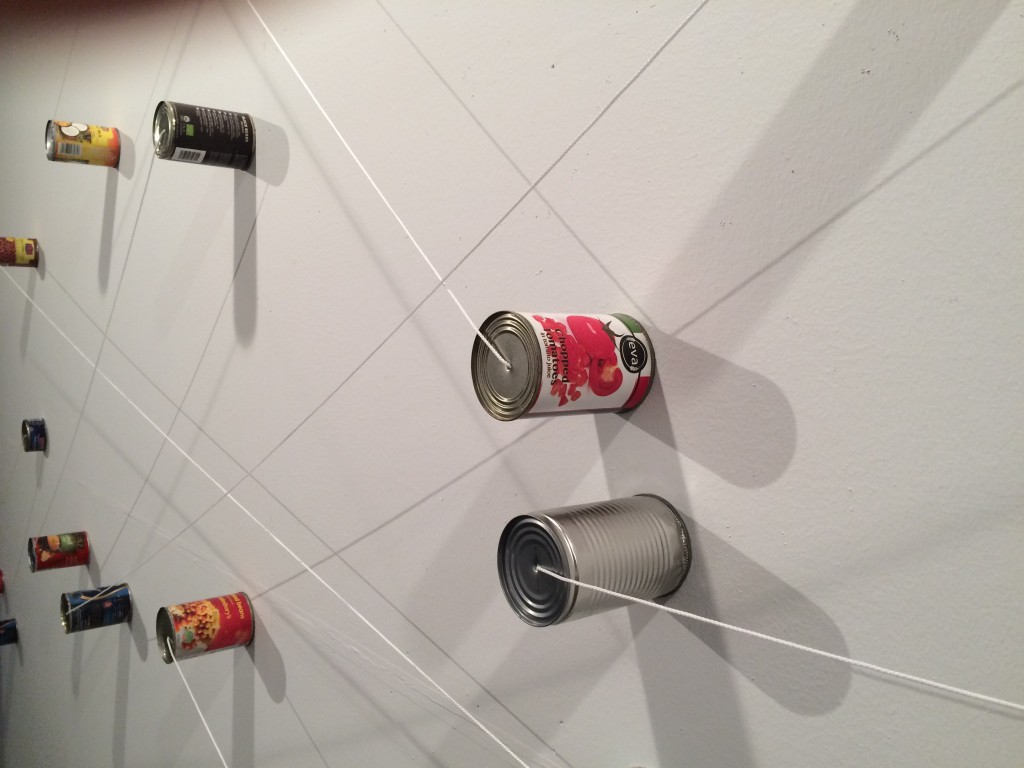 5. Amalia Pica. “If These Walls Could Talk,” 2010/EXPO Projects
Amalia Pica’s tin-can listening devices use empty food containers and string to make comment on exclusion and inclusion, community and communication. In her work, Pica deals with communication gaps and mixed signals, wondering if art can indeed be a form of communication. In previous installations, “If These Walls Could Talk” employed two walls of cans joined by taut webs of string, emphasizing the gaps in connection, but here, the cans connect on a single plane. While visitors are not forced to navigate a tin-can-telephone-maze as they are in other versions of this piece, they will surely be mesmerized by the installation.

6. Matthias Bitzer. “drip(II), drip(III), drip(IV),” 2014/In-Situ #1
Matthias Bitzer’s light sculptures are subtle yet affecting. Fluorescent tubes are suspended from the ceiling using a seemingly simple weighted pulley system. The light reflecting off of the white wall behind appears less harsh than one might normally expect from fluorescents, so it might be easy to walk by and miss this installation. Bitzer’s interests lie in blurring traditional notions of form and content, mixing things up by slipping in a literary influence here and there and appealing to multiple aesthetic sensibilities all at once. The “drip” sculptures are deceptively simple, but spend a little time with them so that their charm is revealed.