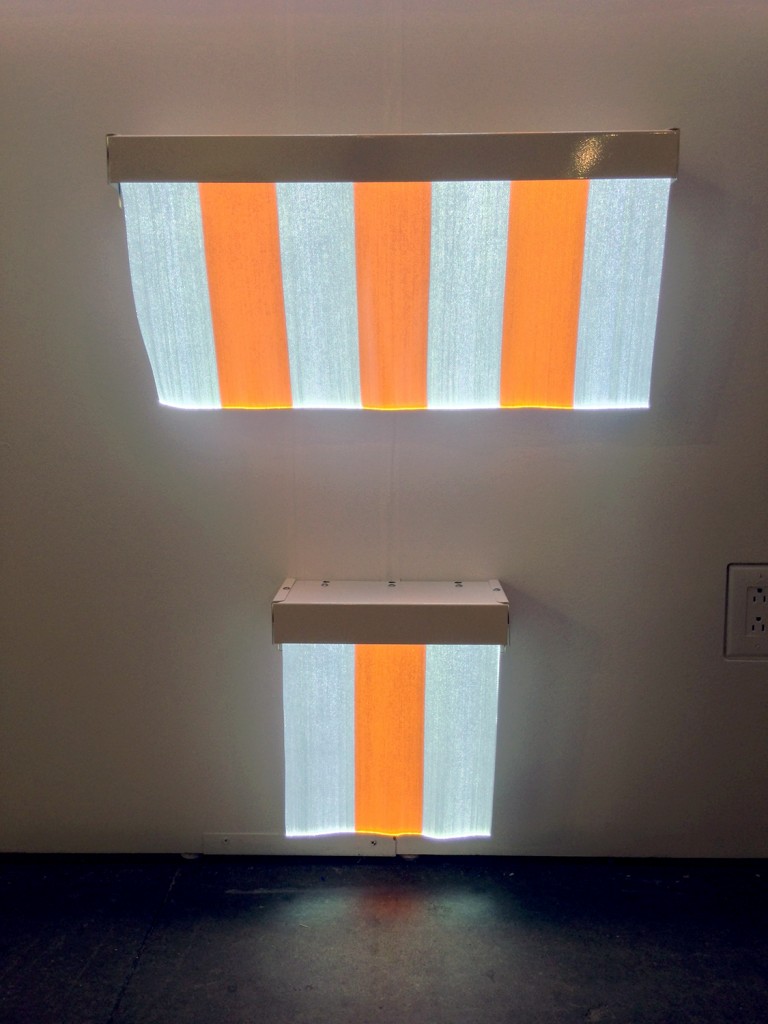 When I find myself cringing at the brutalizing means of display paintings suffer at expansive art fairs like EXPO, I have to remind myself that what we call “salon style” hanging of artworks recalls the crammed walls of the Salon de Paris of yesteryear. Or think of Jean-Antoine Watteau’s “L’Enseigne de Gersaint,” 1720-1721, when a well-dressed group looks at pictures hung edge to edge, and in some places stacked in front of one another. In the centuries since, one could trace painting’s shift toward a defiant posture, one that argues a position of autonomy (or at least the appearance of it) within the bustling arts-and-culture (or do I mean arts-and-entertainment?) spheres in which these canvases circulate.

One notes a couple of different strategies with paintings selected for this year’s fair: a booth like Garth Greenan Gallery (#308) who shows only three, slight and meticulously rendered oil works on panel—one work on each of the booth’s broad white walls. A striking wager, no doubt, to insist on that sort of room around that sort of detailed painting, when so much of the fair depends on gaudy spectacle and the brightest hues in the rosters of artists represented. But in counterpoint are approaches to painting problems—whether painted or not—that account for, react to, comment upon the social and physical contexts in which they are located?

At EXPO Chicago 2015, we will call this the Buren Effect. The French conceptual artist Daniel Buren has, since the early 1960s, developed continually inventive and sly means of bringing formal languages from painting (pattern, color, surface, scale) in reaction to the institutions that populate the field of art. In the mid-sixties, he worked with the collective BMPT (along with Olivier Mosset, Michel Parmentier and Niele Toroni) to deconstruct painting to its most reducible parts, thereby incorporating one of the most venerable and long-heroicized mediums into the turn toward Conceptualism in that era. Buren in particular is synonymous with a mode of using painting as installation. 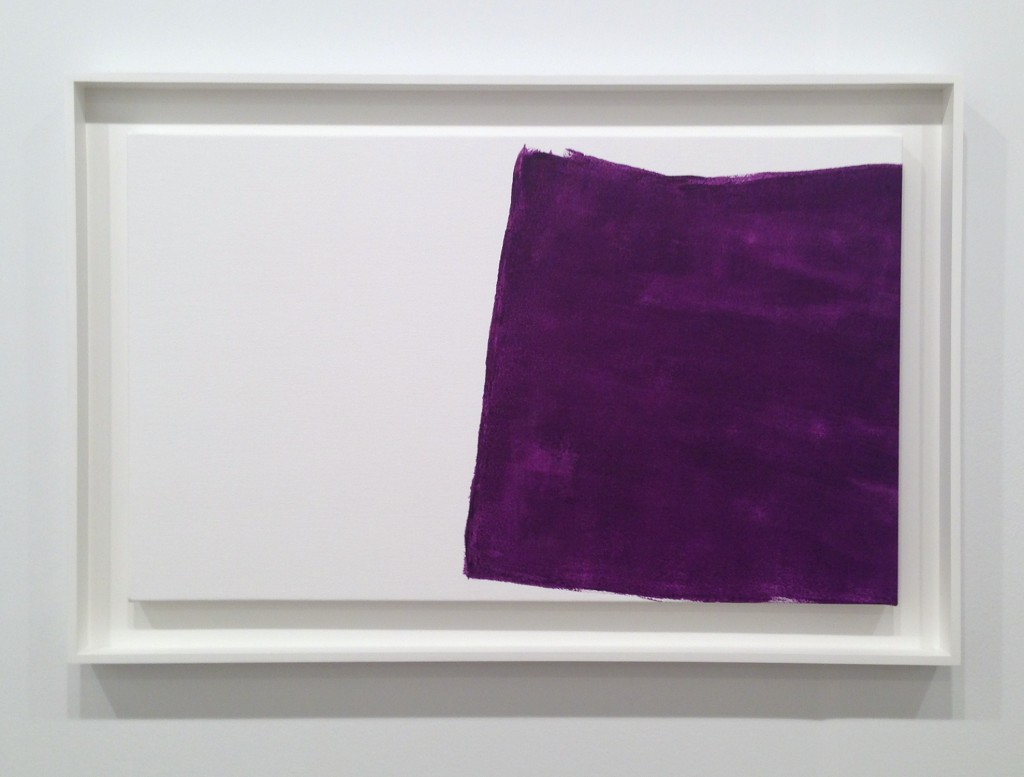 Buren can be found throughout this year’s EXPO, and this afternoon he’ll participate in a discussion at 2:30pm in the Dialogues section of the fair. Joined by Nicolas Cattelain, Felice Varini and Matthieu Poirier, they will talk through “Leaving the Canvas: Abstract Art and Architecture.” Looming centrally above the fair is his 2006 work “From three windows, 5 colours for 252 places,” a grid-based installation hung from the ceiling, comprised of stained glass-like Perspex panels in deep gem tones. The work was first made for the Museum of Modern Art Oxford in 2006, and I haven’t decided if presenting an ostensibly site-specific project in a random, new architectural context can speak cogently about issues of dislocation or crises between local and global scopes for art exchange.

I also can’t decide if I should be convinced by the “bells and whistles”—well, actually, dazzling light work and cutting-edge technology—that characterize Buren’s several 2011 and 2012 pieces in woven fiberoptics, with vibrant LED lights filling the striped sheets in a spectral spectacle that punctuate the fair in several sites. At least to my eye, these works avoid gimmick through satisfying a phenomenological encounter with light, color, and surface that I can’t easily compare to any other experience. Buren continues to take issues from painting into strange, new places.

These projects at EXPO mark a return for Buren to Chicago’s art culture that has welcomed him to develop important works here over decades: a site specific installation in 1977 at the Art Institute of Chicago, a solo exhibition at the Renaissance Society in 1983, a solo exhibition in 2006 at the Arts Club of Chicago, and perhaps his most well-known Chicago intervention from 1980-1982 when he installed “Watch the doors, please!,” vinyl panels in five colors adhered to the exterior of train doors on the Illinois Central Gulf Railroad of the South Suburban Mass Transit District in Chicago (this latter work is currently included in Sean Snyder’s research-driven works on view at Document in the West Loop). 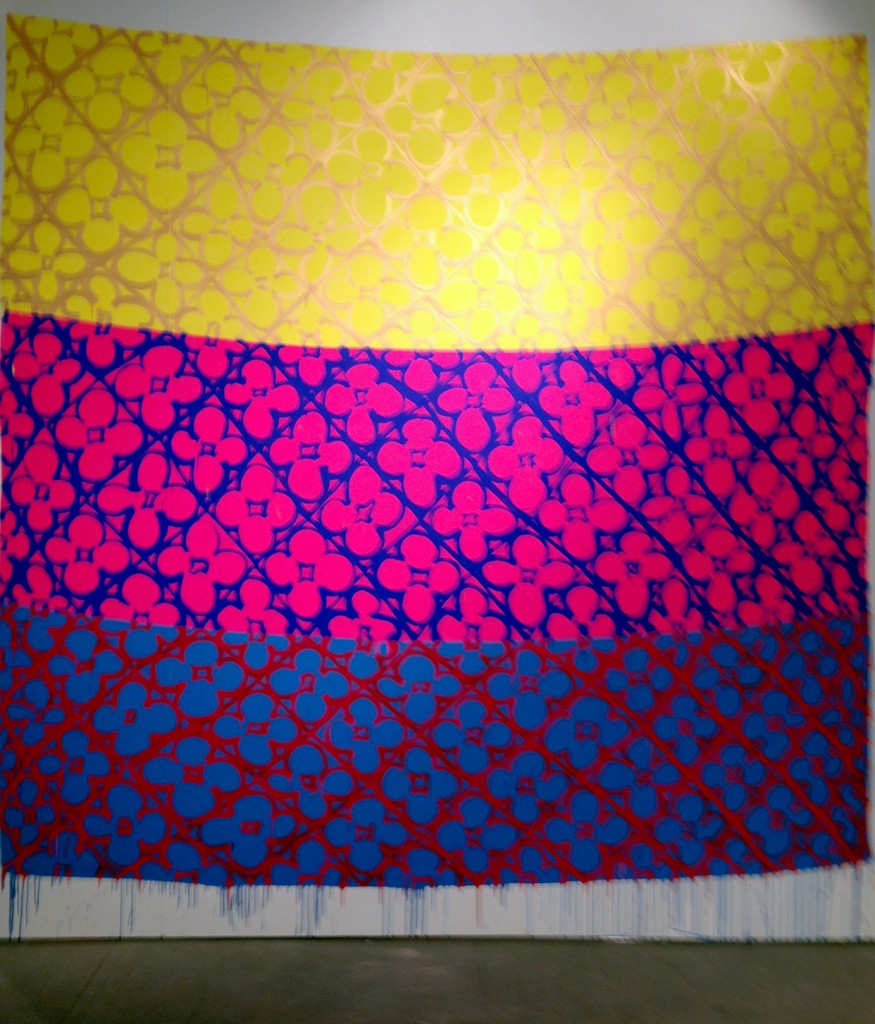 With the frequency of Buren’s works appearing in Chicago, one could venture he is a godparent of what the Museum of Contemporary Art called “Chicago Conceptual Abstraction” in an exhibition in 2013. Spanning a generation or so, this loosely defined movement brings deconstructive inquiries into painting and object making that question their mediums as well as philosophical and social issues that may be brought to bear on the work. Think of Julia Fish, Richard Rezac, Judy Ledgerwood, Michelle Grabner, David Schutter, Gaylen Gerber and others. In the case of Gerber, his relationship to Buren is rendered in multiple projects including his 2013 MCA exhibition, which include salvaged components of Buren’s Arts Club installation. Most of these artists are well represented at EXPO this year, with Rhona Hoffman Gallery (#311) committing much of their booth’s space to conceptual issues of painting. The front wall of Hoffman’s booth is emblazoned with Judy Ledgerwood’s most recent wall painting in acrylic and tempera, “Chromatic Patterns for RHG, Expo 2015.” Alongside her often extravagantly large canvases, Ledgerwood’s works on walls carry a reflexivity similar to Buren’s toward the institution on which it’s painted.

Beyond Chicago’s dealings with conceptual abstract painting, this year’s fair is full of variations on monochrome paintings, which as I noted in an essay earlier this year, is presently enjoying its centennial. Nate Young’s graphite on paper and attentively crafted wood framing device is a quiet, powerful presence in moniquemeloche’s booth (#203). Nearby, Brooke Kanther’s pieced together soap-and-cowhide panel lays in repose on the concrete floor of SAIC’s booth (#100), part of an intense installation of works curated by Kori Newkirk that explores themes of abjection and cleansing. In contrast, Imi Knoebel’s hulking panel at White Cube (#505) tempers gentle, post-minimal formalism with a reflective impassivity. Two paintings by Anne Truitt at Matthew Marks (#517) epitomize a cool balance of personable handling of her medium and formal detachment.

Two newcomers to the fair brought painters worth noting. The gallery Flowers (#741) shows an overview of the London painter Richard Smith’s career—a masterfully developed language of vibrant color, patterns and systems, and idiosyncratic supports. The selections of works by Maria Morganti in the Milanese OTTO ZOO (#716) are somewhat uneven, as her oil works and the clothesline of stained sea sponges used to make those paintings overemphasize her production methods in the booth’s installation. Morganti’s smaller “Stratificazione” works in plasticine on wood panel are much more exciting: gummy monochromes layered in uncomfortably artificial hues that are intended to be shown either on the wall or laying flat on their backs. This open-ended contingency for display shifts where in the process of the work we are meant to pay attention and then become involved directly. Very much in keeping with Buren’s means of getting painting to comment on space and our decisions about it, Morganti’s plasticine works are the pieces at the fair I’d take home with me if I could.