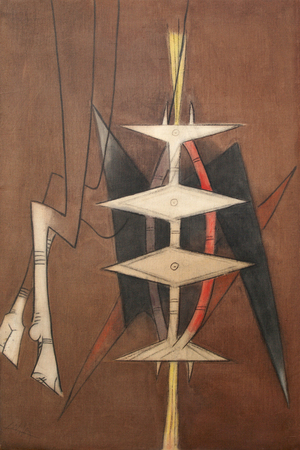 It was still possible in 1956, the year I was born, to produce pictures based on moral conviction. Johns and Rauschenberg were little known, Warhol was a successful designer (and that’s all), and Lichtenstein was teaching at Ohio State University. Irony was a minority rhetoric, and the most ambitious art aspired, as Rothko said, to the condition of the “tragic and timeless.” It wasn’t that the Abstract Expressionists represented fraught subjects but that they painted as if the fate of mankind hinged on their every brush stroke.

There were dozens of other artists nearly as achieved as Rothko, de Kooning, Pollock, Newman, Kline and Motherwell, who never gained the same renown. Many of them happened to be on exhibition in EXPO Chicago this year. Their names are evocative of the rich, immigrant mix of New York from the 1930s to sixties and the legacy of European modernism: Robert Natkin, Michael Goldberg, Hans Burkhardt, Friedel Dzubas, Theodoros Stamos, Conrad Marca-Relli, Louis Guglielmi, Perle Fine and others. Goldberg’s “Bourgeois Still Life” (1955) at Hollis Taggart is a big, blowsy, de Kooningesque affair that straddles abstraction and representation: a round volume with spokes at upper left, a cylinder at upper right and a footed bowl at lower right are broadly painted in undiluted swathes of yellow, blue, orange, red and black. They hover above an unevenly painted white field which itself advances from an unpainted border. It’s quite a picture.

At Cernuda Arte are three works by the Cuban Wifredo Lam, an artist who never lived in New York, but whose best-known painting “The Jungle“ (1942) has been a loadstone at MOMA almost since it was made. Lam’s best work invokes the legacies of Picasso, Miro, Matisse and Tanguy but with notes of santeria and tropicalismo. In “Totem” (1951), the armature that holds up the ladder in the center (its rungs have evil eyes), is made of sugar cane. At the left dangle a pair of skinny, hooved cattle legs. In the mural-sized “Untitled–[Arcane Dreams]” (1955), stylized birds plummet like jet bombers on either side of a pair of black lozenges like wounds in the spongy, earth-brown canvas field. Was Lam imagining US bombers from the recently concluded Korean War or just the dive of the Petrels he saw during his walks along the Malecón in Havana? “My painting is an act of decolonization,” he said, an expression of personal and political liberation. (Stephen F. Eisenman)