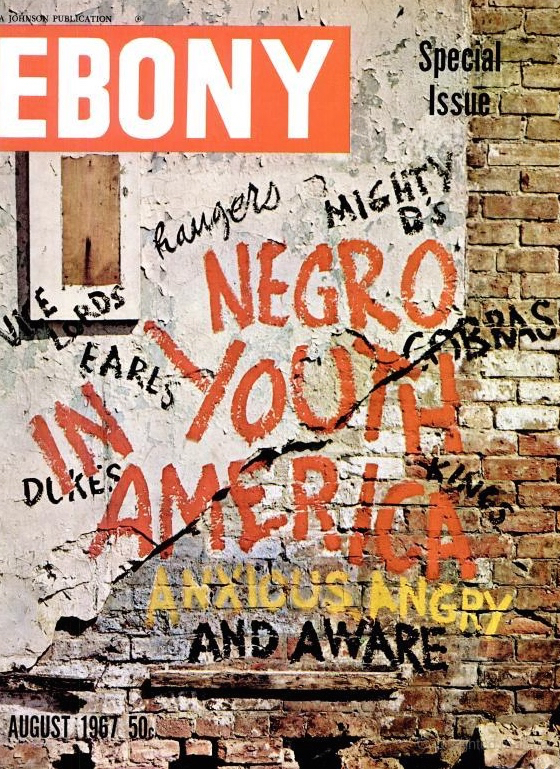 In 1967, a group of students from Hyde Park High School performed a musical piece called “Opportunity Please Knock” together with members of the Blackstone Rangers gang. Ebony featured the production in a glossy spread. More Rangers ran a show from the University of Chicago’s student radio station. Johnson Publishing Company, who put out Ebony and Jet and other periodicals of middle-class black life, recently gifted their founder’s office library to South Side artist (and director of the university’s Arts + Public Life initiative) Theaster Gates. Gates’ first solo show took place at Hyde Park Art Center in 2007. There’s a density here, a tangle of stories that start to sum up art’s place on the South Side. This is where the 1893 Columbian Exposition set up shop, littering Hyde Park with leftover buildings and sculptures. A Japanese garden. When racist neighbors forced Katherine Dunham’s dance studio out of downtown in 1927, she took over a former World’s Fair concession stand on 57th Street.

According to the City of Chicago, Hyde Park runs from 51st Street to the Midway. It is bounded by Washington Park on the west and Lake Michigan on the east. To give a proper accounting of the neighborhood’s art scene however, to make sense of that density of art and history, you have to look further afield. North to the South Side Community Art Center in Bronzeville. West to the Arts Incubator on Garfield Boulevard and the DuSable Museum. East to the Lakefront itself, where museums abut the legacy of the 1967 “On the Beach” performances. South to Dorchester Projects and Black Cinema House. For if Hyde Park has long hosted a constellation of institutionally sanctioned art spaces, it also has a history of experimentation that embeds it in the ramifying spheres of South Side art. To really understand both legacies, you have to wrestle with the neighborhood’s complex racial politics, as well as the oft-discomfiting efforts by the University of Chicago to engage such politics. (Full disclosure: I’m a happy PhD student at the university.) 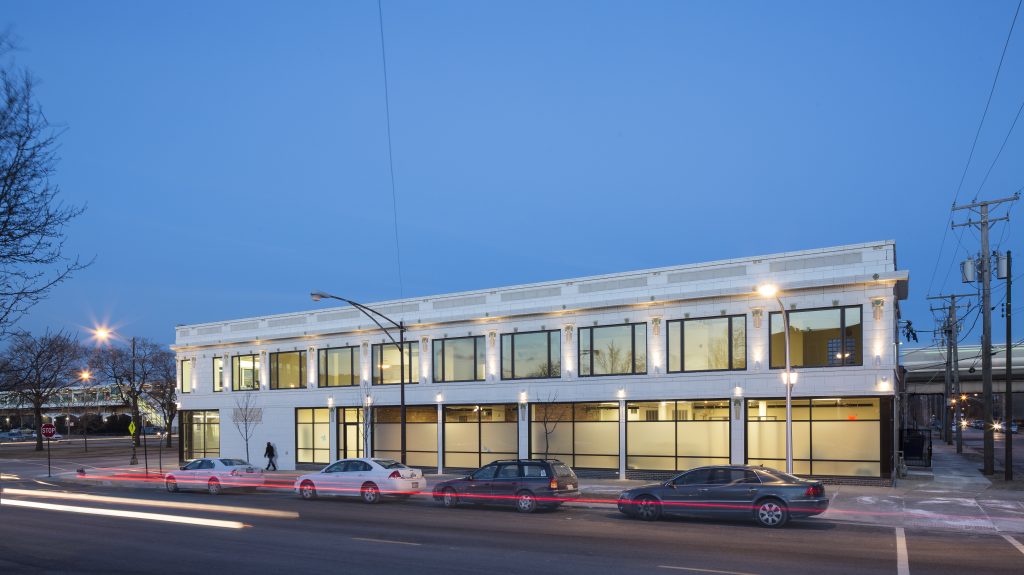 These days, Theaster Gates—you may know him from TED talks and The New Yorker—is the omphalos around which the Hyde Park art world turns. Writing in ArtForum, Huey Copeland called him (not unkindly) a corporate enterprise. He’s spun off new entities : Place Lab tilts at urban transformation in Gary and Akron, Rebuild Foundation oversees the much-discussed Dorchester Projects, and the Stony Island Arts Bank is slated to open in October. His high-profile art lends the university an imprimatur of community activism (trauma centers be damned) and snags Rahm’s attention (the mayor’s brother is an avid Gates collector, and the city sold him the Stony Island property for a dollar). It’s also some of the most intriguing work you’ll see in Chicago, and has reinvigorated a series of art world conversations about the aesthetics of industry and shelter.

More art flourishes under Henry Cobb’s dreamy spires themselves. Much extra university cash has flowed to the arts of late, with new ventures sprouting at dizzying speed. Gripes first: such support belies some curious blind spots. If the administration has pumped capital into new buildings and curatorial positions, it’s neglected to do the same for its MFA students. The graduate program in the visual arts still declines to fully fund its charges unlike, say, Northwestern up the lake.

Instead, you get to browse a first-class patchwork of galleries and museums. There’s the Oriental Institute, squirreled between Rockefeller Chapel and the new economics building. Suitably, it houses an outstanding collection of loot. It overlooks the Robie House, one of Frank Lloyd Wright’s finest homes. The furniture is owned by the Smart Museum on Greenwood Avenue, which boasts a decent collection, a pretty good Rothko, and a series of rotating large-scale installations in its lobby and courtyard. A bonus: you’ll see the leading lights of the art and art historical worlds taking (Illy) coffee there.

Across the quad from the OI, the Renaissance Society fills the north end of Cobb Hall’s fourth floor. It’s been here for a hundred years, and it consistently shows good and smart exhibitions of contemporary work. (If one speaks of contemporary art north of the Midway, one ought to mention Plein Air Café. It serves better than usual coffee-shop art fare.) Moreover, a passel of interdisciplinary entities now lends might and muscle to campus arts programming. The Neubauer Collegium opened its doors in 2012, hosting the Salvage Art Institute to deserved acclaim last year. The Gray Center explores the weird zone where art and science meet. The Object Cultures Project spans multiple disciplines and probes the material. 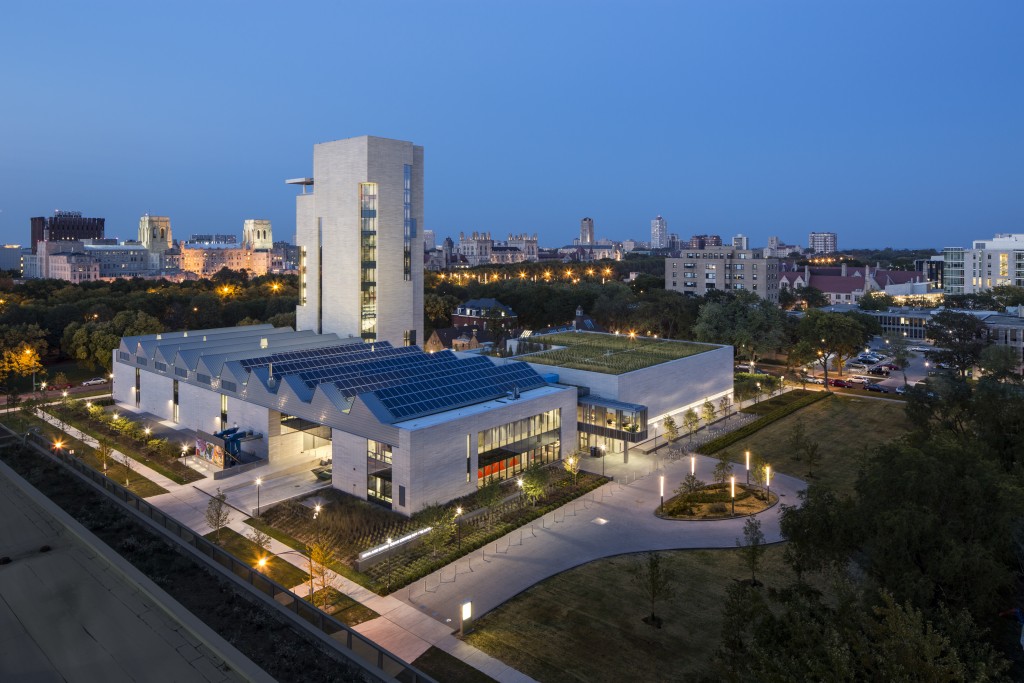 The Reva and David Logan Center for the Arts/Photo: Tom Rossiter

You can’t miss the (relatively) new Logan Arts Center, which lords over the Midway and was featured in a New York Times article pithily entitled “On Elite Campuses, an Arts Race.” It’s the shiny, templar monument to the university’s investment in art. In addition to studios and performance spaces, the building hosts events, screenings, and two MFA thesis exhibitions each year. The ground-floor gallery has recently featured a series of tightly curated shows, notably Hamza Walker’s “Three the Hard Way.”

Although many of Hyde Park’s non-university spaces have disbanded over the years (see: the avant-garde legacy of the 57th Street Art Colony), some endure. Founded in 1939, Hyde Park Art Center shows a heady mix of local artists and international stars. A protean force since its inception, it served as the site for The Hairy Who’s seminal interventions in the late sixties, ran free art classes under the auspices of the WPA and staged some of the earliest recorded Happenings. This is where Chicago teachers learned to make kaleidoscopes in years past. Elsewhere, communitarian platforms Southside Hub of Production and the Experimental Station do valuable work. Finally, South Side Projections, Doc Films, and Gates’ Black Cinema House (density) all offer excellent film opportunities beyond the gentrifying confines of Harper Theater.