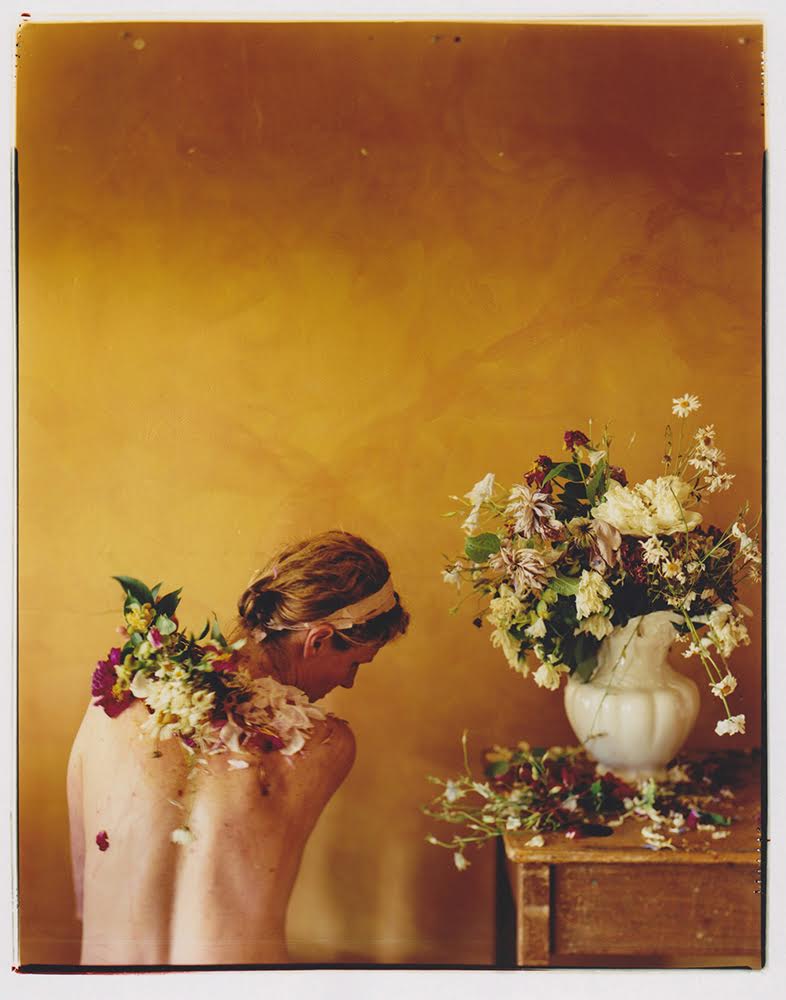 Approaching photographic art as a philosophy of life, curator Adam Holtzman brings together three self-portraitists: Allison Barnes, a twenty-something; Rachel Hulin, who is in her thirties and recently gave birth; and Asia Kepka, who is at mid-life in her forties. His aim is to show how each artist understands herself in visual form at her present “iteration.” For Holtzman, life is a process in which each of us makes and undergoes changes in ourself that retrospectively coalesce into autobiographical periods. In this group show, each body of work is intentionally individualized, so the artists here provide intimate revelations of particular experiences, not generalized reflections on the stages of life.

The most accomplished, rich and resonant series is Kepka’s, which is marked by a cutting wistfulness about the fading of life’s bloom. In her most probing image, we see her nude torso from behind and her head tilted in slight profile. She is wreathed in an unsteady garland of flowers around her neck and a single red rose petal on her back. Her head is bent, and she stands before a vase filled with flowers, petals of which have fallen on the table on which the vase rests. The work is one of profound visual poetry that intensely personalizes one of the great themes of existence.

At the other side of the arc of adulthood, Barnes offers muted black-and-white studies that radiate despondency and uncertainty. In one, she sits in the opening of a shed next to a potted plant, most of which is denuded. Hulin, shooting in lush color befitting the prime of her life, portrays herself as nearly Amazonian in her head shot, and glorying in the life of her baby in the others. In the next room of the shared gallery space, Manifold presents Polly Yates’ collection of found, vintage black-and-white snapshots in which she has effaced the subjects, rendering them ghostlike. The show goes on with new players. (Michael Weinstein)