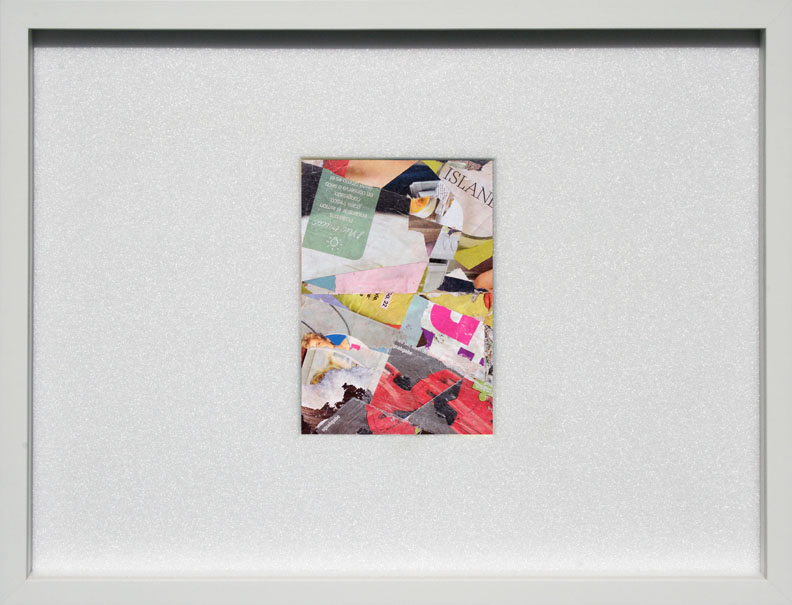 Like many historic artists, Florian Baudrexel seems less concerned with presenting new or personal visions than with outperforming his rivals, packing more wallop per square inch than other artists who cut and paste printed material. Expecting his work to be the same scale as similar graphic collages in this gallery’s recent Albert Oehlen show, I could not at first find his miniatures on the gallery wall. Recalling the highly detailed woodcuts of Albrecht Dürer, Baudrexel is certainly not the first German artist to fit a lot of energy into a very small space.

Although small, the pieces feel as large and three-dimensional as the room-sized installations that the artist has shown elsewhere. They resemble peaceful villages hit by tsunami, where the highly ordered orthogonals of human construction have been pushed into more natural patterns by the overwhelming power of nature. There is not a hint of human ambivalence or self-awareness.

I wish these pieces were larger. I would like to be immersed in all that tectonic violence and beauty rather than straining my eyes to follow it. I also wish that his dramatic graphics might tell a story, as historical miniature paintings often have. The only story here seems to be the chaotic but productive, amoral but enticing contemporary world of commerce and industry, thin-sliced fragments of which have been meticulously pieced together. It builds and destroys with no apparent concern for human consequences.

The harsh, angled dynamics of Constructivism and Futurism immediately come to mind, but Baudrexel seems to have stepped back from the enthusiasm that early twentieth-century artists expressed for the modern world. He encourages this remove by setting his designs into panels of cheap Styrofoam, that indestructible material that is threatening to turn the world’s oceans from blue to white. In this setting, its dull surface does seem to enhance the brilliant, lively images they frame. Impersonal fragments of the commercial world are available to be aestheticized, just as the natural shapes of flora and fauna were once carefully arranged by earlier generations of artists. (Chris Miller)

Through October 17 at Corbett vs. Dempsey, 1120 North Ashland