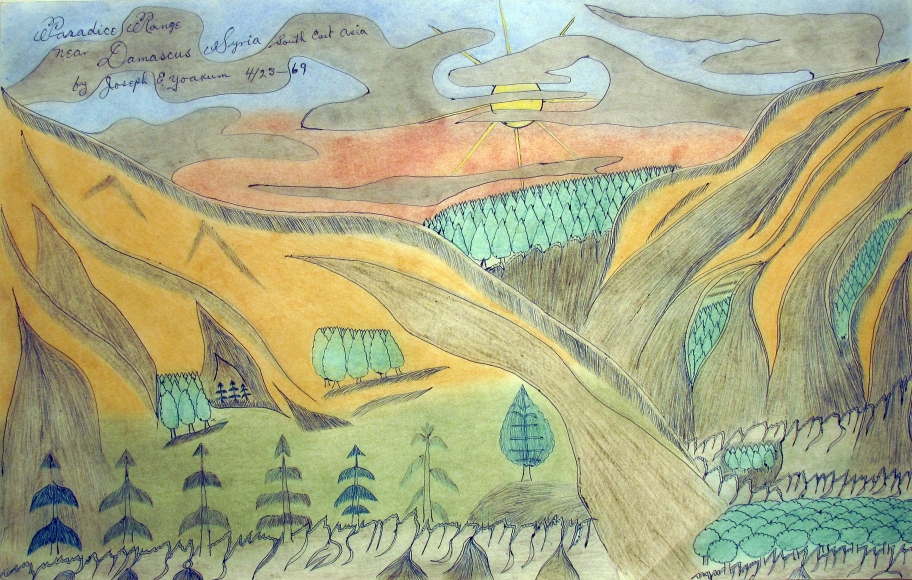 Yoakum began making art at the age of seventy-six, when God told him to pick up a pen and begin drawing. Living on Chicago’s South Side, he made some two-thousand works before his death in 1972. Yoakum described his art as examples of “a spiritual unfoldment,” but the drawings are also fantastical documents of his real and imagined travel. Their titles name places as varied and far-flung as Siberia, Vermont, Australia, the Ozarks, Mongolia and beyond. The son of an African-American slave, Yoakum was raised in rural Missouri and was proud of his mixed French and Cherokee heritage. As a boy, he ran away to join a circus (eventually becoming personal valet to John Ringling), was a stowaway to Europe, served in the military and later spent time in a Chicago asylum.

Yoakum’s pictures are carefully drawn landscapes—or better, portraits of landforms—colored with watercolor and pastel in muted tones of the full rainbow spectrum. One of his favorite tools was the ballpoint pen, and with it he drew his mountains and buttes in tight, paired lines. Yoakum’s pictures lack figures or manmade structures, and as such they recall old maps and topographical prints. Yoakum wrote the titles and dates directly on them in his schoolroom longhand, giving them the scriptural quality of illuminated manuscripts. Like miniature circus backdrops, Yoakum’s drawings are charmingly earnest, with a delicate touch and the obsessive mark making found in much Outsider art. A Native American love of the land permeates his art.

Yoakum is now considered one of the most important visionary Outsider artists. His art was first shown publicly in the 1960s in diners and shop windows, where it was noticed by the artists of Chicago’s Hairy Who and Imagist groups. Their art is obviously informed by his; Roger Brown likening him to “[Henri] Rousseau in our own back yard.” Yoakum’s drawings thus occupy an influential place in Chicago’s art history. and in as much as Carl Hammer Gallery has shown his works for more than three decades, experiencing them there takes on an historical importance of its own. (Mark Pohlad)