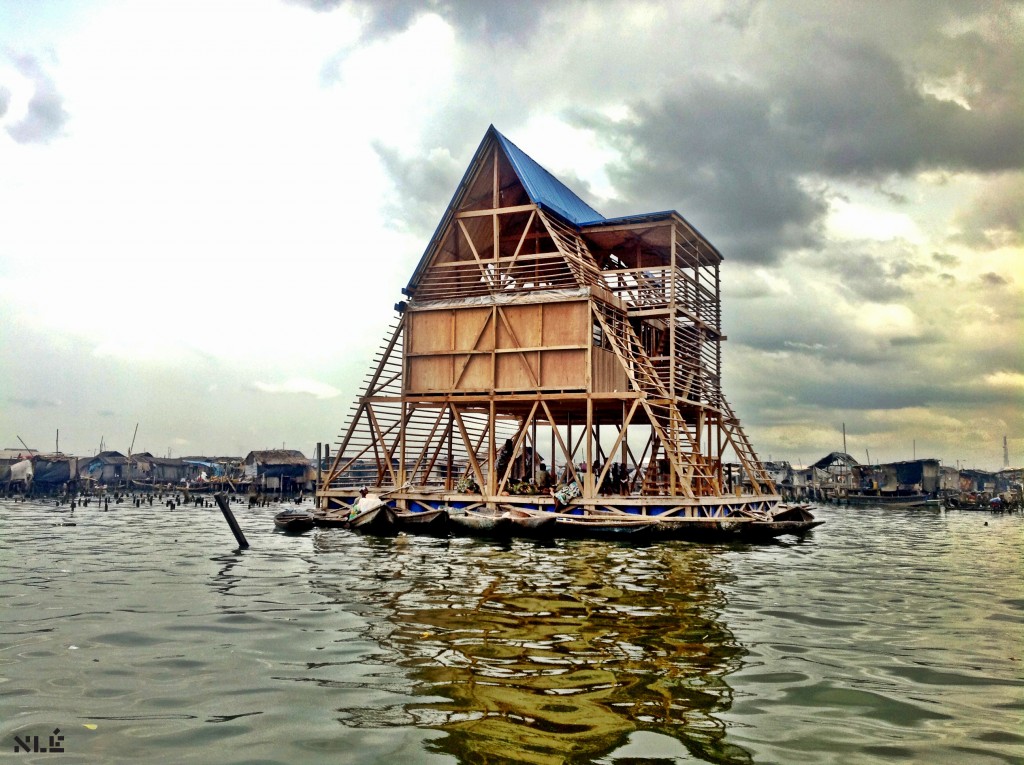 Amid all the hoopla surrounding the inaugural Chicago Architecture Biennial, I will admit that the whole thing makes me a bit nervous. As an art critic, I have some foolish faith that art’s autonomy is the source of its strength, to which the promiscuity of design is inherently anathema. I want to believe that art is outside of the instrumental demands of ‘use value’ and function, and that this freedom affords it the capacity to invent new forms and to anticipate a world that has not yet materialized. Of course, I recognize the great irony in the fact that I imagine art much as a designer or an architect would valorize her practice: as a method of producing new ideas that might help society along toward a better future. Despite this, I want somehow to maintain the autonomy of art, all the while insisting that it is precisely this separateness from function that makes it so useful in the end.

The Chicago Architecture Biennial is beyond such navel-gazing concerns, boldly declaring that utility will drive the demand for new forms. Per its vision statement, it “provides a platform for groundbreaking architectural projects and spatial experiments that demonstrate how creativity and innovation can radically transform our lived experience.” There is no concern for art’s autonomy here, because all creativity—and innovation, its more successful sister—is understood to be in the service of transforming life as we know it. Strictly speaking, this declaration does not discount the transformative power of art, but it does subsume art under the utilitarian banner of making the world a better place. But what is so bad about that? Shouldn’t we all strive for such lofty aims when we create?

I had these questions in mind last week when I attended a lecture by Kunlé Adeyemi, a Nigerian architect, held at the School of the Art Institute of Chicago in partnership with the Architecture Biennial. Adeyemi, who has been commissioned by the Biennial to complete a lakeside pavilion made of local limestone, is an accomplished international designer who is perhaps best known for his “Floating School” in the Makoko settlement community in the Lagos lagoon. Responding to local needs for educational infrastructure and community gathering spaces, Adeyemi’s Floating School is a poster project for the uplifting utility of innovative architecture. Beyond fulfilling immediate needs specific to the community, the project’s most lauded accomplishment was in legitimizing the Makoko lagoon settlement in the eyes of the Nigerian government, which had previously mounted expulsion campaigns to dismantle the ad-hoc arrangement of platform houses built over the water. With the success and international visibility of Adeyemi’s Floating School circulated widely among design enthusiasts and the worldwide news media alike, Nigeria stood to lose a great deal in global goodwill if it were to tear apart this inspiring structure and the floating village around it. And so, good design problem-solved to fill an urgent local need, all the while conforming to the international imperative for good, problem-solving design, which deemed the project—and by extension, the community that required it—as worthy of preserving and promoting.

Ironically, for all its concern with the local, the project’s success was ultimately defined by an international design discourse whose concerns were far removed from local needs. Use value, in this sense of design, is assumed to be a shared, global quality that we can all get behind equally. It is precisely this flattening, universalized rhetoric that can be design’s dangerous seduction. Two years after Adeyemi built his floating school, the images and stories coming from Makoko are little different than they were before his project. Indeed, the day after Adeyemi spoke at SAIC, Nigerian journalist Anu Bialose penned a sad and biting report from Makoko in The Guardian, a Nigerian daily. Titled “The Venice of my Lagos,” her article tells of the settlement’s worsening and still unofficial infrastructure and unsustainable local practices of fuel and food consumption, all taking place in the shadow of a negligent government. She did not mention the Floating School, and her photographs did not exude the enchanting hope that Adeyemi’s talk had the night before. Seeing Makoko through three-years-old press images of the Floating School, we become momentarily blind to the enduring realities faced by the people of Makoko. So often, we forget that the imagineering of brilliant designers and architects does not deliver us automatically to the better world that they imagine. These singular, fantastic prototypes—wonderful as they are—do not scale without the sustained interest and committed will of multitudes of globally conscious and locally active citizens and their governments. 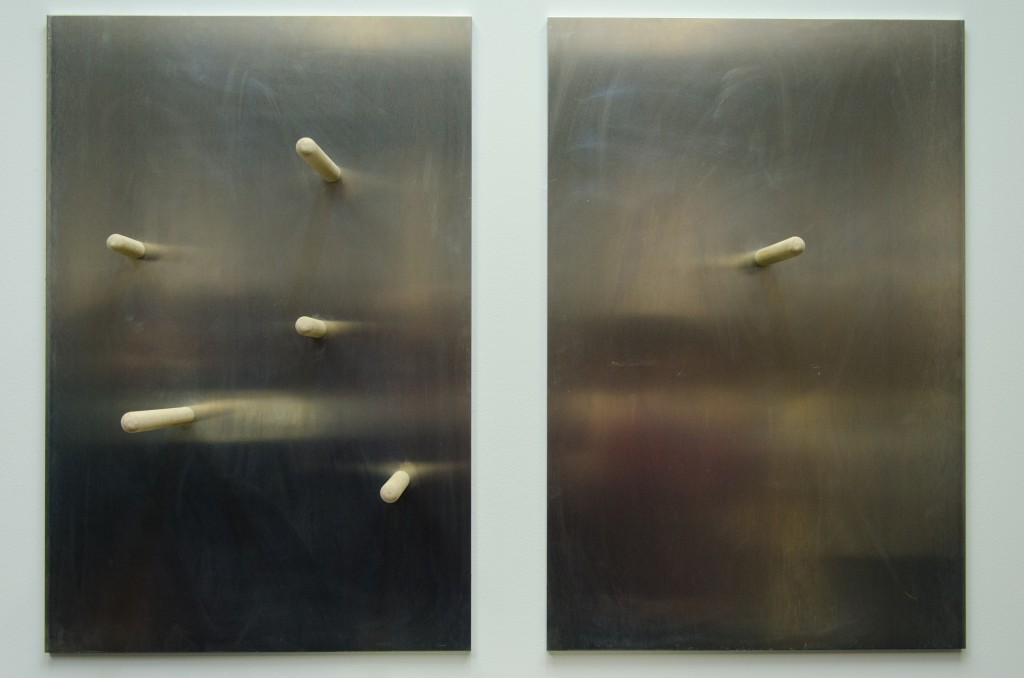 A few blocks away from the Adeyemi lecture, a group exhibition of sculptural work by four Chicago artists has taken place over the course of the first month of the Biennial in the unusual location of a disused jewelry shop in the historic Mallers Building in the middle of Jeweler’s Row on Wabash Avenue. In the heart of the city and yet so far removed from the pageantry of the Biennial, it is tempting to consider “Split Difference” as a kind of Salon des Refusés against the Biennial. Each of the artists—Dan Gunn, Sterling Lawrence, Arianna Petrich and Min Song—present works that refuse the easy commodification of utility. Beautifully designed and expertly crafted, these four sculptures dance at the edge where art meets design, never fully resolving into the latter but seriously questioning their allegiance to the former. It is precisely in the ambiguity of these objects that one locates their freedom. As Samantha Topol—who curated the exhibition under her Original Features collaborative with Benjamin Chaffee—writes in a forthcoming essay for the show: “[T]hese artists are doubling down on the demand that artworks maintain a certain autonomy—autonomy to behave in ways that elude the grasp of the ever-more pressurized, ever-more institutionalized, and ever-more efficient forces of cultural production. That is a system that rewards things that look like things already we know, to which we can readily apply value, and that we can monetize quickly.”

There is a sharp and delightful irony in that the exhibition takes place in a former jewelry shop, a place of making and selling goods that toe the line between pure formal beauty and functional, commodified object. To access the show, one must take the elevator up to the seventh floor of the Mallers Building, passing by a slew of historic jewelry shops, many still functioning, that attest to the long history and popular diffusion of this philosophical debate between design and art. Design, always presenting itself to be just within reach, promises a future that we think we ought to have soon, if not right now. Art, always slightly out of reach, makes us reach to grab hold of that future, whatever it may be.