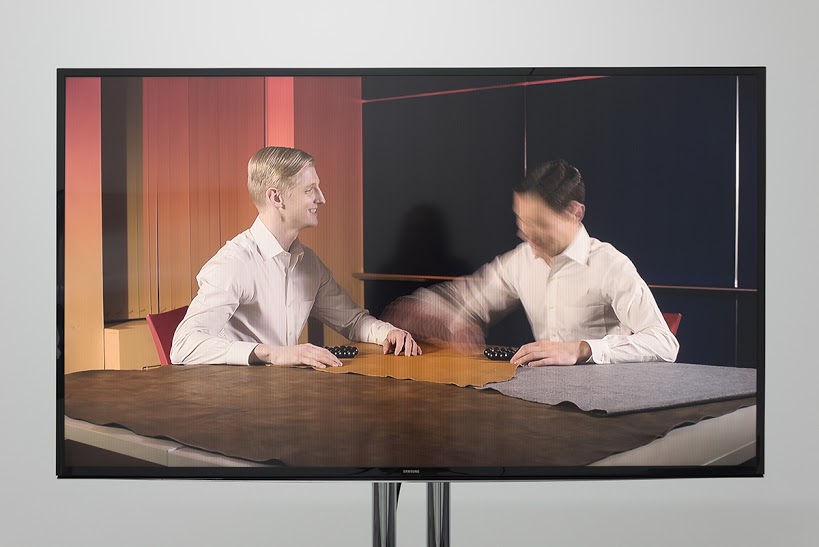 In his first solo museum exhibition, Chicago-based artist Geof Oppenheimer explores the economic and governing forces that regulate the Western world. These forces, which he has dubbed “Big Bosses,” are the foundation of American praxis that manifest in our sociological and physical architecture, inflicting omnipotent pressures. Oppenheimer concludes that these pressures, and our subsequent response to them, ultimately serve as the defining factor of our existence—that ecstasy can only be achieved through internal equilibrium between states of compression and release.

On the lower level of the Block Museum, “DRAMA” purports the “death of capitalism.” Ricocheting between five screens, the video depicts two men, hair perfectly coiffed, flush skin and painted-on smiles, exchanging marbles on a conference room table. At times their perfect faces grow increasingly pixilated and identity is lost. For Oppenheimer, this is the calamitous end of humanity: reciprocity and exchange, the bedrock of humanity, have been reduced to mere performance. Oppenheimer creates a not-too-distant dystopia in “DRAMA,” in which the potential anthropological nightmare he has concocted is palpable, if not a direct critique of the present.

The second half of the exhibition, entitled “Civil/Evil,” reflects Oppenheimer’s sculptural tendencies. The minimalist installation, comprised of two intersecting brutalist cinderblock walls, splits the space into quadrants. Moving between the quarantined spaces, the viewer encounters an image captured from the Hubble space telescope and a bell held in a state of potential energy by a pair of cinderblocks whose existence conflicts with the nature of the walls that surround them. The sheer vastness of the gallery space limits the feeling of entrapment, as one can orbit the installation uninhibited. However, the walls themselves, looming several feet over one’s head, are the physical embodiment of Oppenheimer’s “Big Bosses,” ominous forces whose presence is unnerving and devitalizing. (Noah Hanna)

Through November 30 at the Block Museum, 40 Arts Circle Drive, Evanston