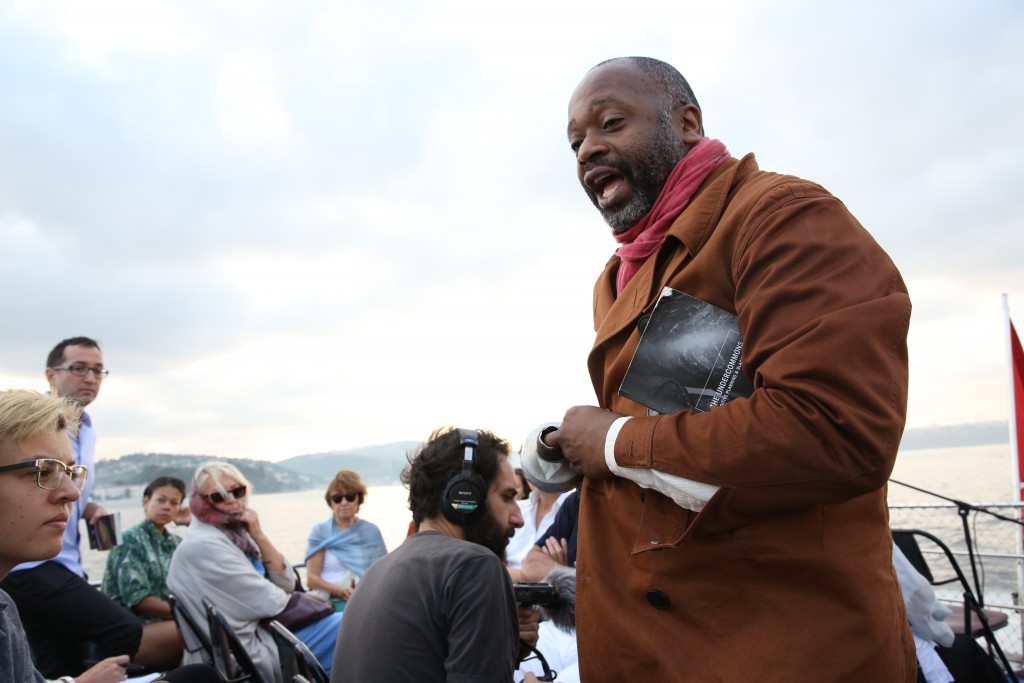 Theaster Gates. “The Anthem of Mu,” 2015.
Performance on the Bosphorus for “Saltwater: A Theory of Thought Forms”/Photo: Mehmet Girgin

“Guglielmo Marconi said every sound we ever make is still out there. Once generated, it fades but never dies away completely.” This idea not only encapsulates the work by Susan Philipsz for which it was written—the work features sounds of dripping water and underwater beacons—but also the 2015 Istanbul Biennial as a whole, which features countless artists and other collaborators, several of which hail from Chicago.

Carolyn Christov-Bakargiev “drafted” this summer’s Biennial in Istanbul, Turkey, called “Saltwater: A Theory of Thought Forms,” a title that suits its location on the Bosphorus, at an ancient crossroads between peoples and cultures. Here, sedimentation occurs; water is not pure; salts and other minerals travel with the knotting currents, carrying a geological essence and an accrued history. Like sediments, objects are archives that store and transmit messages of the past. And like the winding path of the Bosphorus, Christov-Bakargiev’s Biennial is a city-wide, sprawling affair that has you making your way through Istanbul’s bustling streets, in search of these objects and the stories they tell.

In a large, empty, and soon-to-be demolished garage, several speakers discreetly project the sound of clapping. This is “Bir Ritim Mekâni – Otopark (A Room of Rhythms – Otopark),” an installation by Cevdet Erek. The overlaying rhythms are unimposing, but constant. Echoes against the garage walls sound like a tide against land. Erek’s piece felt natural in the space: it belongs to the architecture, to the cityscape; yet its pulse is a reminder of the transience and lifecycle of structures, whether natural or urban.

Elsewhere in the neighborhood, Francis Alÿs’ gorgeous black-and-white film titled “The Silence of Ani,” shows dozens of children playing in the medieval ruins of Ani, a once great Armenian city, ravaged by a history of war and occupations. In the film, local kids hide in the grass and behind rocks and stones, calling to each other with bird whistles. Alÿs’ piece is an elegiac homage to those past inhabitants of Ani, and perhaps also a call to their eventual return.

Chicago has a strong presence with Michael Rakowitz, Theaster Gates, Irena Haiduk and Steve Reinke exhibiting works at this year’s Biennial. A brilliant seminar organized by Northwestern University in collaboration with Koç University also featured other Chicagoans, such as physicist William Irvine of the University of Chicago, mathematician Ezra Getzler and art historian Hannah Feldman of Northwestern University. Feldman’s presentation consisted of a seemingly casual discussion between Irena Haiduk and Emily Cruz Nowell as Feldman’s surrogate. The piece was a reminder of both the existence and rupture of conventional structures of discourse, as Haiduk and Nowell’s conversation also involved the odd formality of Nowell intermittently singing part of a Bikini Kill song with a thundering voice. Carolyn Christov-Bakargiev thus seems to have quite heavily drawn on Chicago’s artistic and intellectual community, to which she herself has connections, through three years as a visiting professor at Northwestern University. 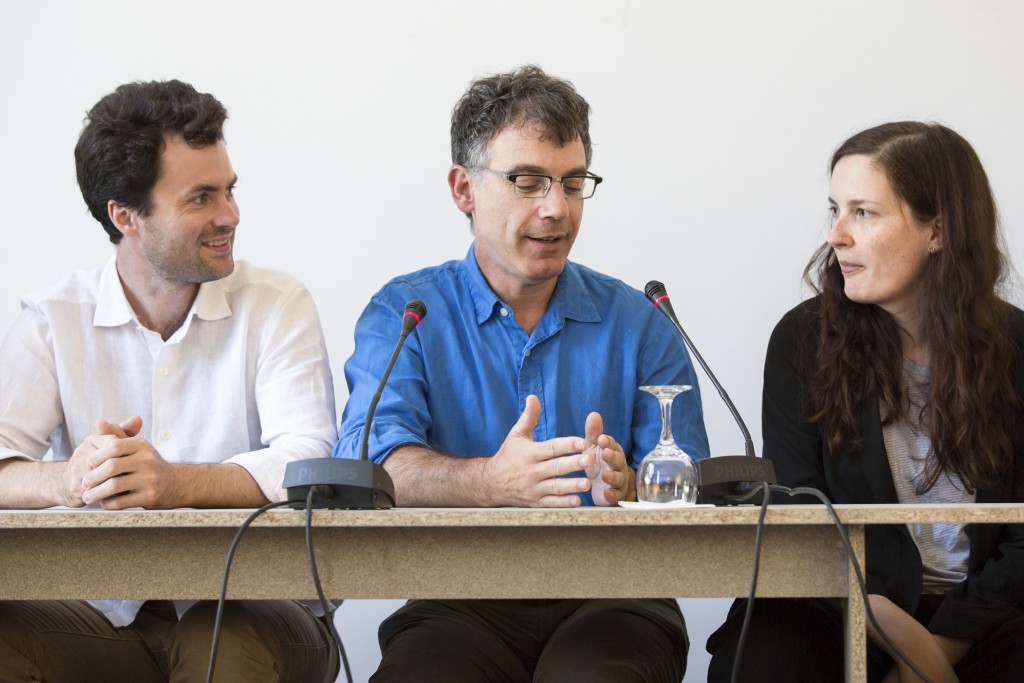 Irena Haiduk’s “Seductive Exacting Realism” is an audio work based on her interview of Serbian political activist Srda Popovic, in which she explores notions like revolutionary sentiment, political efficacy and complicity. “She is speaking about a kind of reality that is behind the apparent neutrality of our software and devices in our digital world—the real voice of Siri,” said Christov-Bakargiev in an interview with BlouinArt. The work is a companion to her concurrent exhibition at The Renaissance Society in Chicago.

Ideas of remembrance, commemoration and unsilencing, which Alÿs and Erek’s works suggest, are also taken up by Michael Rakowitz in “The Flesh is Yours, The Bones Are Ours.” Moulds and plaster casts are splayed across floors; rubbings of floral architectural ornaments cover the walls and overlap each other. These decorative items were often made in Armenian workshops. They adorn buildings all around the Turkish city, like specters of the past, marks of a cultural practice and traces of a people. Some say that the first genocide was the exile of thousands of dogs to the island of Sivriada in 1911, just four years before the Armenian genocide. In the plaster mix, Rakowitz included ground remains of some of these dogs, so the room full of casts is more like a cemetery. Through obsessive repetition, Rakowitz’ project strives to make sense of a piece of history by correcting or redirecting our vision of urban topography.

The performative and meditative process of Theaster Gates’ “Three or Four Shades of Blue” also appears as an attempt to channel a story. By making and remaking, and pondering an intricate seventeenth-century Iznik bowl, Gates activates a heritage practice. Some of the bowls were accompanied by a heap of coarse powder, each of which was labeled with the name of a different venue at the Biennial—implying that material from each venue’s built structures was used to make the corresponding bowl. Like Rakowitz, Gates appears to be unlocking the narrative and anthropological power of craftwork. His piece animates sediments from the city, in a way, like stirring saltwater. 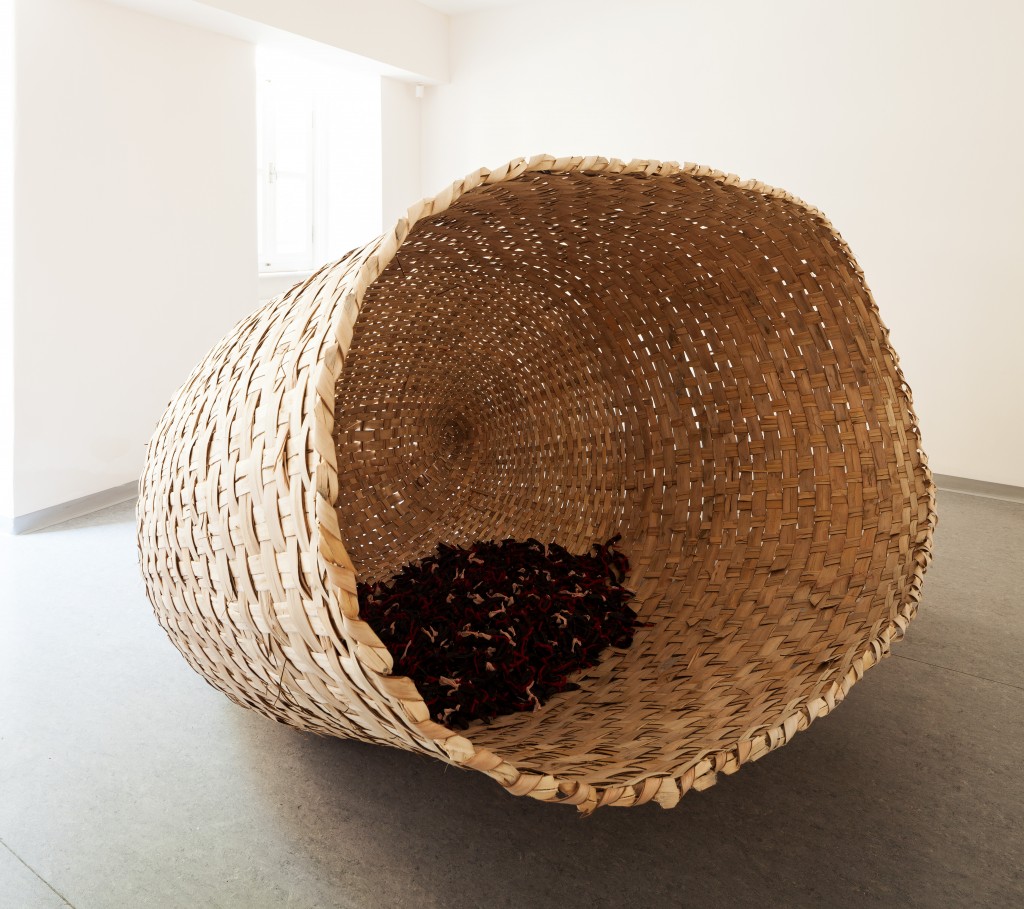 Trekking this exhaustingly expansive Biennial had been nothing less than a hot and sweaty matter. The Istanbul Modern—the sole museum for modern and contemporary art in Istanbul—was at last a haven for visitors. Aside from gloriously blasting air-conditioning, the Modern showcased stunning pieces. The exhibition unfolded with ease. Pieces subtly invited viewers into closer looking, like Asli Çavusoglu’s “Red/Red” monochrome drawings on paper, or Richard Ibghy and Marilou Lemmens’ “The Prophets.” This opening piece is a playful, finely detailed, and large set of tiny 3D maquettes of graphs and diagrams that illustrate economic phenomena.

Other pieces spoke to each other, like Sonia Balassanian’s “Silence of Stones” and Marwan Rechmaoui’s “Pillar” series, which both addressed the idea of physical or collateral damage. The first work, a set of large, disembodied and roughly carved stone heads immediately felt like an elegy to the recent attacks by ISIS on some of the oldest ruins of human civilization. The second, a set of tall, rectangular pillars of holed cement, steel bars and other materials resembled the war-stricken architecture of places like Beirut or Gaza. In both cases, the affected physical object holds a memory and tells a story.

The exhibit at the Istanbul Modern was inviting, coherent but not monotonous and at times weighty and emotive. For the first time, the decontextualized and polished environment of a museum felt more like a place for discussion—more so than the various installations around Istanbul, which, because of their rootedness in history, community, or architecture, lent themselves more to reflection, contemplation or careful listening.

Saltwater continues to move, transporting messages, testimonies, common histories and sounds. It is never quiet or at rest. Christov-Bakargiev’s Biennial strives for a convoluted and utopic stance, a kind of atemporal positioning that is neither a nostalgic song nor a post-political neutrality. For now though, what “Saltwater: A Theory of Thought Forms” seems to do best is hint at contemporary insights and whisper clues to historic treasures.

[…] who studied under Cezayirliyan and with whom Rakowitz collaborated to make his designs, which were first shown at the 2015 Istanbul Biennial and recreated this summer in Chicago with new elements and expanded narratives that draw on […]