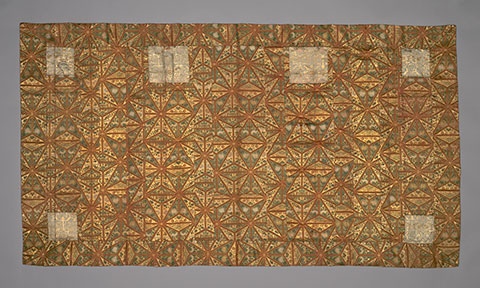 Sometimes, discipline is the basis of freedom. The sonnet is a fourteen-line poem in iambic pentameter. The haiku is a three-line poem with seventeen syllables. The sonata form demands exposition, development and recapitulation. Shakespeare, Basho and Beethoven thrived within these constraints.

The kesa, the outer garment worn by Japanese Buddhist monks, imposes on its maker many restrictions. It must be quadrilateral, composed of cloth or paper (recalling the shreds and patches worn by the historical Buddha), and composed in columns (usually seven), framed by a border with mitered corners. There are often six additional blocks placed here and there, ostensibly to strengthen the garment, but really because another rule creates another opportunity for beauty.

The exhibition is stunning for the sumptuousness and complexity of the fabrics. Many use silver and gold threads or gilt paper strips laid down on silk. There is brocade and embroidery, millefleur and other floral decoration (peonies and lotus flowers are common), and other motifs too: butterflies, musical instruments and even a cockerel. A few Kesa are made from cut-up kimonos or Noh costumes. One from the mid-eighteenth century features a brick-red lattice over a gilt floral base. The pattern appears indebted both to Islamic star patterns and the ribbed vaults of Gothic churches in the perpendicular style. I have no idea if these anonymous artists could have seen drawings or engravings of such things.

Kesa are like mandorlas, Buddhist maps of the world that reveal the overlapping of heaven and earth and the union of all living things. They endow the wearer with an aura of enlightenment. And yet they suggest movement more than contemplation. One in particular looks forward to William Morris; it is comprised of a repeating pattern of gold peonies with lotus pod center and accompanying leaf in a black field. Each flower, pod and leaf is slightly different and their staggered placement combined with their seven-column configuration makes the pattern of repeats impossible to discern. For Morris, such disciplined vitality signaled a future world of freedom; it may have meant the same thing to the kesa masters. (Stephen F. Eisenman)

Through February 14 at the Art Institute of Chicago, 111 South Michigan