Unidentified Artist. “Our Lady of the Rosary of Chiquinquirá with Female Donor,” late-seventeeth/early-eighteenth century.

The title of this dossier exhibition is misleading. There is nothing here about voyages: no ships, disembarkations, or conquistadores. It should instead be called: “An Assemblage of Colonial Andean Paintings, Mostly Religious, that Occlude Matters of Racism and Slavery.” The works are gathered from the Art Institute, a local private collection, the Newberry Library and the Denver Art Museum.

At the start of the colonial period, there was considerable controversy about the status of the indios in the Andean empire, one of the most extensive in the history of the world. Those who embraced Christianity, the reasoning usually went, merited protection from killing or enslavement. “Are these [Indians] not men?” asked Friar Antonio de Montesinos in 1511. “Are you not obliged to love them as yourselves?” Notwithstanding such pleas, millions died of disease, overwork and heartbreak in the century that followed. But in some ways, the worst was still to come. 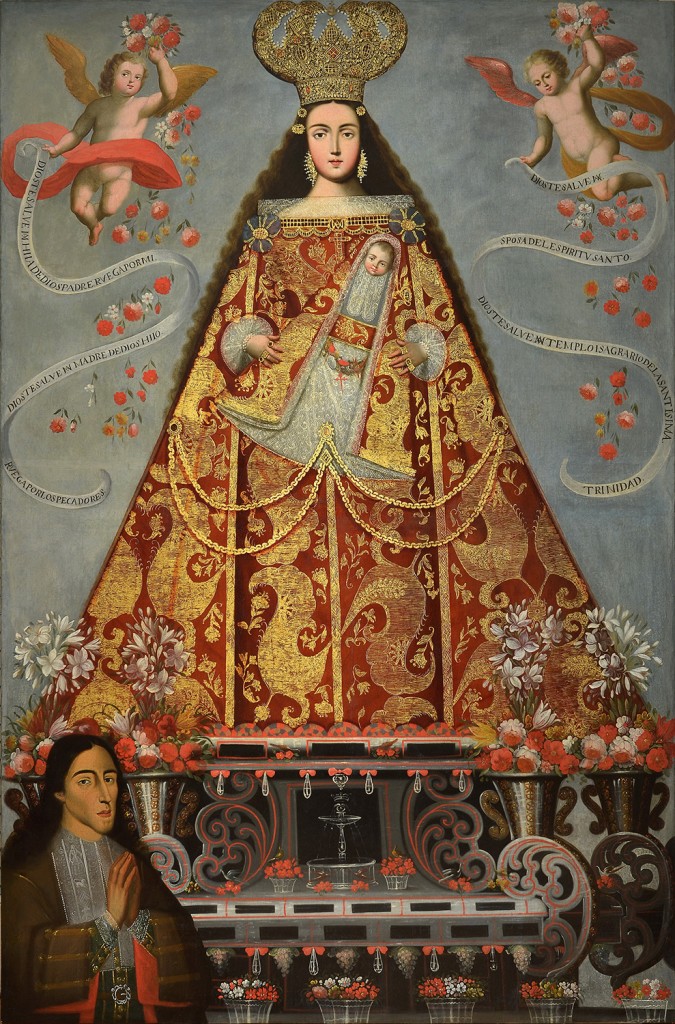 Unidentified Artist. “Our Lady of Bethlehem with a Male Donor,” 18th century.

By the seventeenth century, scruples about slavery were overcome by economic need and vast numbers of black Africans were imported to Peru to replace the decimated native workforce. They labored in the silver mines of Potosi and gold mines of Carabaya, and the gilt costume of the Virgin in “Our Lady of Bethlehem with a Male Donor” (c. 1750) is a record of that exploitation. It is also an image of indigenous connivance: the donor has darker skin than the Virgin and may be a wealthy descendant of Inca royalty. By the end of the eighteenth century however, such self-imaging was unlikely. Modern racism, combined with chattel slavery, made dark skin a signifier of moral inferiority. Few elites wished to acknowledge they were mestizaje.

But the imagery of race appears nevertheless in casta paintings from Mexico that depict the many possible racial mixes, and in the surprising “A Bishop with Indigenous Children,” showing the cleric passing prayer books to a pair of Indian children. Each is tawny colored, wears a feathered skirt and holds a quiver of arrows, sure signs of Indian-ness. They look delighted, but soon they will be working the mines of Potosi or the Jesuit sugar haciendas of the Huaura Valley. (Stephen F. Eisenman)

Through February 21 at the Art Institute of Chicago, 111 South Michigan