In order to understand what Kerstin Brätsch and her collaborators are up to it is useful to think about another group of Germans from a hundred years ago. The artists of the Blue Rider (Kandinsky, Münter and Marc) painted on glass, canvas and paper. They sought inspiration in naïve, folk and children’s art. And they were eclectic in form and ideas: at one moment reviving medieval legends of St. George and at another promoting Theosophist notions about a “sounding cosmos.” Brätsch is every bit as catholic in her range of materials and references. Her large-scale drawings like “Unstable Talismanic Rendering” (the title invokes Symbolist-era mysticism) employ diluted pools of ink to create amoeba-like shapes floating atop white or black fields. Her glass paintings are themselves multimedia: “Mund der Wahrheit,” the title of which invokes a celebrated first-century marble relief of a river god (tell a lie and it will bite off your hand), consists of a sheet of leaded and painted glass resting on a glass and steel easel from which extend a cluster of dinosaur stickers. The half dozen or so digitally printed silks by Mariechen Danz draped over twisted steel and aluminum armatures create the impression of a designer boutique in Neiman Marcus. 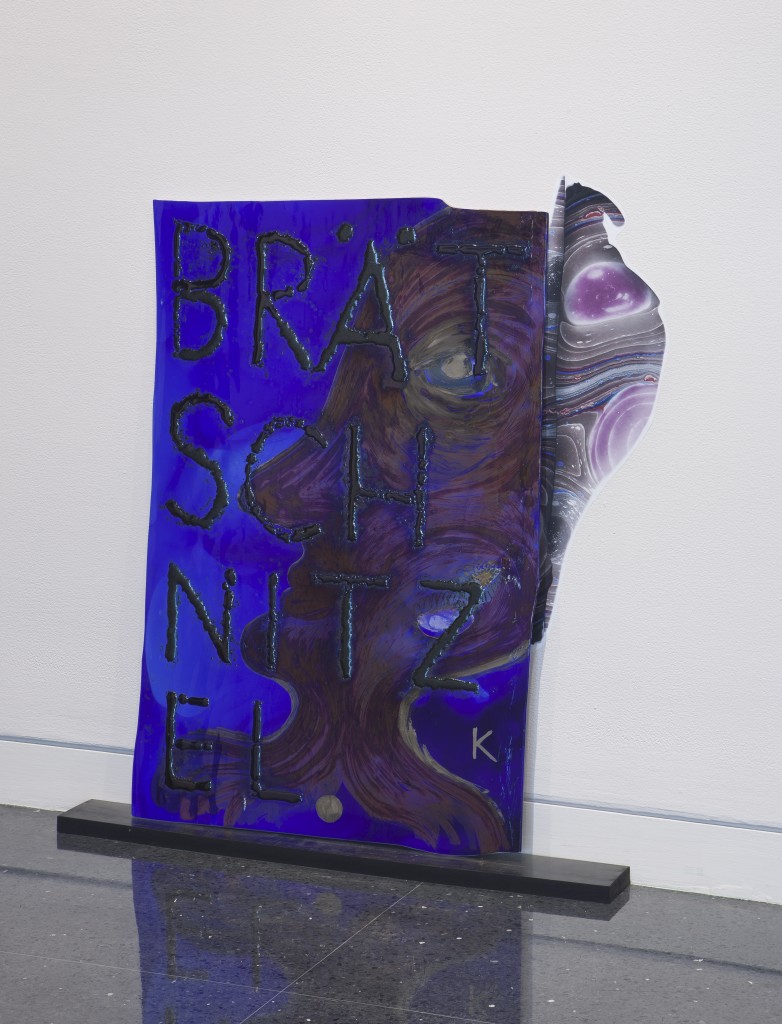 Brätsch and company don’t appear to be striving toward the spiritual in art. Whereas the Munich Expressionists derided “material treasures” and “material wealth,” Brätsch embraces them. The silks, gold-leaf, paper marbling, luster, agates and glass jewels create an opulence the obverse of Marc’s visions. And whereas Kandinsky et al. distrusted modern technology, Brätsch endorses it. The digitally printed silks by Danz are the product of computer software more than imagination—a case of industry trumping intuition. The Expressionist era cannot of course be repeated, and anyway, nobody would want to chance its cataclysmic aftermath. But in invoking the arts and crafts of a century ago, Brätsch invites us to compare their ambitious agenda to hers. And while she may not live in a moment propitious for the creation of “spiritual treasures,” she needn’t have so thoroughly surrendered to the allure of “material wealth.” (Stephen F. Eisenman)

Through December 19 at the Arts Club of Chicago, 201 East Ontario