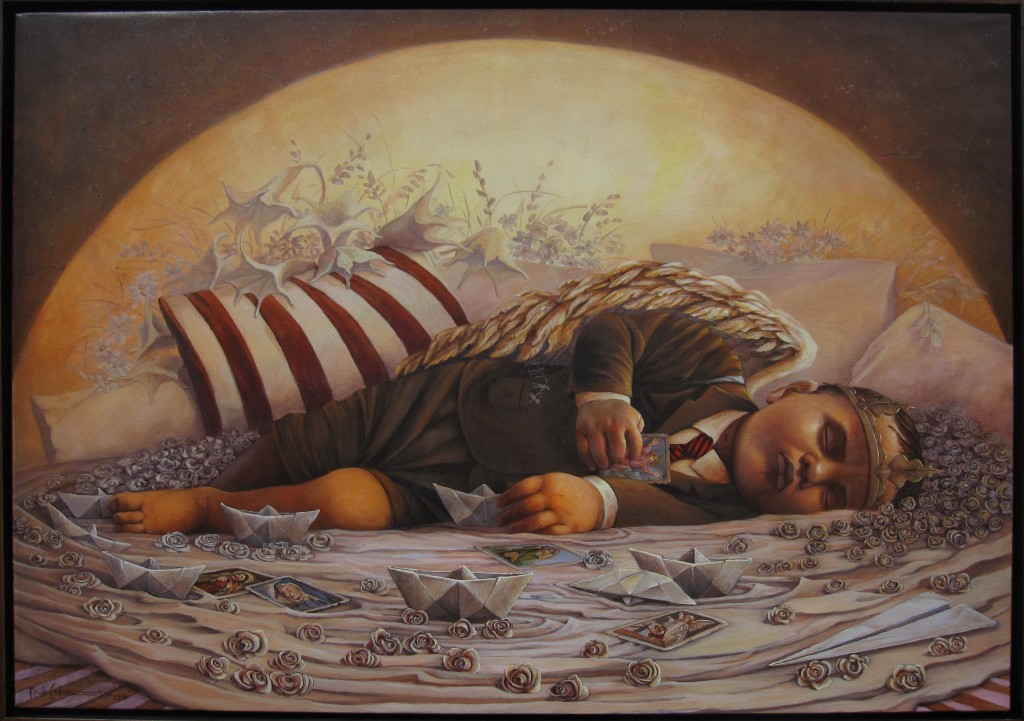 Including over ninety artists from both the United States and Mexico, “La Muerte Niña: Day of the Dead” is an exhibition in which the private becomes public. The space is awash with orange and yellow marigolds, sequins, skeletons and religious iconography, but beyond this visually stunning assembly of cultural symbols are carefully constructed personal stories.

The exhibit features thirteen ofrendas, or offerings, which are placed on altars celebrating the dead. One such altar is dedicated to slain Tejano musician Selena Quintanilla-Pérez. This year marks the twentieth anniversary of Selena’s death, making this a timely celebration of the artist’s life. Draped in shimmering indigo, gold, magenta and emerald-colored fabric, the altar’s construction and offerings juxtapose the glamor of celebrity with personal touches. At the altar’s base are bottles of Coca-Cola, Jack in the Box fast-food wrappers, pizza boxes and a bag of Doritos, some of the icon’s favorite foods. With this ofrenda, artists Al Rendon and Henry M. DeLeon have produced a moving, relatable tribute to their departed friend.

Although popular culture is woven throughout “La Muerte Niña,” curator Dolores Mercado and the National Museum of Mexican Art have dedicated the exhibition to the forty-three missing students from the Ayotzinapa Rural Teachers’ College. Works memorializing the students, such as Alfonso “Piloto” Nieves’ “We are Earth and Earth with Fire makes Stone/Somos tierra y la tierra con el fuego se hace piedra: ¡¡Ayotzi vive, la lucha sigue!!” ask viewers to consider the ways their political apathy may have contributed to the disappearance. Representing the students as obsidian clay skulls, Nieves calls on the Mexican state to carry the weight of an ambiguous loss. The work exists somewhere between the worlds of the living and the dead, demanding answers to evaded questions while taking pride in 500 years of Mexican resistance.

“La Muerte Niña: Day of the Dead” is not an exhibition about mourning. Instead, it functions as a celebration of life, a destigmatizing representation of death and a call to action. It serves as a reminder that all human beings meet the same fate and that the inevitability of death should encourage us to live richer lives. (Devin Malone)

Through December 13 at the National Museum of Mexican Art, 1852 West 19th.