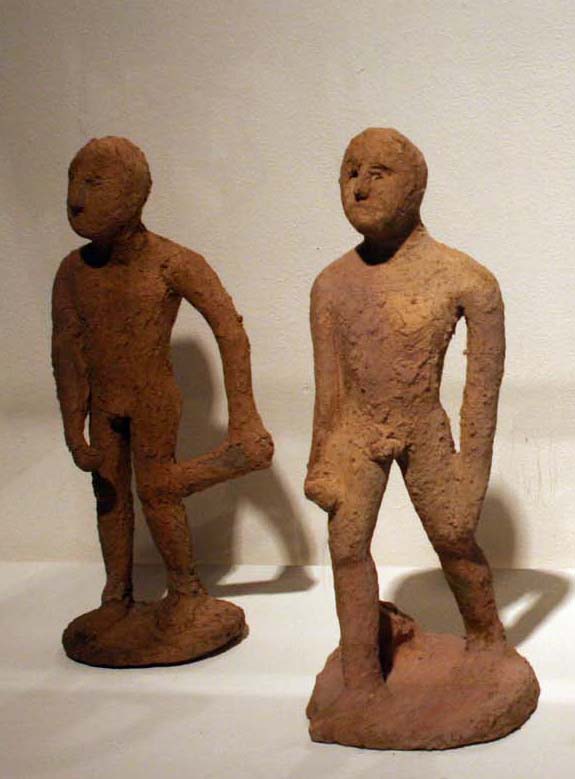 As one might have predicted, the attitudes promoted in this exhibit are politically correct, projecting an exhausted despair concerning the fate of civilization and the planet. There are no calls for free market capitalism or protecting the unborn, but neither are there ringing demands for social justice. The curator, distinguished gallerist Frank Paluch, could likely have pulled in work from any ceramicist in America, but his Chicago gallery, Perimeter, is primarily committed to an East Asian aesthetic. Harmony, high craftsmanship and identification with natural forces are offered as a welcome respite from civic life, rather than as a passionate participation. Accordingly, the focus here is not “political” but “politic,” which he defines as “wise, discreet, wary, mindful, intelligent, reasonable, sensible, wily and artful.”

The modest earthenware human figures by Margaret Israel best exemplify those qualities. Their conflation of drama and balance presents what is timeless about the human condition, recalling similar ceramic figuration from ancient Greece, Japan and Mexico. She was a good sculptor and deserves more attention. Far better known is the Pittsburgh ceramist Edward Eberle. He applies a high level of classical figure drawing to pottery whose surfaces are broken and jumbled enough to represent contemporary civilization. Beverly Mayeri offers a similar conflation of classical aesthetics with contemporary issues. Her contribution is a serenely beautiful bust of a young woman. It might well have come from fifteenth-century Florence, except that it has apparently been ring-stained by ever-rising ocean levels.

The most direct response to political events is delivered by Derek Walter’s white elephants, symbolizing the thirty-one states and the Supreme Court justices who made George W. Bush the 43rd American President. I might have appreciated this humorous dismay back when it was first shown during the Taste of Chicago, but now, like old campaign buttons, it’s just a historical curiosity. Less topical but more cunningly made are the tiles modeled by Richard Notkin. His miniaturization is amazing. But the other artists contribute nothing that’s remarkable, either aesthetically or politically. Whether folksy, like Jack Earl, David Trost, or clinical, like Catherine Schwalbe, they offer only a tired repetition of accepted opinion. (Chris Miller)