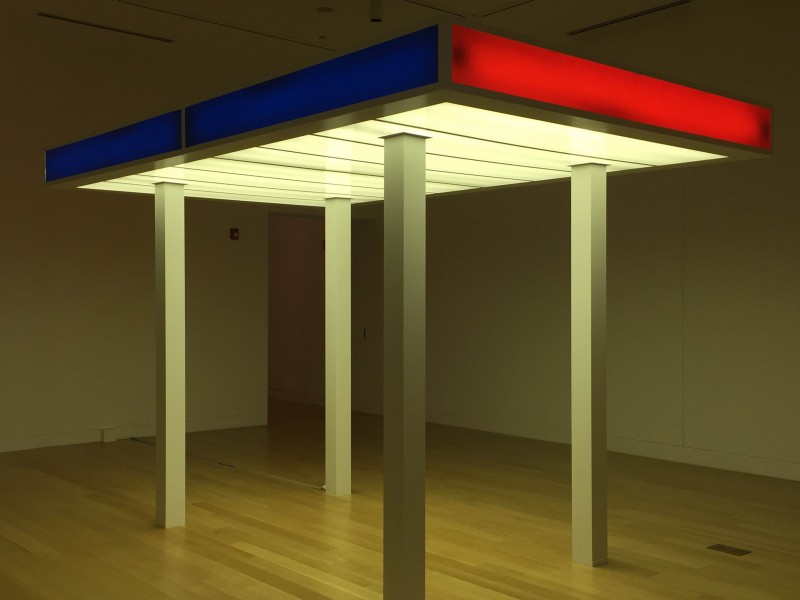 The subject of “Idol Structures” is the infrastructure of signs. Not the term in linguistics that defines the marriage of signifier and signified, but actual signs—billboards and roadside advertisements. Siber is interested in the configurations of steel, neon and vinyl that comprise signs but not in the messages they convey: think Mark di Suvero rather than William Eggleston.

This is not mere formalism: signs (in the linguistic sense) emptied of meaning. Capitalism is the specter here. The purpose of advertising and marketing, the economists Baran and Sweezy argued, is not to guide consumers to the commodities that best satisfy needs, but to increase aggregate demand and reduce the tendency of capital to idleness and profits to fall. In short, advertising keeps the economy afloat. By showing the structure of signs but not their content, Siber brings to view what would otherwise be mere abstraction.

Some of the works here are excessively culinary. “Yellow/Gray” and “Red/Green” are photographs of vertical, oblong forms (side views of signs) that suggest found artworks by Ellsworth Kelly. “White” is a five-foot-by-seven-foot oblique view of a half-round, stainless steel sign set on a white painted metal plinth. The photograph is delicious in the manner of Andreas Gursky or his teachers, Hilla and Bernd Becher. “Lighted Shelter” is a room-size installation of four white posts supporting a rectangular roof of illuminated plexiglass, white on the bottom, blue on the long, and red on the short sides—a Minimalist Exxon/Mobil station. “Trapezoid” is comprised of a walnut post, rising from a black steel base, supporting a walnut frame containing an illuminated box surmounted by six, fluorescent tubes—H.C. Westermann meets Dan Flavin.

But there is another problem here: nostalgia. Maybe it is just late middle age, but billboards—even in etiolated form as here—signal to me cross-country road trips, Burma-Shave and Route 66. They are dinosaurs more than viruses and Siber’s art a kind of paleontology. The real hidden persuaders today are found not along the highways but in our pockets, pressed to our ears and beneath our thumbs. (Stephen F. Eisenman)