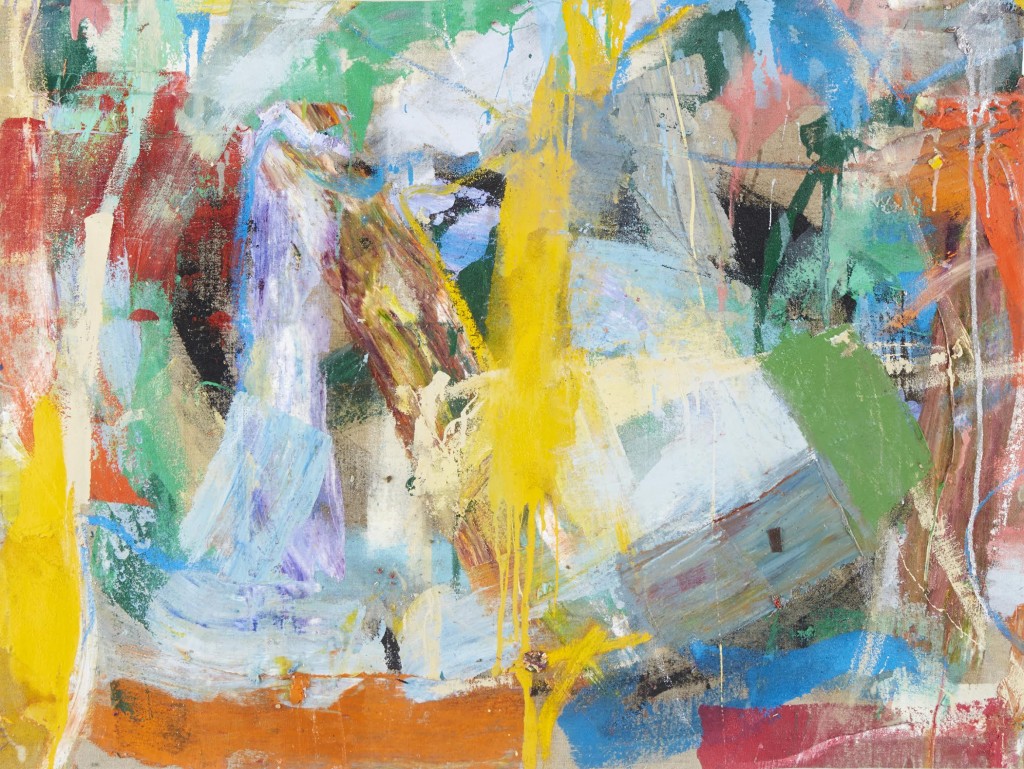 With respect to Clement Greenberg, no reference to either narrative or the visible world has apparently been pursued in these recent paintings by Michael Hedges. There is no depth of space, no legible text, no emerging human bodies or faces, no salutes to popular graphics. There is no sense of specific place, either indoors or outdoors. Going one step further, even mathematically defined plots or shapes have been eschewed. And unlike the pioneers of Abstract Expressionism, these paintings do not appear to have been driven by any personal struggle. Instead, they seem bent on magnifying and balancing the painterly possibilities of color, form and pattern. Vibrant shapes emerge like tropical fish to present themselves rather than the emotion of the artist. To amplify this effect, Hedges sometimes applies cut strips of painted canvas to the surface of a painting. As Greenberg once said about his era’s avant-garde, this work is “valid solely on its own terms, in the way nature itself is valid.” Still, Greenberg might have been chagrined by the banality of the titles chosen: “Tumbling River Ranch,” “The Resale Shop,” “Drive-in movie,” “Casino Winnings” and “A Good Day.” Apparently, the artist is not afraid of bourgeois consumerism.

Though he often makes dramatic gestures, they are lightly brushed, as if they came from the heart or mind, rather than applying the thick, heavy swirls of pigment that suggest the guttural. Balanced around a strong sense of center, erupting dramatic movements signal assertion rather than surrender, and as with any living creature, the design extends into every area of detail, no matter how small. These paintings are about the endless wonder of life, rather than a search for the quirky and surprising. Like nature, the artist is experimenting with diversity, and some efforts fail. When he covers the canvas with too many cut-strips, the results begin to feel tortured rather than luxuriant.

As Abstract Expressionism moves into its eighth decade as an American tradition, the works of this young master are hardly revolutionary. But they do exemplify the kind of high aesthetic standards that have sustained other visual traditions across millennia. (Chris Miller)