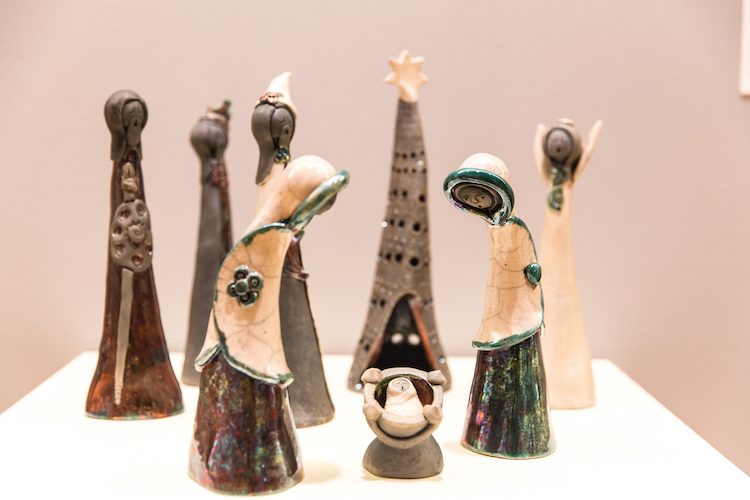 The crèche—a display of figures portraying the Nativity, Christ’s birth—is a common holiday feature across cultures, as “Art and Faith of the Crèche: The Collection of James and Emilia Govan” shows. A LUMA tradition for the past eight years, this year’s exhibition reveals the Govan family’s vast crèche collection from around the world, including a gallery devoted to crèches from Latin America.

Crèches consist of at least three figures, Mary, Joseph and Jesus, but sometimes dozens more: animals, shepherds and the three Wise Men may also be added. Crèches have changed over time, and such variety is seen here with more than one-hundred crèches on view. Each is different, from theatrical to more humble appearances, and all the crèches displayed provide their own interpretation of an ancient story. Part of the fun is examining how crèches vary in cultures around the world in terms of figures’ clothing, materials used and the type of animals included.

The Govans, who began collecting in the 1970s, often commissioned an artisan to make a crèche that echoed their native land. Knowing this, the visitor looks for cultural cues. “USA (Alaska)” aptly portrays Alaskan characteristics: three figures huddled together in fur-covered clothing with baby Jesus on a sled, guarded by what looks like a Husky. Or take “Ecuador,” a crèche made from tagua nuts, which can be found growing on palms in Ecuador and other Latin American countries.

A joy of the show is seeing this ancient Nativity story through a contemporary lens; it is surprising how many crèches were made in the 1990s or twenty-first century. Take “Ireland (Sligo).” The museum explains that artist Rachel Quinn reimagined Catholic and Celtic conventions in current styles. At the same time, it is remarkable how much of this story has endured: figures still huddle around the Christ child.

Regardless of one’s faith, the artistic styles and techniques that make up the crèches in this show are laudable, as is LUMA’s effort in tastefully putting together an exhibition with religious connotations—effectively bringing together countries and cultures in the spirit of the season. (Amy Haddad)

Through January 10 at the Loyola University Museum of Art, 820 North Michigan.