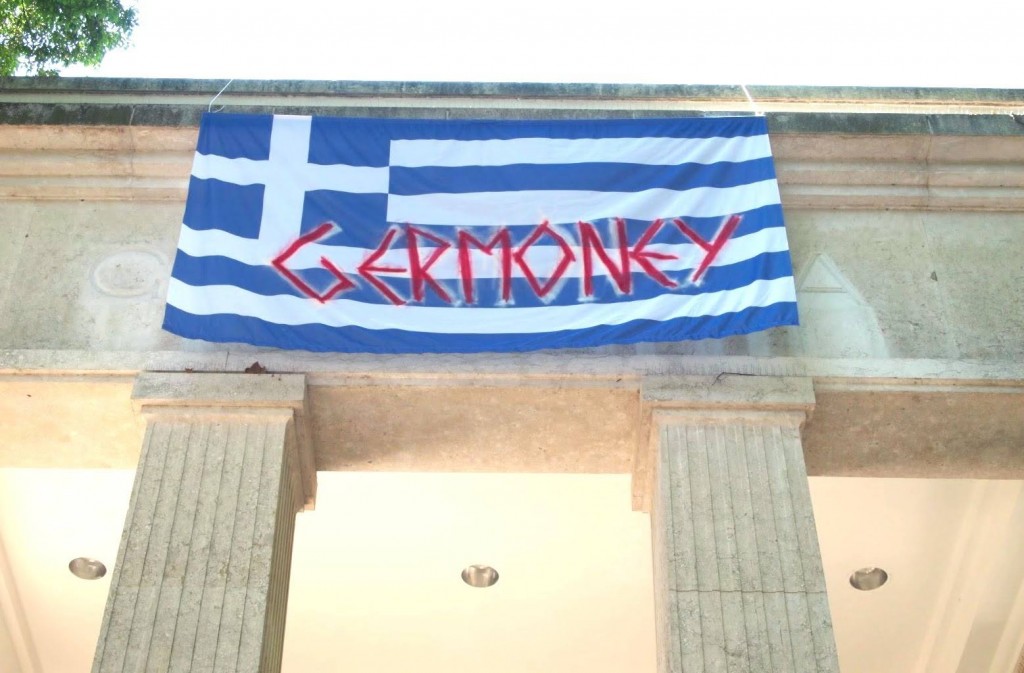 If I were not dreading what comes next, I would be happy for this year to be over. December brought no relief from the kinds of horror that we have already seen too much of this year. California’s gruesome mass shooting and the Islamophobic backlash has completed the circle of fear and loathing that will make conservative demagoguery an equal partner with global terror in the coming world war. In this moment, I am reminded of Martha Rosler’s “House Beautiful: Bringing the War Home” collages, which she made during the American invasion of Vietnam. In each piece, she pasted media images of the faraway combat over the immaculate interiors of midcentury domestic dwellings, effectively collapsing the image worlds of American hegemony as they were co-dependently constructed at home and abroad. Today, one does not need the artist’s imagination to see the war come home. On television and online, squadrons of tactically outfitted paramilitary police fill the streets of urban America, responding to the latest mass shooting or terrorist attack, or otherwise suppressing the swelling street protests in Ferguson, Baltimore and Chicago. Sadly, these images on our screens are not made by collage.

The night before San Bernardino erupted in violence, the artist Hito Steyerl spoke at the University of Chicago to a crowded auditorium at the Logan Center. Steyerl, a video artist and professor at the Berlin University of the Arts, co-represented Germany in its national pavilion at the Venice Biennale this year. A severe and foreboding structure echoing the ideology of its Nazi-era renovation, the German Pavilion has long been the subject of an impassioned debate over the merits of historical memory and preservation. Since the removal of its swastikas and a Nazi eagle in 1945, little else has been done to permanently alter the structure’s fascist architectural language. This year, Steyerl and the other artists representing Germany sealed off the front entrance of the temple-like pavilion, forcing visitors to enter and exit the building through the cramped service stairwells hidden in the sides of the structure, a choreography that echoed the concurrent efforts of Syrian refugees moving across Eastern Europe toward the promise of asylum offered by a reluctant German host. Over the summer, as Germany exercised its economic dominance of the Eurozone to press for extreme austerity in the negotiation of a Greek bailout, Steyerl and other artists hung a Greek flag with the portmanteau “GERMONEY” painted on it in red from the roof of the German pavilion. Perhaps to the chagrin of her host nation, Steyerl seems to have taken quite seriously the charge of representing Germany at Venice. 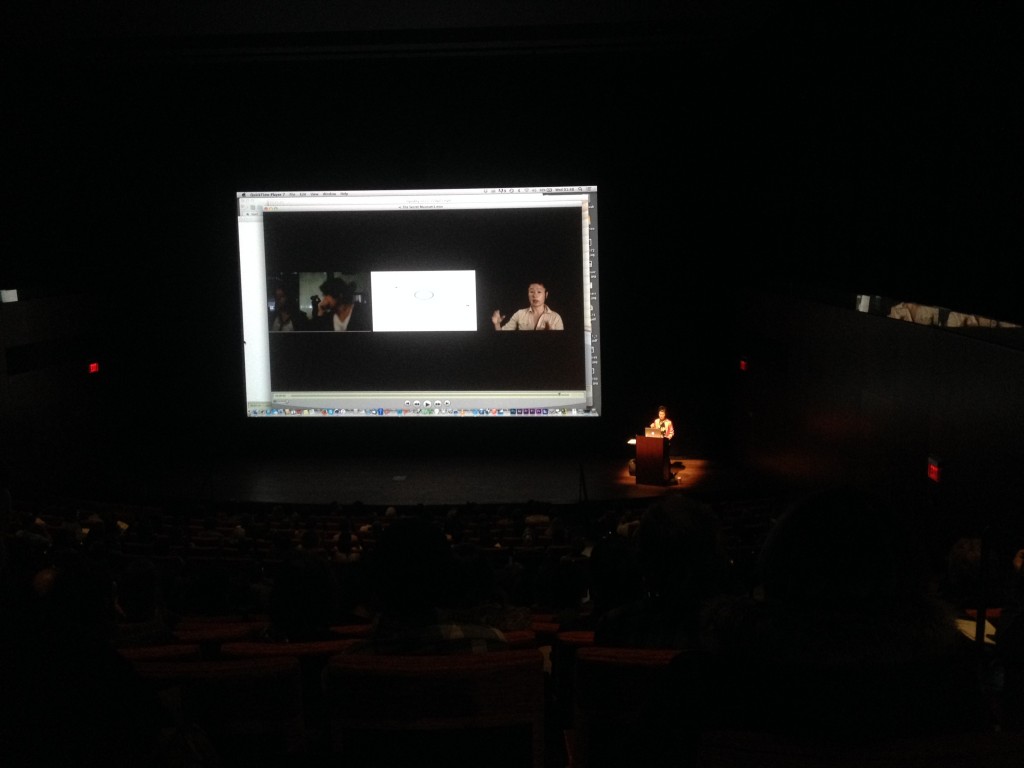 Hito Steyerl at the Reva and David Logan Center for the Arts, University of Chicago/Photo: Dave Lloyd

At the Logan Center, Steyerl spoke between segments of her work and clips of other talks she has given. The lecture itself became a sort of collage, drawing together seemingly disparate materials and events into a brilliant meta-narrative of global image culture and the politics of representation. Steyerl sampled heavily from “Factory of the Sun,” the new work that she showed at Venice, which places the passive viewer in a video-game simulation of a not-too-distant, dystopian future. In it, Deutsche Bank deploys drones to assassinate anti-capitalist protesters while slaves are forced to dance disco in gold lamé body suits that capture their movements and convert them into light energy for sale on the open market. A dark humor fronts Steyerl’s grim portrait of tomorrow. That night, she spoke candidly of her embeddedness in a neoliberal political and economic structure that enables her to ask questions like “Is the Museum a Battlefield?” from the inside of the very museums that purchase and display her art.

As Steyerl’s work exemplifies, representation is a core concern of both art and politics, and events like the Venice Biennale function as a veritable global summit for culture in which artists, like political leaders, must decide how to convey the contradictions of compassion and complicity that have been foisted upon each global citizen in this age of limitless connectivity and fluid information. Earlier in the fall, another representative to Venice spoke to a Chicago audience. Joan Jonas, who represented the United States in its Jeffersonian pavilion, delivered a lecture at Northwestern University at the invitation of its Department of Art Theory and Practice. A living legend of pioneering video and performance art, Jonas spoke of her role as a performer and ritual-maker with regard to her five-part Venice installation, which combined video, installation and live performance in a layered narrative about the intertwined lives of fish, dogs, bees, children and ghosts. At times, Jonas seemed lost in her thoughts, though she also delivered sharp, poignant reminders of our shared global fate. “Children are the inheritors of the world,” she said in reference to her recent work, which mingles videos of young people with narratives of ghost stories and haunting images of Cape Breton forests. Recalling the talk months later, the most notable moment was when a young artist, a Greek citizen who lives and works in Chicago, asked Jonas how she was able to represent the United States considering its current role in global politics. Jonas’ reply was not nearly as memorable as the question itself. 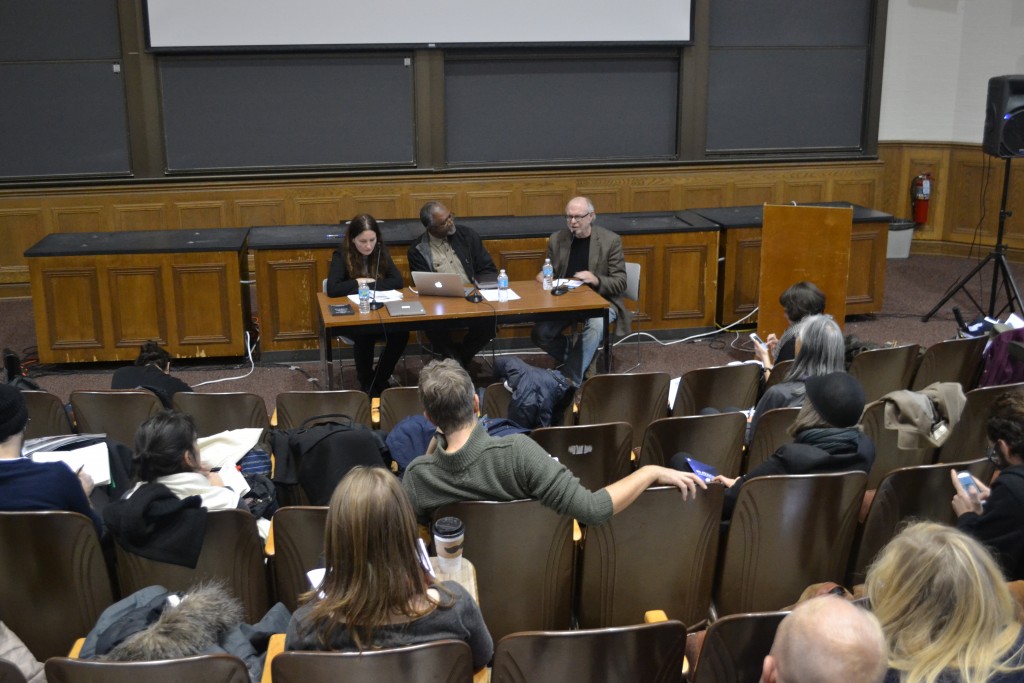 By the very nature of its practice of image making, the politics of representation pervade art and bring it close to more overtly political contests over narrative, memory and history. At the end of November, the Renaissance Society addressed this thorny essence of images in a conversation between Irena Haiduk, whose exhibition “Seductive Exacting Realism” kicked off the institution’s 100th anniversary season this fall, and Kerry James Marshall, whose major museum survey will open at the Museum of Contemporary Art in April. A component of the “In. Practice” symposium moderated by W.J.T. Mitchell, the two Chicago-based artists sparred over their diametrically opposed approaches to the power of the image in art and life. Marshall, who has spent more than thirty-five years painting critical interventions into the Western canon of art history to insert black bodies and African American experience where it was deliberately excluded, took the firm position that “the image is everything.” His work, as he describes it, has been largely devoted to the creation of counter-images to contest the dominant white, Euro-American image canon generated through centuries of Western art production. Haiduk, who is Serbian and asserts the oral tradition of her heritage, has worked against images in her recent work. Her show at the Renaissance Society consisted of a darkened, mostly empty gallery with a recorded interview playing from the four corners of the room and a few shadowily sculptures hanging in the eves of the pitched ceiling. Despite their apparent disagreement about how to deal with images—either to assert them emphatically or hide them in darkness—the very premise of the debate did not make room for challenging the prevailing assumption that images are potent instruments of power. In this way, the conversation was both affirming, and yet, ultimately disappointing.

Days later, far away from Chicago and its heady debates on the power of images, an artist was stabbed at this month’s Art Basel Miami Beach, the American art market’s annual pilgrimage to warmer weather and easier sales. I read that witnesses at first did not respond to the attack, thinking it was a performance. Apparently, they mistook the act of violence for a mere image of violence. In art and in life, this is an increasingly common mistake.