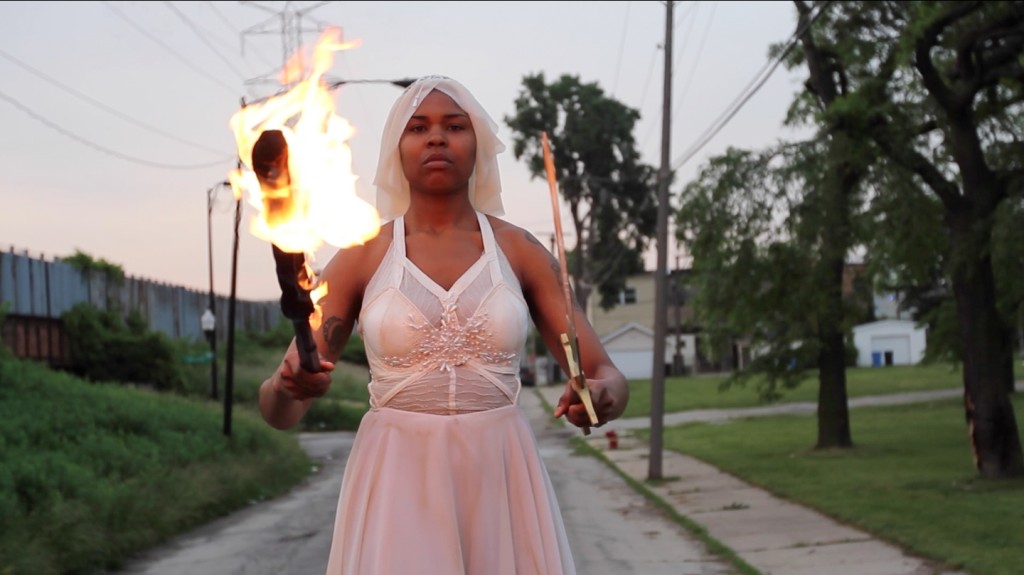 It is customary to begin a review of Jefferson Pinder’s work with a generalization about blackness, then to quote the artist’s goals for transforming the scene of American race relations. It is customary to note his debt to the Black Arts Movement, to marvel at his multidisciplinary expertise and to place him in relation to other artists—usually Glenn Ligon or William Pope.L—who likewise treat race through elliptical objects and performances. It is customary to mull the difficulty of de-racializing the racialized work of racialized artists. It is usually customary to do so with a twinge of white guilt.

It is, unfortunately, not customary to probe the particulars of Pinder’s formal propositions or their fledgling proposals about material and meaning. The pieces collected in the exhibition “Onyx Odyssey,” mostly made in the last few years, meditate on the visual vocabulary of race and its American peregrinations in ways that trouble neat equations between art and activism. “Gauntlet,” for example, consists of charred billy clubs suspended over the viewer’s head by invisible wire. In “Assimilated,” a heap of charcoal lies at the feet of a standing figure outlined in neon à la forensic chalk. “Moriaen’s Shadow” (named after a black knight at King Arthur’s court) stacks organ pipes on a deck, all ragged edges and worn wood. All three works evince a remarkable sensitivity to texture and light.

Redolent of both recent and distant history, these suggestive ensembles pose puzzles; how does spectatorship work in a post-Obama era? What demands can art make and meet? What to do with the legacies of “The Battle of Los Angeles” and “The Souls of Black Folk”? (The show’s centerpiece is a video adaptation of Du Bois’ play “The Star of Ethiopia.”) If the exhibition reprises Pinder’s longstanding interest in iconographies of enslavement, such as the ship and the brutalized body, it also signals his timely engagement with an oblique, uncharted politics of the now. This expertly installed show by one of Chicago’s most important artists shouldn’t be missed. (Luke A. Fidler)