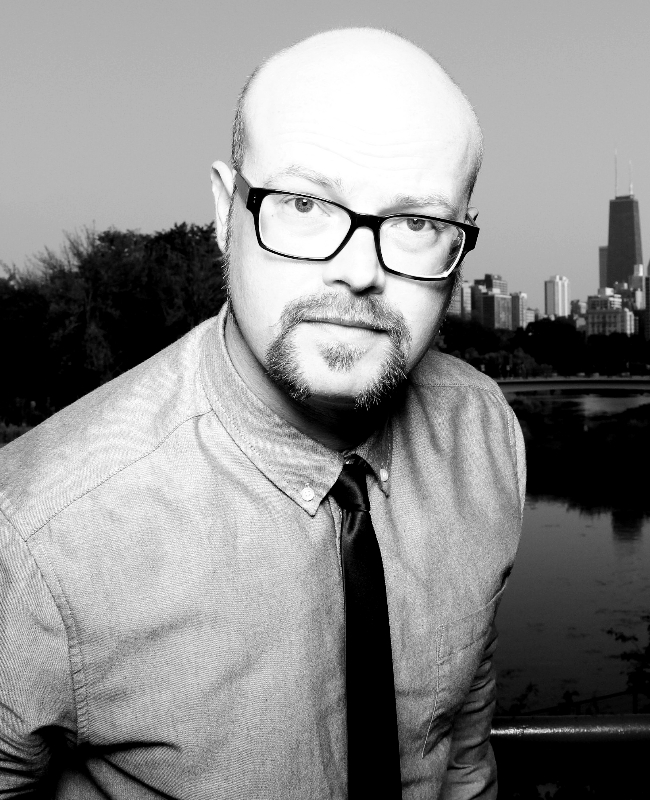 “I think a lot about accessibility and how this work can potentially open up the day for the people walking by in a way that they aren’t expecting,” says Erik L. Peterson. We’re standing in front of “The Oasis,” his site-specific installation in the garden of The Arts Club of Chicago. As the buzz of early morning rush hour swirls around us, Peterson calmly pulls two pairs of headlamps out of his coat pocket. We both don the gear, and the lights beam toward the pair of large aluminum surfaces in front of us. One a deep blue and the other a hot yellow, their reflective facades meet our gaze with a flare of twisted rainbows.

“I’m interested in the possibility for people to see the piece as an escape—to see this and be able to think about another place, a sort of imaginary oasis… like a beach, or maybe a desert,” Peterson explains. Mounted cleanly upon the exterior of the courtyard’s wrought-iron fence, the long yellow rectangle brightens up an otherwise dull facade. In the background, its large blue partner rises much higher above passersby’s heads, gracefully scaling the Arts Club’s ivy-covered walls. “How do you make a piece that is for the winter in Chicago?” Peterson muses with a smile. “For me, part of that is taking the short days and making them a positive.” A bus turns the corner and its headlights light up the gray dawn, scraping across the piece and illuminating it briefly like a sunset time lapse.

Constructed from the same massive aluminum sheets that hang as directional signage along highways, Peterson’s paintings create a peripheral landscape from materials that usually serve a purely functional purpose—passersby must now choose to turn and see what they are usually forced to view. “You’re bringing your actual body and perception into the physical act of viewing,” Peterson tells me as he raises his phone to snap a picture with his flash on. Both paintings light up momentarily, glowing intensely like television screens in a dark room. “It’s something I’m still working out, but it’s very interesting, especially in the context of public art.” 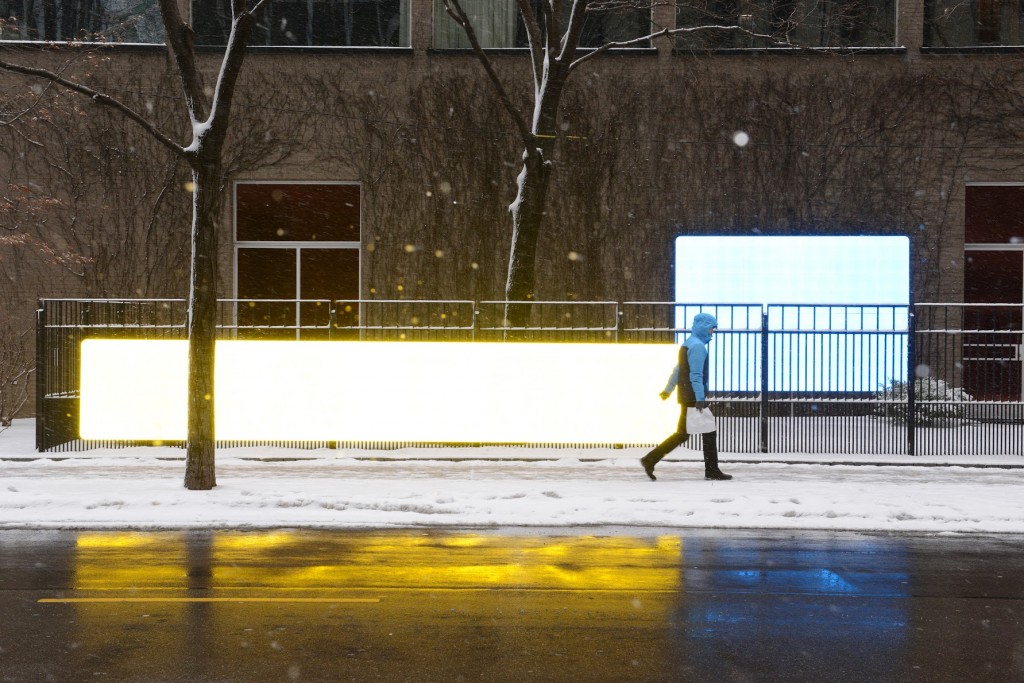 Erik L. Peterson. Installation view of “The Oasis” at the Arts Club of Chicago, 2015/Photo by the artist

An artist known well for his public sculptures and performances, Peterson frequently employs ordinary objects and materials to simulate scenarios that expose the quirks and humors we encounter in our everyday routines. In one work, forklifts dance a ballet around each other in the bustling Daley Plaza; in another, four workers frame a sidewalk with two-way mirrors—as pedestrians mindlessly swerve between them, they are forced to face infinite reflections of themselves. What is easily overlooked and brushed past is suddenly exposed and dissected, and a new set of social relations is created for those perceptive enough to notice themselves existing in them.

As we’re walking away, I turn back for one last look at the installation. For a moment, the yellow sand and deep blue ocean meet, offering a serene moment amidst the noisy, bustling streets of downtown Chicago. (Maria Girgenti)