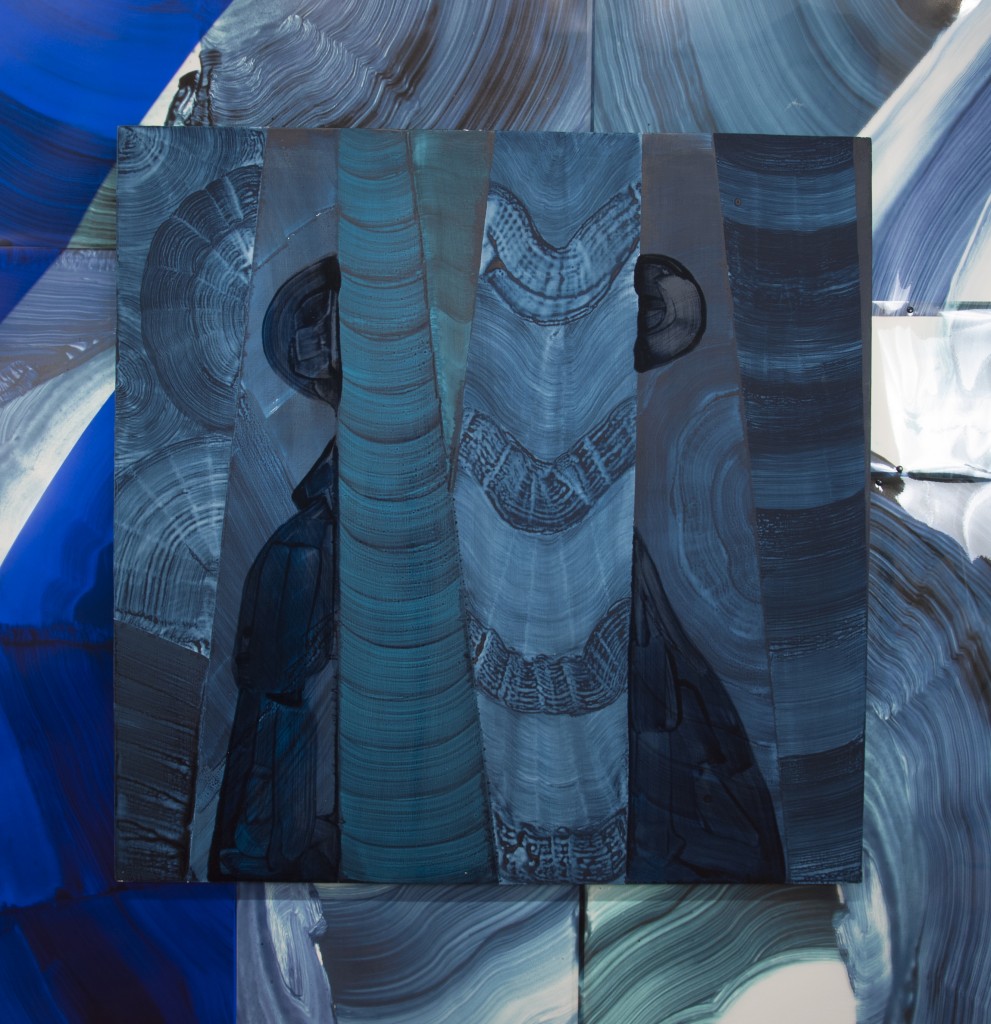 Dutch for “Rainbow Brother,” artist Justin Witte’s “Regenboog Broer” is a visual exploration of pattern, texture, surface and color writ large in the azure hues of Lake Michigan in summertime. Anchored by four considerable assemblages of ink and mylar that reference everything from enlarged brushstrokes to galactic clusters and polished gems, the show is spread throughout the Hyde Park Art Center, but is mostly rooted in Gallery Two.

Effectively a long hallway, the space can be a tough gig for any artist to play. But in Witte’s case, the combination of his assemblages’ large scale and the confines of the narrow passageway makes for some especially tricky viewing. Pieces such as “Zoon and Zonen” or “Landerig” aren’t large enough to be fully immersive, and yet they’re almost too big to gain a comfortable viewing distance on. Consequently, I found myself observing these works at oblique angles, thinking about how their glossy, reflective surfaces and slender edges relate to the green of the floor and the angle of the ceiling.

The twenty-seven small acrylic and laser-cut masonite works that comprise the artist’s “Brushstrokes” series address the space more effectively. Primarily white, but often with hints of red, the pieces are hung at various locations along the length and height of the wall, and their simplified divisions of space via one or two “strokes” conjure up allusions to Matisse by way of Diebenkorn’s late Healdsburg works. Frequently found in pairs, “Brushstrokes” suggest a filial relationship also hinted at in the blue-green “Zonen”—Dutch for “twins”—on the opposite wall.

The deeper meanings of “Regenboog Broer,” beyond an obvious concern for addressing formal issues, are challenging to tease out. The preponderance of the color blue as emblematic of sadness or depression, and titles’ frequent recourse to the word “son” suggests ambivalence on the part of the artist regarding his Dutch heritage. That several of Witte’s works also appear to mimic the surface of something they’re not, seems to reinforce this interpretation. Caught midway between the old world and the new, the real and the uncanny, “Regenboog Broer” reveals its secrets slowly, if at all. (Alan Pocaro)

Through April 3 at the Hyde Park Art Center, 5020 South Cornell.