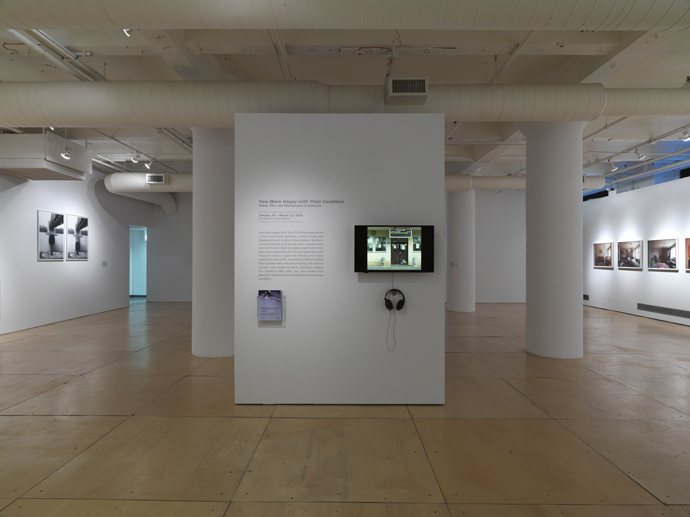 Installation view of “Few Were Happy with Their Condition” at Gallery 400, Winter 2016.

Exploring life in post-communist Romania, a transitional time of immense pressure, disappointment and hope, “Few Were Happy with Their Condition” moves across the social, political and economic circumstances that scarred the country’s past and shapes its present. To address this history, curator Olga Stefan brings together films and documentaries, analog and digital photography and moving-image installations by more than fifteen artists.

Razvan Botis’ short film “Impulse” features two graffiti artists drawing on a wall with cans of aerosol deodorant spray. Leaving a mark that disappears as the spray evaporates, their semi-visible message hovers between the permanent and the temporary. Vlad Nanca captures images of parking spots city residents have claimed with found objects, in his series “No Parking,” considering the sculptural aspect of this practice that is also familiar in Chicago after each heavy snowfall. Bogdan Girbovan plays with notions of individuality and creativity even at the most suffocating circumstances in “10/1.” Depicting life in his building, one of the more than 70,000 identical apartment blocks characterizing midcentury urban planning in the city of Bucharest, the series of ten photographs of studio apartments stacked on top of each other in a ten-floor building, serves as a form of sociopolitical commentary through interior décor. Elsewhere, Stefan Constantinescu addresses social norms that inhibit open communication through the narrative of two lovers in his video “On the Other Side.” Projected at life-size on the gallery wall, the haunting sound of a man banging on a locked door trying to reach a woman on the other side fills the gallery space. 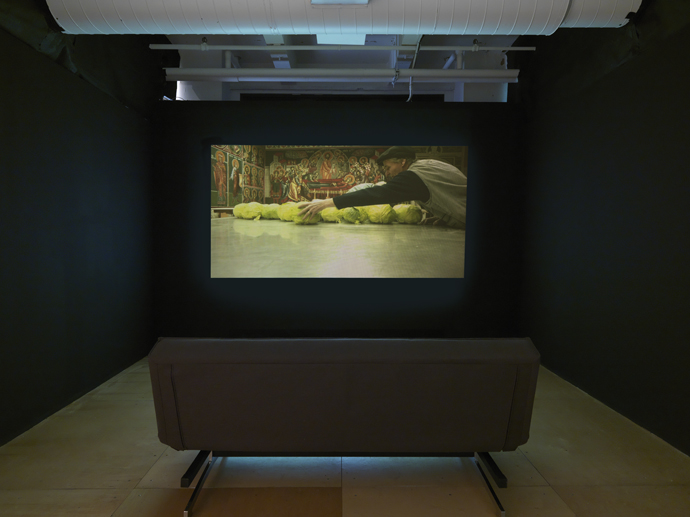 Installation view of “Few Were Happy with Their Condition” at Gallery 400, Winter 2016.

“Few Were Happy with Their Condition” is not about release or liberation from ghosts of the past. It is about understanding a reality of discomfort, of poverty and instability, of voices past but not forgotten that still influence a country’s future. Through an array of enigmatic traces, unsettling photographic imagery and matter-of-fact documentation of Romania’s current conditions, the exhibit takes a step to the direction of lifting the weight of the country’s communist past by representing the trauma that is still highly visible in contemporary artistic production. (Vasia Rigou)